In a town brimming with youth, Reilly’s Bakery, a Biddeford Main Street institution for 100 years, thrives as an old-fashioned landmark.  Confections are packaged with genuine kindness and boxes are delicately tied with string. If the Hallmark Channel came to Biddeford, this is where they’d set up the cameras.

Founded in 1920, Reilly’s Bakery is a family-owned and operated business now in the hands of the fourth generation. Elizabeth Reilly Hussey, 44, took over the bakery with husband Kevin two years ago this coming April.

“It doesn’t feel like work because I love what I do and the bakery has always been home,” she says. 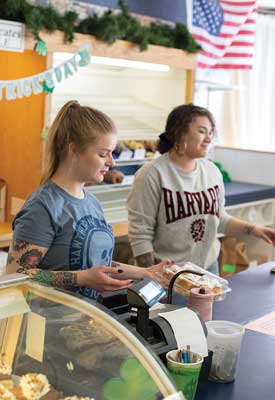 A day at Reilly’s begins around 3 a.m., when the rotating gas oven is first fired up. On a chilly, pre-dawn morning, outside, the festive canopy of white lights drapes atop the bare trees on Main Street. Inside, the early-morning scene is magically warm.

In the corner, a curtained-off area seats customers at a few tables. At 6:30 a.m., there might be a young couple having pastries and coffee before heading to work. And always holding forth are the gaggle of older gentlemen, like Roland and Donald, old friends from the neighborhood who have been meeting there every morning.

“I call them ‘The Board of Directors,’” smiles no-nonsense Hussey, who takes a break to banter with the guys. “They come in at 6:15 and if someone’s not there by 6:45, we’re wondering where they are.”

Center stage stands the large, folding blackboard prominently displaying the daily specials for the week: two-for-one crème rolls, chicken pot pies, 20 kinds of doughnuts. I personally can attest to the perfection of The Old Fashioned Glazed, made with hand-cut, raised yeast dough, fried in soybean oil and drizzled with the baker’s secret ingredient to result in a delicious, icy glaze.

And the pastries: Neopolitans, eclairs, whoopie pies, and swiss rolls are also high popular, according to Hussey.

It’s amazing how much a tasty morsel of a Reilly’s confection can make loyal customers not only satisfied, but also happy. Ask the local dry cleaner and her associate tailor to reminisce about a pastry: “It was a lemon coronet,” recalled Linda, who went to high school with Denise Reilly, Hussey’s mother. “I bought you one, remember?”

“Yes, yes, that was very good,” mused Maria, a Bavarian-born woman who boasts knowledge of what constitutes good pastry.

“Getting pastries from Reilly’s Bakery was always a treat in our household,” recalls my neighbor Spiros, who grew up in Biddeford as the son of one of the owners of the former Wonderbar Restaurant. Like so many, his mother always bought hot-cross buns at Reilly’s every Easter.

“What I remember is the old-school bakery aroma when you walk in,” he continues. “I took my daughters for donuts when they visited a couple of summers ago.”

Reilly’s new management appears to be remarkably similar to the old.  “We honor traditional recipes that are non-negotiable,” asserts Hussey.  “Reilly’s sells the same butter cookies my grandfather introduced in the 1950’s.”

Anything new?  Hussey recently hired Amy Springer, a cake decorator, to make “more of an emphasis on artistic technique.” New, creative cakes take the spotlight on the bakery’s Facebook page. 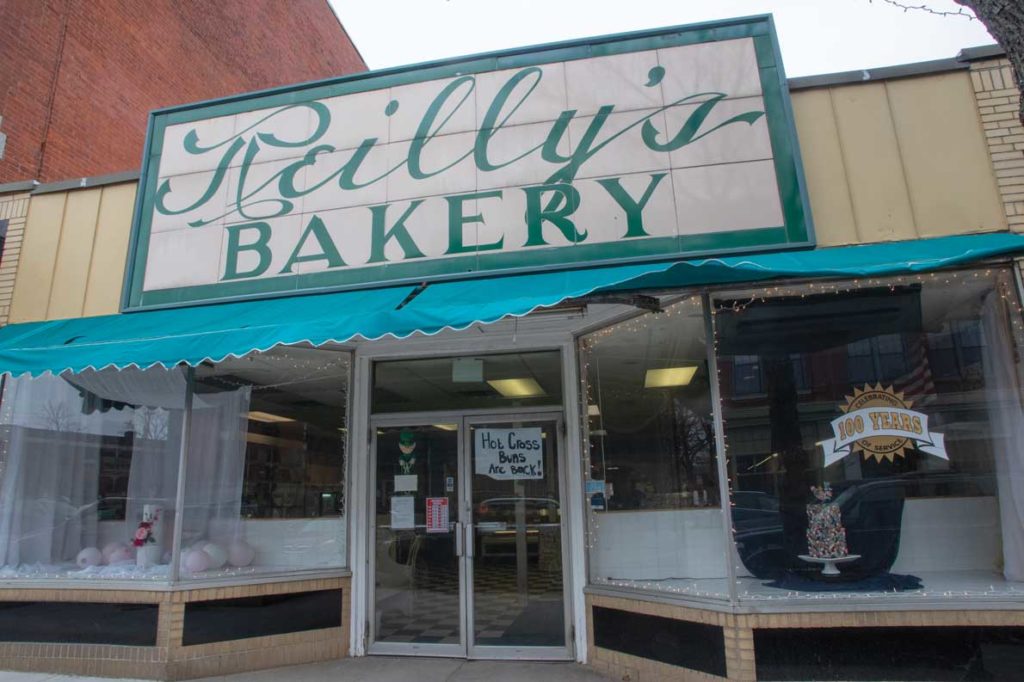