The perception that Maine’s forays into offshore wind power have been on hold aren’t quite accurate, said Jake Ward of the University of Maine. Under the name New England Aqua Ventus I, the university is pursuing siting a floating wind turbine off Monhegan Island as a test for possible further development.

“Someone this morning said this is coming fast,” Ward said of the university’s bid, speaking at a session of the Maine Fishermen’s Forum in Rockport on March 5. In fact, he has been involved in the pursuit of offshore wind power since 2007.

“This is not coming fast,” he deadpanned. “I had kids when this started. Now I have grandkids.”

Several years ago, UMaine had pursued—as Maine Aqua Ventus—siting two floating wind turbines off Monhegan to learn more about the floating technology and the potential to produce electricity. To that end, a one-eighth sized floating turbine was deployed off Castine in 2013, and has since been retrieved.

Ward said the project is now operating as New England Aqua Ventus, and is seeking to site a single, 6-megawatt floating turbine. Late last year, the federal Department of Energy awarded the project $1.4 million for design, and the Maine Public Utilities Commission voted to approve a 20-year agreement for Central Maine Power to purchase electricity generated by the turbine.

Offshore wind is the largest untapped energy resource “by far,” Ward said. He explained how the floating turbine structure will use pre-cast concrete segments.

“We’re very confident it will survive” in the marine environment, he said. “Anything happening in the Gulf of Maine is going to be floating.”

Still, permitting remains to be secured. Fishing interests will be included in weighing proposals, regulators said, but fishing advocates urged those present to be vigilant.

Nick Livesay of the state Department of Environmental Protection said the project off Monhegan will fall under state jurisdiction. The site location law would hold sway, he said, which ensures there will be no adverse effect on existing uses, scenic character, air and water quality, or other natural resources in the area of the turbine.

A project also must conform to the federal Natural Resources Protection Act, Livesay said, and not “unreasonably interfere” with recreation or navigation, or harm estuarine or marine fisheries. A developer also must provide a navigation plan, a fish and wildlife plan, and a removal plan.

Brian Hooker of the Bureau of Ocean Energy Management (BOEM) outlined the federal role in offshore wind. BOEM’s jurisdiction lies in the waters that are three to 200 miles off state land. The multi-phased, multi-year approval process includes planning and analysis, assessments of waters and wind potential, and construction and operation.

BOEM is reviewing the Vineyard Wind project in Massachusetts, and Hooker said a final decision is expected by the end of the year. The National Marine Fisheries Service is part of the review process and is represented on a task force that includes representatives from Maine, New Hampshire, and Massachusetts.

Regulators must consider fishing interests, she said, and “We don’t feel that’s been done very well to date.” Developers use a “divide and conquer” approach, separating states and projects to weaken opposition.

“We’re trying to take the dialogue back,” Hawkins said.

Fred Mattera of the Commercial Fishermen’s Research Foundation, who has fished for 40 years from Port Judith, R.I, urged fishermen to document where they work now to better make the case for mitigation if they are displaced by wind turbines. Turbines have been established in Rhode Island off Block Island.

“You must stay engaged,” he said.

Beth Casoni, director of the Massachusetts Lobstermen’s Association, echoed that view, saying “comments matter” during public review, citing a project area off the Bay State that was reduced by 65 percent because of articulated concerns.

This spring, UMaine’s Ward said, the project will hire a fisheries liaison. 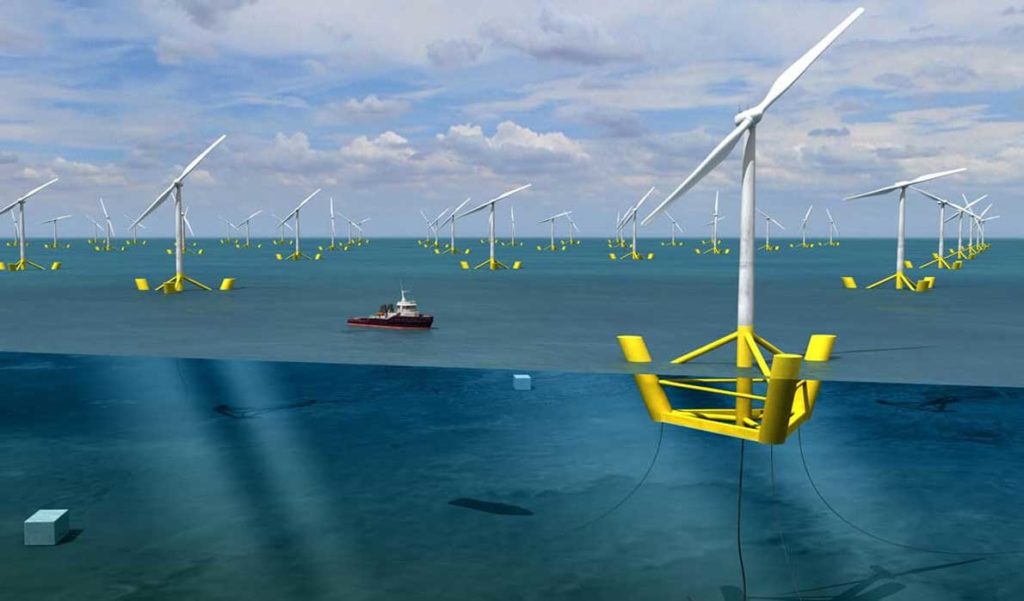