When Superstorm Sandy rolled over the Jersey shore, it washed away some 20 million cubic yards of beach sand. Replacing that resource is not optional, many believe, because decimated beaches kill tourism economies and leave coastal areas more vulnerable to damage from the next storm.

So where does the sand come from to replenish, or “nourish” those beaches? In the future, it may come from the ocean floor.

Sand and gravel extraction in the federally regulated waters three miles offshore is emerging as an issue that is both potentially threatening to the ecosystems on the ocean floor and potentially a boon for the urgent need to rebuild beaches.

The need for that resource is keen in southern New England and southern states, but also is emerging in southern parts of Maine.

Dredging the bottom for sand and gravel began in the 1950s, said Grover Fugate, executive director for Rhode Island’s Coastal Resource Management Council. The practice was more common in southern coastal states like Virginia, the Carolinas, Georgia and Florida, he said.

By the late 1980s, the Department of Interior was providing funds to find and inventory sand and gravel in federal waters, three miles offshore, for beach restoration work in the mid-Atlantic and southern New England states, he said, but the money dried up.

After Superstorm Sandy, states are again scrambling for sand, Fugate said, and the feds are helping them find it. The Bureau of Ocean Energy Management—or BOEM—is awarding $10 million to 13 states, including Rhode Island and Maine, to map and identify sand and gravel in federal waters, he said.

Though Maine has not been hard hit by hurricanes—yet—BOEM announced in August it would give the state $195,000 “to evaluate sand resources for coastal resilience and restoration planning,” according to a press release. The Maine Coastal Program and Maine Geological Survey of the Department of Agriculture, Conservation and Forestry will estimate the need for sand and gravel for beach restoration work, according to the agreement, and the potential to extract it from the outer continental shelf.

Steve Dickson, a marine geologist with the Maine Geological Survey, said a multi-beam sonar device will explore bottom up to 150-feet deep in the federal waters off the coast.

“This is useful information for the potential sand and gravel resource out there,” he said, ascertaining “what’s out there and what it’s useful for.”

Though Maine was not hard hit by Superstorm Sandy, Robert Marvinney, Maine’s state geologist, believes the coast “remains vulnerable to damaging hurricanes,” according to the news release.

“Our beaches are already beginning to suffer,” Fugate said of Rhode Island, “and we’re starting to run out of sand and gravel assets.” Gravel deposits on the land often are in state parks and parcels protected by land trusts, he said, and the public would oppose extraction there.

“It starts pointing more to the offshore environment. There’s sand and gravel out there but nobody knows how much,” Fugate said. Creating an inventory now makes sense, he said, before it’s urgently needed.

“We’re looking at the potential for more severe storms in the Northeast,” he said. “Hopefully, we’re a decade away, but all we need is one big storm.”

Maine, too, faces that threat.

“One ‘super storm’ would be a lot worse than the blizzard of 1978,” Dickson said. A storm in January 1921 produced a 6.5-foot surge, but “we lucked out—the tide was out when the surge came.” If a similar surge coincides with high tide, the Old Port could be awash with seawater, he said.

Not everyone agrees that extracting sand and gravel from the sea floor is a good idea. Fishermen worry that dredging bottom can destroy habitat. Fugate has been meeting with Rhode Island fishermen to keep them informed of the survey work and to learn from them where they fish.

Some of the federal money will help determine how much sand and gravel Maine needs.

“There is demand in southern Maine,” Dickson said. A few beaches south of Portland “could use 3 million to 4 million cubic yards” of sand. The town of Saco considered buying its own dredge equipment, Dickson said, while Wells is hoping to use 360,000 cubic yards of sand being dredged from the Piscataqua River.

This is the first in a series of stories exploring changing ocean uses that are the focus of the regional ocean planning process. For more information about Island Institute’s marine work, contact Marine Programs Director Nick Battista at nbattista@islandinstitute.org; for more information on regional ocean planning, contact John Weber at jweber@northeastoceancouncil.org. 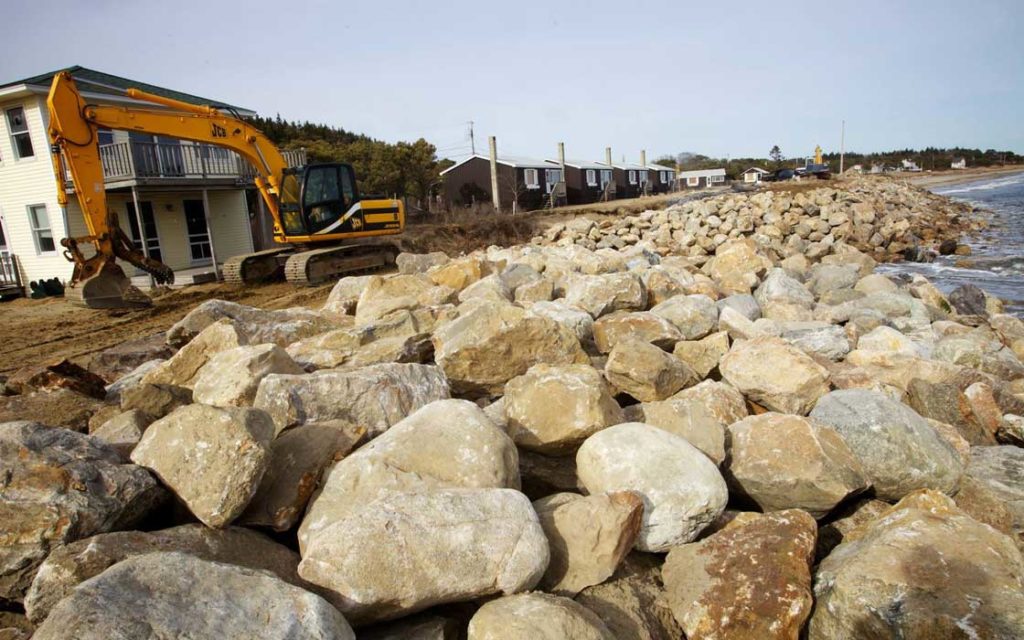 A seawall is built at Popham Beach in Phippsburg in March 2013 to protect homes from the sea.