Note: This story was updated June 16.

By Tom Walsh//Photos by Leslie Bowman

The June 14 arrival of the 785-foot cruise ship Oceania Riviera at its temporary berth on Eastport’s downtown breakwater more than quadrupled the size of the Washington County city’s tallest buildings.

“There are 131 souls aboard,” said Chris Gardner, executive director of the Eastport Port Authority, of the 15-story tall ship, which spent months seeking federal, state, and local approval for the docking amid concerns about unique role cruise ships played in the global spread of the ongoing COVID-19 pandemic. Among state agencies involved have been the office of Maine’s governor and the Maine Center for Disease Control. At the federal level, authorization for docking the ship in Eastport required buy-in from U.S. Customs, the U.S. Centers for Disease Control, and the U.S. Coast Guard.

Those who remain sequestered on the ship are crew members who have been unable to go ashore due to COVID-19 screening logistics. Like dozens of other cruise ships affected by the pandemic-inspired federal “No Sail” order in effect since mid-March, the 15-deck Oceania Riviera had been anchoring off the coast of Miami, Florida. For months, the ship’s owner—Norwegian Cruise Line Holdings—has been eager to move the ship far from what’s known as “hurricane alley,” given the 2020 hurricane season that began June 1.

Oceana Riviera’s crew members still on board were among an estimated 100,000 crew who remain stranded on cruise ships at or near the port of Miami, with some Oceania Riviera crew members telling the Miami Herald that they haven’t been paid in months. Once the ship arrived in Eastport, those on board are not able to go ashore. Upon arrival, more than a few of the crew waved and shouted greetings to those on the breakwater and shot cell phone photos of the Eastport waterfront from the ship’s upper decks.

“There were hundreds of people who came downtown to the breakwater on Sunday to see the ship, and there were many comments about its size,” Gardner said the next day. “Downtown was so busy yesterday that the WaCo Diner sold out of seafood. The overwhelming response has been positive. I’m not hearing COVID-19 concerns.”

The controversial plan generated weeks of sometimes heated debate among Eastport residents. On May 20, the city council voted 4-1 to approve the proposed arrangement, with Hailley Bradbury, the council’s vice-president, voting no. During the council debate preceding the vote, she expressed concerns about the public health and public safety issues related to COVID-19 concerns associated with the impact of cruise ships as global vectors for the ongoing pandemic.

“We cannot say for certain that this is not a risk to the health and safety to the people who live here,” she told the council.

That same day, Washington County had one confirmed case of COVID-19 infection, the lowest among Maine’s 16 counties. That verified infection did not require hospitalization, and the infected person recovered. As of June 16, there have been 101 virus-related deaths statewide, but no confirmed deaths in Washington County related to COVID-19, despite the county’s limited health care facilities and high concentration of elderly citizens.

Bradbury said she could be wrong—and hopes she is—but sees the public health risks as “too high to take the gamble.” She also noted two ongoing civil actions against Norwegian Cruise Line Holdings are being pursued by Florida’s attorney general that contend Norwegian cruise lines had been “less than forthcoming” in efforts to track and contain COVID-19.

“There’s concern about active COVID cases, but there are no active cases on board,” Gardner said. “The assumption seems to be that this vessel must be dirty, that this ship can never be trusted. It’s been suggested that I don’t care about public safety. I do care. It’s been weeks of character assassination.”

‘NOT A TOURISM ISSUE’

For months, the Oceania Riviera debate has consumed Gardner’s time and attention. Some of the comments, e-mails, and other feedback Gardner has received has been helpful, he said. Others have been personal, vitriolic, and racist, including this comment: “Why are we helping these people? They are not even Americans.”

For some years now, the port authority and its small staff have been increasingly successful in wooing and hosting small cruise ships at Eastport’s city-center breakwater. Most of the vessels involved were built to accommodate 400 passengers, not the 1,250 passengers for which Oceania Riviera was designed ten years ago.

“This is not a tourism issue,” Gardner said. “It’s a maritime issue. They approached us, and we were here to help. We’re putting them on the breakwater because it’s a new facility, engineered for access to sewer, which is not available at the cargo port. And having cruise ships moor at the cargo port would involve cost and risk inherent in having to move vessels in and out to accommodate our cargo operations.”

The “long-term parking” agreement involves financial details that remain a work in progress. The port authority has proposed charging $2 a foot per day, with an initial 60-day stay, with additional 30-day extensions as required, payment in advance. Gardner said all revenues will be used to pay down debt on the $18 million breakwater that replaced an aging dock that collapsed in 2017 due to structural issues. 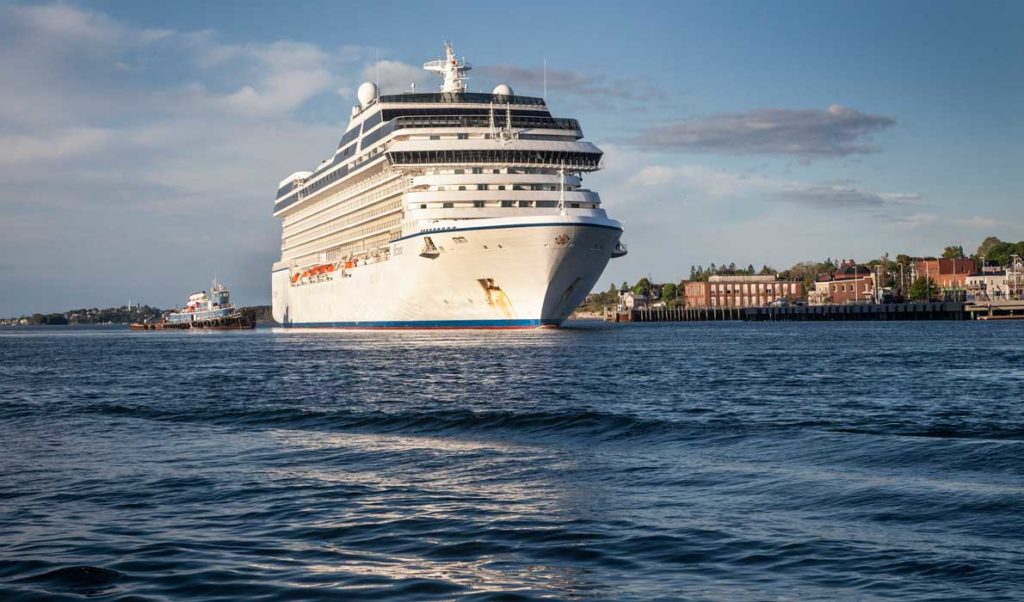