Deese, who had been President Barack Obama’s senior advisor on climate, conservation, and energy policies, was the keynote speaker at an Oct. 25 event in Portland hosted by the Maine Conservation Voters advocacy group, attended by almost 500 supporters.

He related an anecdote about an interaction with Obama, late in the former president’s second term. The president was sitting for an interview with The New York Times, Deese said, and Obama was looking to highlight his administration’s accomplishments.

Deese told the president to explain how, in recent years, the economy had grown by 12 percent, while at the same time, carbon emissions had decreased by 10 percent.

“It’s an extraordinary thing,” Deese said, given that for most of the last 200 years, as manufacturing and other economic activity grew, so did factory and transportation-related fuel use. This “decoupling” of growth and emissions, he said, ends what has always been understood as a trade-off, accepting the environmental harm that comes with prosperity.

Before the interview with the Times began, Deese said, the president asked him to double-check the accuracy of the numbers.

About two-thirds of the way through Obama’s interview with the newspaper, Deese said, the president offered the statistics his advisor had urged him to use. When the interview ended, Obama walked by Deese and said, “You better be right.”

Of course, the numbers are accurate, and this is part of the reason Deese is optimistic about reversing climate change, despite the Trump administration’s decision to withdraw from the Paris Climate Agreement, one of biggest projects Deese worked on while serving Obama.

The stock markets, too, have seemed to endorse a move away from carbon-based fuels. Even though Donald Trump campaigned on promises to roll back air quality rules that restricted coal use, and some of those changes have been made, “In all this period, coal was under-performing in the market,” Deese said.

This is echoed around the world.

In India, new solar power projects are underbidding new coal plants, he said. Car manufacturers in both China and Europe aim to have their fleets off fossil fuels in the next decade.

“The next country that harnesses the power of renewable energy will be the next superpower,” he said. Embracing a post-carbon economy “is definitely pro-growth.”

Deese recalled working on climate change issues at a meeting with other countries, and his colleagues decided to offer a bolder sentiment in a communiqué than they had earlier contemplated, and found it was accepted.

“The momentum behind this is irreversible,” he concluded.

Another source of his optimism: In every county in the U.S., there is 50 percent or higher support for capping pollution from power plants.

Still, there is some reason to doubt change will come.

“Time is not on our side,” Deese conceded. “Climate change is not a second- or third-tier issue,” to be left to policy makers to sort out. “There are villains in this story,” he continued, and he believes they need to be called out by climate advocates.

Deese has visited Maine with his family for years, and said the state cultivated in him a love of the outdoors. His sister, Heather Deese, is executive vice-president of the Island Institute, publisher of The Working Waterfront.

“Maine is poised to be a clean energy and conservation leader,” Deese said, despite opposition from Gov. Paul LePage, but it will happen only by building coalitions.

Borrowing the word from Obama’s autobiography title, Deese told the pro-environment audience they needed the “audacity” to believe the tools exist to solve our energy and climate problems.

Deese was introduced by Lucas St. Clair, who led the charge to create the Katahdin Woods & Waters National Monument. He said the two had become friends.

“Brian is a brilliant man, intensely curious, dedicated to making the world a better place, and has the talent to do so,” St. Clair said. He also cited a 2016 Rolling Stone magazine interview with Obama, in which the president cited Deese:

“The number of young people in this place … are just amazing. Somebody like a Brian Deese. Nobody outside of the White House necessarily knows Brian, must be 35, 37, something like that. He’s our deputy chief of staff for policy. He engineered the Paris Agreement … may have helped save the planet, and he’s just doing it while he’s got two babies at home, and could not be a better person.” 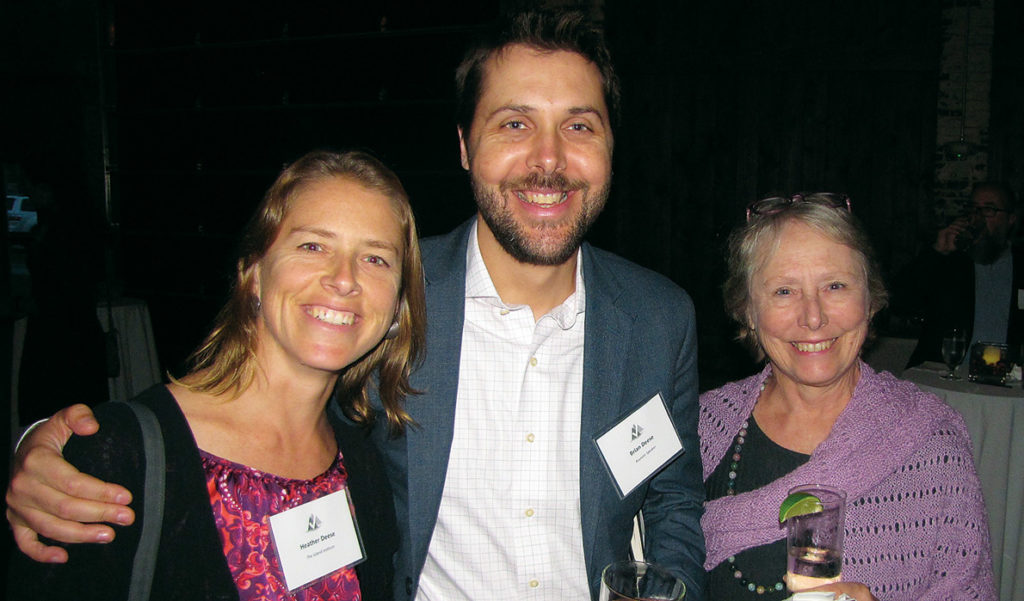