Shakespeare must have been thinking about small-town life when he observed, “All the world’s a stage.” Though the Bard didn’t say so, it does seem some people are better suited to their roles than others.

Dave Macy, 67, has been trodding the boards as pastor of North Haven Baptist Church for almost 30 years. Though he seems well-suited to the part—he’s thoughtful, modest, listens attentively, and displays a sly wit—Macy has not exactly been typecast in the part.

Originally from Great Barrington, Mass., a small town in the Berkshires, he left home for Ithaca College to study music. A trumpet player, he was aiming for a career in music education. But college came with some distractions.

“The drinking age was 18, and so was I,” he says with a smile. The college administration suggested he and they part ways.

He was able to transfer to the highly esteemed Berklee School of Music in Boston.

“I was enrolled, and occasionally attended classes,” he says. He was focused on jazz, though it was a degree in musical education he was pursuing when he left in 1976.

His time in Boston saw another milestone.

“I met this girl from an island in Maine.” That girl, nursing student Kathleen Stone, has been his wife for 44 years. The couple moved to her hometown of North Haven, and Macy got a job at an island boat yard. Eventually, they had two sons, Adam and Seth, who live with their wives and children on the coast.

Music remained a passion, and while singing the high tenor part in a barbershop quartet on the island, a fellow member—then-pastor Stephen Row, whom Macy had recruited for the group—suggested he consider another career.

“He pulled me aside and said, ‘Have you considered going to seminary?’”

It wasn’t completely out of left field.

“I was very active in the church growing up,” Macy said, in what was a Congregational Church (United Church of Christ), and his father had been an interim pastor. And so he agreed to attend an informational conference at Bangor Theological Seminary, concluding, “Well, I owe him that much,” since Row had agreed to join the singing group. The conference left him with questions “still percolating in my brain.”

He enrolled in 1981, and was pleased to find the college wasn’t “a monastery on a hill,” but rather an engaging, lively school. He graduated in 1986, two-thirds of the way through the master’s program, and took a pastorate in East Machias, where he served until 1991; the master’s degree was completed in 1988.

Macy jokes that his life seemed to roll out in five year increments—five years on the island at the boat yard, five in Bangor, five in East Machias. That cadence ended with the appointment to North Haven’s Baptist church.

The building and the congregation have their own mixed pedigree. Though affiliated with the American Baptist Association, the church was built as an Episcopal sanctuary for summer services, with work beginning in August of 1922 with a budget of $15,000. It’s a beautifully designed structure, a bit larger than what might be described as a chapel, yet intimate with an atmosphere conducive to quiet reflection.

The Baptist congregation actually has a building on the island at Pulpit Harbor, away from the village center, and it meets there in the summer when the Episcopal group uses the church building in the village. The two congregations hold joint services twice, in July and August.

Macy describes his theology as “to the left of moderate. I try to be biblically correct as I was taught in seminary,” but that’s tempered by working to respect the range of individual beliefs. “We brand ourselves as ecumenical. No matter where you are in your spiritual journey, you’re welcome here.”

The church uses what Macy calls a “parish model,” that has him as a chaplain to the community at large, “a missionary to North Haven.” That principle has translated to working with both the church’s and community’s food pantries, which, he notes, have seen increased use since the pandemic.

It means directing funds from the Pulpit Harbor Foundation to community medical needs—LifeFlight evacuations, prescriptions, and bills for care. Macy also is a founding member of Southern Harbor House, the island’s eldercare facility.

This approach had Macy joining the island ambulance crew, which provides “the opportunity to be there for people in times of need.”

And, beginning three years ago, Macy adopted a way to broach spiritual and philosophical subjects, and explore civil discourse, with the community in what’s known as “pub theology.” The ritual began in the Midwest, he says, and on the island, it took the form of folks gathering at North Haven Brewing Company.

“It’s about letting people talk. It’s listening—practicing our listening skills,” he explains, and brewery co-owner Ben Lovell co-hosts the weekly gatherings with Macy. “Ben and I take turns with conversation starters. There are rules. We’ll tell you what they are when you break one,” he jokes. “I couldn’t ask for a better co-captain,” he says of Lovell.

“Some nights, we’ll get through all five” of the prompts. “One night, we got through two.” Since the pandemic, the Tuesday night gatherings have moved to Zoom (see North Haven Pub Theology Facebook page to learn how to join in).

“You’re going to get to know each other, and that’s important to me. To get to know your neighbor and yourself,” he says.

Music is still central in his life, as Macy plays in pit orchestras at island shows, and even sits in with middle school band.

“I’m glad I don’t have a degree in music—I can enjoy the music,” he says.

Perhaps surprisingly, Macy considers himself an introvert, and has to nudge himself to visit folks at home. Pitching in on island theater is a way to engage, he says. Yet he also credits more quiet time, the result of the pandemic, with helping him craft what he hopes are well-considered 15-minute sermons, which he shares online.

As Macy approaches the 30th anniversary of his ordination, he is thinking about retirement, and hopes the church will continue as a vital part of North Haven community life.

“Some communities are lucky enough to have one person who seems to get along with everyone and whom everyone loves. Here, it’s Dave. Dave wears many, many hats. The thing is, he makes every single one of them look great.”

“Dave is a spiritual anchor in this community. He is the familiar comforting hand when we are dealing with a tragic loss or the officiant whose quick joke has a whole wedding party in stitches.

“In the past few years, he has been moderating pub theology every Tuesday night. He describes it as an exercise in listening and civil discourse. In many ways it’s a reflection of his own empathy, intellectual curiosity, and love of gathering people together in community.”

“Dave is a performer, and he brings his musical and theatrical abilities to bear in and out of the church. He’s gregarious and kind, and was one of the first people to befriend Bill and I when we moved here.

“In the church, he’s created a joyful space that feels welcoming to all, even those of us who aren’t Christian. Through the church discretionary fund, food pantry, his work with Southern Harbor House, and his role as host of Waterman’s Thursday morning coffee hour, he supports the community and finds ways to bring us together, even virtually.” 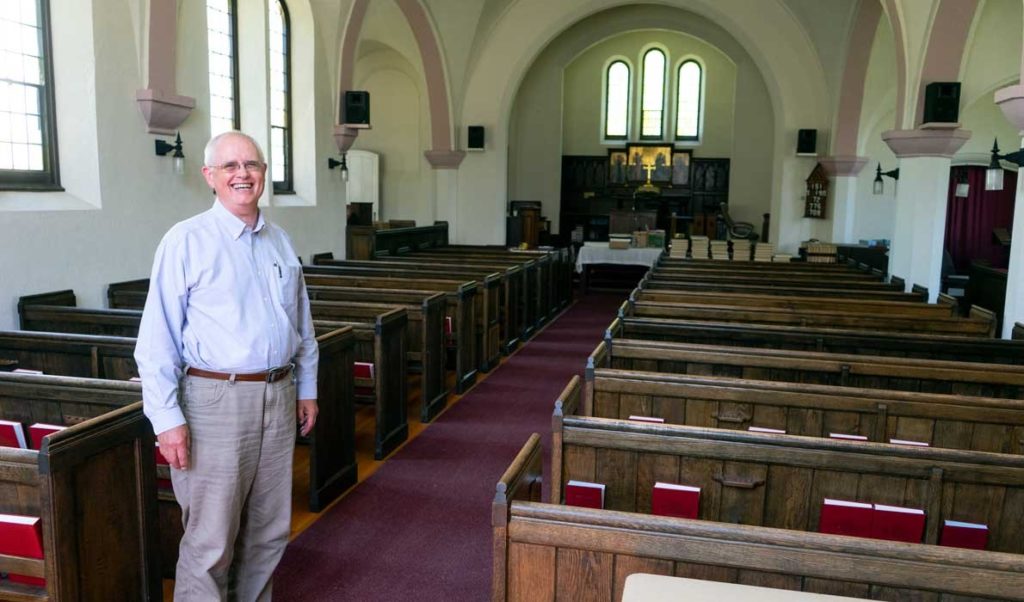