Picture an average day, doing errands. Maybe you have a dentist appointment and will receive that complimentary little bag with a toothbrush, paste, and floss inside. You might then head over to the drug store for a few health and beauty aids, toss that bag in the car and move on to the grocery store for another half dozen bags of comestibles.

The feed store is nearby, so you stop for a bag of chicken feed or wild bird seed. Later, you might drop off your library books and pick up a few more and lay them on the passenger seat in front.

Chances are, whatever your errands, you will probably have an accumulation of items that you can then drive home and unload from your car to your house. If you think about it, your car functions as a gigantic tote bag that carries you and your things around in it. You go home, you unload it… unless you live on an island, accessible only by passenger ferry or private boat.

On Islesford, which is not accessed by a car ferry, there there are a few extra steps to take. Before going home with the results of your errand day, you need to empty out your mainland auto/tote, carry everything down a ramp to a float and load them onto a boat, take them off the boat at the other end of the commute and put them in a vehicle to drive home before finally unloading at the house.

If it is within 10 or 15 minutes before the boat departs there are usually other passengers on board who are willing to lend a hand. Not always, though. You might be the only one around at that moment, so, after lugging stuff down the ramp to the float, you carry each load of items two steps up to the side deck of the boat and then two steps down to the main deck.

On board there is an informal system of where those bits and pieces go. Little Cranberry stuff on the port side and Great Cranberry on the starboard. The middle of the deck is kind of a no-man’s land where everything mixes when the boat is full. So, when we stop at Great Cranberry first, the Islesford passengers can be seen peeking through the windows or going out on the deck to help so we can make sure our own bags don’t get off by mistake.

Wise islanders carry tote bags with them when they leave the island for the day and maybe even keep a few extra in the car. We’ve been doing it for far longer than it has been considered trendy or green. With all that lugging, the reusable bags hold up much better than paper or plastic. There is some truth to old comment that, “If you live on an island, you can wear out a loaf of bread before you get it home.”

Cindy Thomas has been sewing up tote bags from recycled bird seed bags for the last two years. They’re colorful and you can set them down on wet pavement without worrying about them absorbing water. Every now and then she makes totes reusing the large salt bags from the fishermen’s co-op. It’s a lucky person who manages to buy one. Their longer length and width comes in handy.

Most of us have an eclectic collection of bags which makes for a bit of frenzy when unloading a crowded ferry. My mishmash of bags look sort of like everyone else’s. It helps to put your name and phone number on your bags.

My friend Katya has been smart about her bags. Last fall she saw some colorful totes with zippered tops she really liked at Marden’s for $6. She watched and waited for the price to come down to $2 and then bought a supply. “I don’t like how it looks to write my name on a bag,” she said. Now she doesn’t have to because they all match. No one else has bags like hers.

One of my favorite totes in my collection is a large monogrammed LL Bean canvas bag with a zipper. These can be pretty pricey to buy new, especially compared with the 99¢ to $3 reusable options, but if you shop any of the LL Bean outlet stores you will find a section with rejected or returned monogrammed canvas bags at reduced prices.

When I saw this one, I knew I had to have it because there was no one living in our little five-island community who matched it. In one glance, I know it’s mine. In a lovely pink script, identical in color to its handles, the sewn monogram reads, “Mrs. Hedges.” 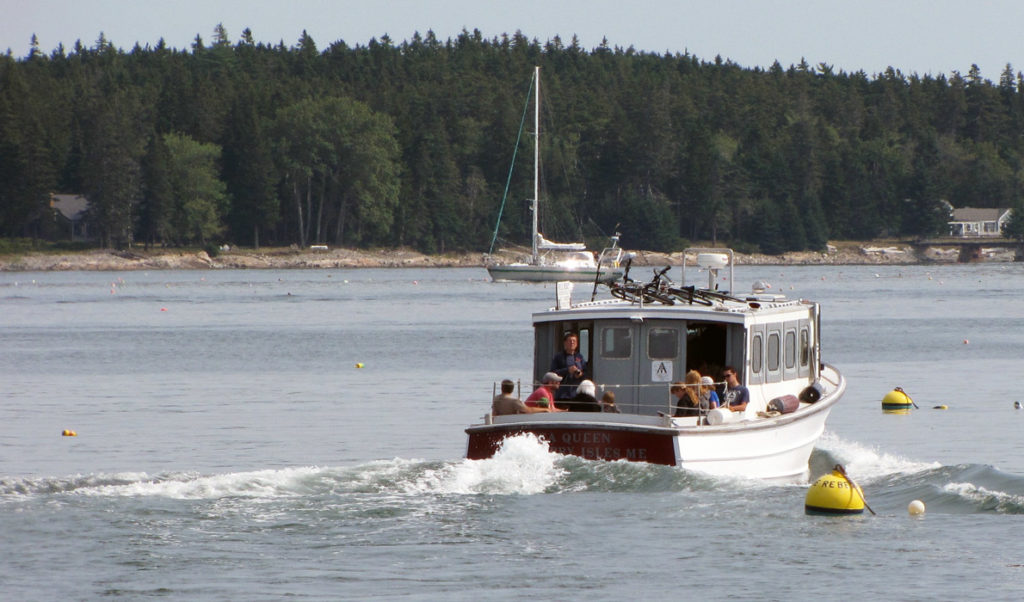