He did not seem repentant.

Thomas said the law allowed one dog or cat in a nursing home.

“We decided to bring in lots of dogs and cats, and hundreds of parakeets and two rabbits we were assured were both female,” Thomas said to laughter.

Chickens were rolled down the hall on carts to allow residents to harvest eggs. Staff plowed up the front lawn to create vegetable gardens, and “about a thousand indoor plants” were placed around the building.

Such additions humanized the institution, Thomas and other speakers at the conference said. But rules continue to constrict the human spirit. In one home, another speaker reported, elders had baked cookies, but a regulator said the food could not be consumed because the residents were not certified food handlers.

Thomas, a nationally renowned writer and speaker on elder issues whom the Wall Street Journal named as one of the top ten people shaping aging policy, described himself as a geriatrician.

A graduate of Harvard Medical School, Thomas intended a career as an ER doctor, but took a part-time job in a nursing home.

“I fell in love” with elders, he said, “and it changed my life,” emerging as “an elder whisperer.”

Specifically, Thomas founded The Eden Alternative, an international nonprofit that works to establish a new model for elder care, fighting what it calls “the three plagues of loneliness, helplessness and boredom” while creating elder-centered community.

“Medicine is silent on this,” he said. Eldercare should address the question, “Do you have meaning and purpose in your life,” he added.

Thomas also established the Green House Project, a nonprofit that supports an eldercare housing model in which residents each have a private bedroom and bath, but join in to do cooking and other chores, as they are able.

“You hear the clattering of dishes, smell the food, and residents gather for meals around a big wooden table,” he explained. “Sharing good food in good company creates ‘convivium,’” a sense of well-being and connection.

In many institutions, childcare is provided on site, giving elders opportunities to mentor and care for children and providing children with surrogate grandparents.

“The biggest changes come out of the smallest things,” Thomas said.

And the changes at his nursing home were measurable. Medications per elder dropped by two-thirds and mortality rates dropped by a third.

“People who weren’t walking, started walking,” and those who had been staring blankly began seeing the world again, he said.

Islanders face more daunting eldercare problems than most. Those who have lived for 75 or 80 years in these small, close-knit and geographically isolated communities rightly resist moving to a mainland institution, where visits from family and friends are prohibitive due to ferry schedules and weather.

In a short documentary, directed by Hannah Pingree, an organizer of the conference, North Haven residents talked about the power of place in their lives, describing the sights and even the smells that were familiar elements, which they did not want to leave in old age.

But whether it is islanders or others who must spend their last days in large institutional settings, Thomas had strong words for that model.

“Americans wandered down a dark road when it started using mass incarceration. A world where our elders are taken from us makes us less human,” he said.

Jessica Maurer, director of Maine’s Area Agencies on Aging, talked about regulators whose mission has them valuing safety over quality of life, which she summed up as, “You may be miserable, but darn it, you will be safe.”

Chip Teel, a physician from Damariscotta, called the approach he and others want to return to “the dignity of risk.” Under that model, a resident is allowed to sleep late if that is her routine, not be awakened and forced to take medication. The resident is able to walk without assistance if he desires and his family approves, even though he may stumble and fall.

“We decided we didn’t like the extended family,” Maurer said, and so the current institutional model, rather than accepting elders as equal members of the household.

So why are models of care like those advocated for by Thomas so rare?

“Real, genuine human care does not scale,” he said. “Care and treatment should not be confused.”

At the end of the conference, a local man—Del Webster—talked about the Ivan Calderwood Homestead, an eldercare facility on Vinalhaven. Webster knew Calderwood personally, often visited him, and recounted washing his feet and clipping his toenails.

“He loved to have his feet washed,” Webster said, and urged those attending to visit elders.  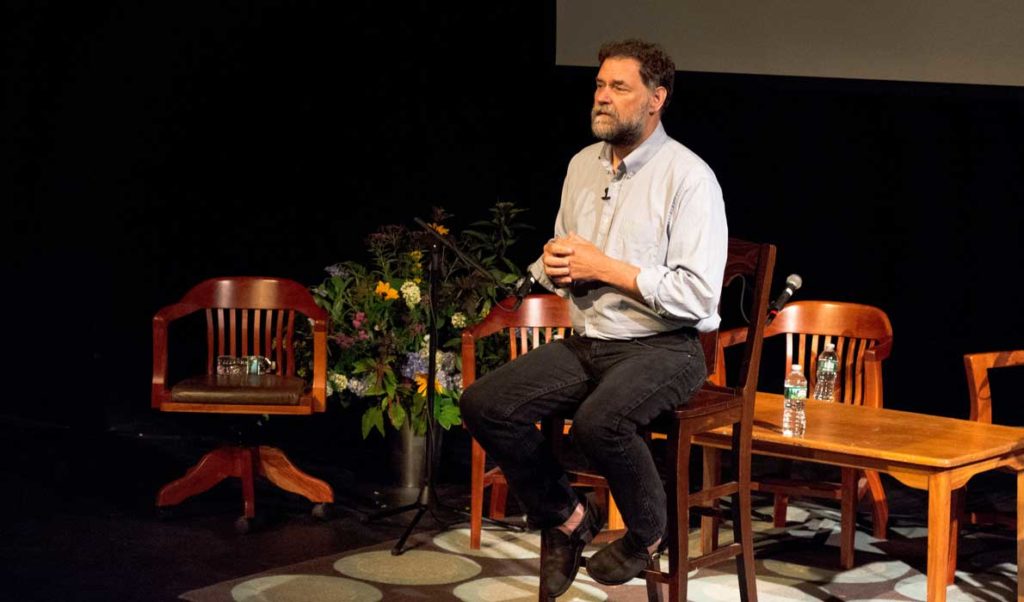