The trip from the Portland waterfront to Peaks Island is short—less than three miles due east. The Machigonne II, a 399-passenger ferry operated by Casco Bay Lines, makes the 17-minute crossing over a dozen times a day.

But plans to replace that vessel are following a more tortuous route, and alarming some island residents.

Launched in 1987, the Machigonneis at the end of its useful life span, according to Hank Berg, CBL’s general manager. Designs for a new ferry have not been finalized, but the Casco Bay Island Transit District, a quasi-municipal state agency that operates CBL, is considering building a vessel that would accommodate 599 passengers, and four more vehicles than the current capacity of 12.

The $10 million ferry would be funded mostly by federal grants, and begin operating in 2021. Berg and the transit district’s board of directors believe the larger vessel is necessary to handle increasing demand for travel to and from Peaks.

“We’re trying to make fiscally responsible decisions,” he said, “so we have a ferry that will last for planned growth over the next 30 years.”

But islanders like Lisa Penalver and others worry a bigger boat will result in larger crowds of summer visitors, who will threaten Peaks’ natural resources, leave more trash, and overwhelm the 760-acre island’s streets, parking, and public restrooms.

“What’s happening is dangerous for the island,” said Penalver, who’s lived on Peaks for 12 years. “It’s the equivalent of running a superhighway through our community.”

Once known as “the Coney Island of Maine,” Peaks is part of Portland and home to scenic beaches and trails, several restaurants and bars, an inn, and a variety of small shops, art galleries, and museums.

With the arrival of warm weather, the island’s population of less than 1,000 mushrooms to as much as 4,000. Many others come for a day’s visit, so ferry ridership increases even more dramatically. Last year, according to CBL, it carried 30,000 passengers to Peaks during the month of February—and 139,000 in July.

On about 70 trips a year, the number of passengers waiting to board the Machigonneexceeds its capacity, and CBL scrambles to pick up the overflow in one of its four other ferries.

Penalver believes there are better ways to handle the growth. For example, she says, a ticket reservation system could help schedule ridership and avoid maxing out the Machigonne.

“We need to manage the demand in a way that doesn’t destroy the resource, that is, the island,” she said.

Berg says such a fix doesn’t change the underlying need for a larger ferry.

“A reservation system could work for any vessel. But whether there are reservations or not, the capacity issues will be there,” he said.

“I know there’s a perception that a bigger boat will mean more people will come, but I don’t subscribe to that theory. I think the demand is the demand. And as a transit district, we have the obligation to be able to provide transportation for that demand.”

Berg also argued the ferry plan is a response to needs islanders expressed in a survey and a public forum, both conducted in late 2017 as the district board studied options for replacing the Machigonne.

“Some people wanted a bigger boat, some wanted a smaller boat. There was no real majority. But no one wanted to wait in line.”

Peaks resident Kim MacIsaac is skeptical about the survey—whose results have not been widely distributed—and other steps the transit district has taken.

“A lot of people were very opposed. But everyone wants more information. No one here is exactly sure what’s going on,” says MacIsaac, a fourth-generation islander. “The board hasn’t shared much of anything.”

Penalver serves on the Peaks Island Council, an advisory body to Portland City Hall, and says the council is launching a survey of its own about the ferry replacement.

Meanwhile, CBL is still developing the hull and propulsion designs for the new boat, and expects to unveil the plans for public comment in the next few months, according to Berg. “Nothing has been set in stone,” he said.

The board will have to approve the plans before the boat can be built. If concerns remain about overcrowding on the island, Berg added, the board can always limit the number of passengers embarking on the new ferry.

“But at least we’ll have the capacity there,” he said, “now and for 30 years from now.” 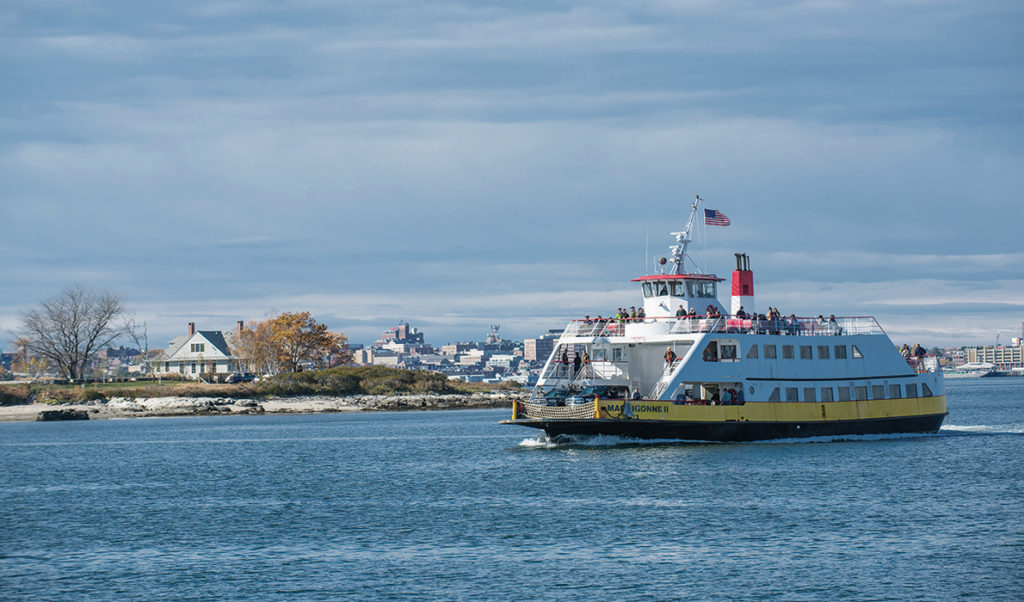