CASTINE — It’s more than a building.

That was the point speakers made at the May 1 dedication of Maine Maritime Academy’s new ABS Center for Engineering, Science and Research.

The center is the first new academic building constructed on campus in the last 30 years. It’s attractive and well-integrated into the snug campus.

But what brought state leaders like Gov. Paul LePage, House Republican Leader Rep. Ken Fredette and a handful of other legislators to the dedication is what the building represents.

MMA, funded in part by the state, is well-poised to offer students access to so-called STEM education—curricula that includes science, technology, engineering and mathematics, all of which are valued by the tech sector of the economy.

“The ABS Center will provide students and faculty with the modern labs and research spaces that they require to support this work, enhance our applied science program and strengthen MMA’s reputation,” Brennan said.

In the last year, Eaton had to travel to use another facility for his work, but now, such research can be done on campus at the ABS Center, he said.

The ABS Center, Brennan said “is likely one of the most important initiatives MMA has accomplished in this decade.

Building the center, which cost $14 million, including the planning and design phases, also represents a new model.

Part of the funding came when Maine voters approved a $4.5 million bond in November 2013. Fredette worked with MMA officials to get the request before voters.

And ABS—the American Bureau of Shipping, a nonprofit founded in 1862 that works to maintain standards related to maritime endeavors—donated $2.5 million to the building fund, as well as $600,000 to support research.

Those contributions were “the largest corporate gifts in MMA history,” Brennan said.

Robert Somerville, the former CEO of ABS who graduated from Maine Maritime in 1965, spoke at the dedication. ABS has donated $21 million to maritime-related education work around the world, he said.

Several other foundations and many individuals donated to the building fund.

LePage, a vocal proponent of STEM education, said the ABS Center is “more than a building. It’s a statement to the quality of education being given,” he said.

“You’re staying ahead of the cutting technology of the world,” LePage told MMA officials.

The governor recounted a visit to Iceland as part of a trade mission, and while there, seeing the academy’s training vessel, State of Maine, make a call at port.

“It was a reminder of how important Maine Maritime is to our world,” he said.

LePage talked about his plan to offer interest-free loans to students pursuing STEM education. He also cited Money magazine’s top ranking of MMA among public colleges for its academic offerings and for being a “bargain” on tuition.

“Coming from Marden’s,” the governor quipped about the bargain status, “that’s important.” 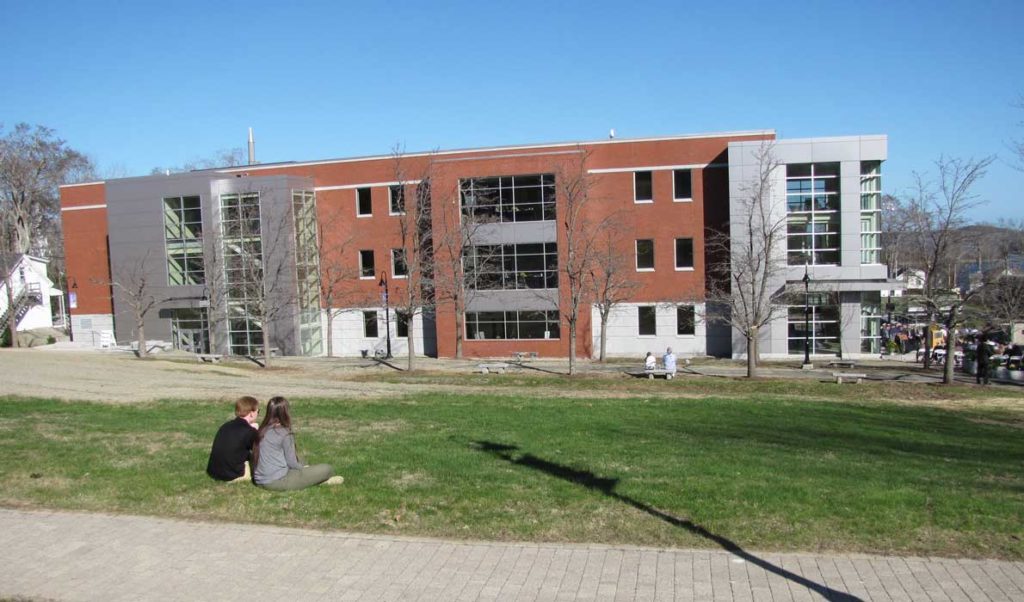 Two young adults sit on the grass in front of Maine Maritime Academy's new ABS Center during the dedication ceremony.