The reasons for providing daycare and preschool services on an island are many, and they are compelling. But the new Islesboro Pre-School facility came to fruition because island leaders asked for help and got it.

Bruce Claflin, who led the fundraising efforts for the facility, says the services are important because structured and age-appropriate education during the first five years of a child’s life help ensure later success. During these years, a child’s basic cognitive, social, emotional, and physical capabilities are established, Claflin learned while investigating the project.

In fact, being in a positive early learning environment has been shown to provide a seven-fold return on the cost of such programs.

And offering reliable childcare and preschool programs helps lure and retain adults who want to live and work on the island. Claflin notes that dual-income parents are the norm, and on Islesboro, many parents work multiple jobs, often six or seven days a week in the summer.

But the facility, which will host a grand opening on Aug. 13, is in place because people asked for help.

Arch Gillies, chairman of the town’s selectmen, asked Claflin to lead the fundraising efforts for the new facility. Claflin, who moved to the island in 2010 and retired there a few years later after a career at IBM, Digital and 3Com, agreed.

Because islanders are facing a property tax increase with construction of the voter-approved broadband network, Claflin and others targeted the summer community. The effort succeeded in raising $750,000.

The 2,000-square-foot building was projected to cost about $600,000, and the three acres of land on which it is sited cost another $50,000. For the last few years, residents have agreed at their annual meeting to dedicate $65,000 for salaries of the center’s staff.

While the facility is new, the service is not.

Claflin explains that in 1981, a group of young mothers created a daycare and preschool program, eventually incorporating as a nonprofit. It began in the basement of the library, but later, the town let the program operate on a second-floor of a town building, and the nonprofit hired a teacher.

“It ran that way for years and years,” he said, but with the ups and downs of fundraising, the program often suffered. The five-member board overseeing the program had to include four parents of children attending, and when those children went on to public school, the parents usually left the board, creating more flux, Claflin said.

The board now includes 14 members “with a variety of skills and experiences,” he says.

The program will expand to include birth-to 3-year-olds, along with the traditional 4- and 5-year-olds who attend preschool.

Claflin asked another islander to pitch in for the cause.

Nancy Wuori, who retired from 24 years as an elementary grade teacher at Islesboro Central School, was persuaded to join the effort.

“We approached her and said, ‘We really need your help,’” Claflin said, and she agreed to become director of the preschool.

Wuori gave a tour of the almost-completed building in late June. An entrance hall opens left and right onto large rooms for the younger and older children. There are changing rooms, bathrooms, a kitchen area, and a washer and dryer. A head teacher will be hired for each age group, while an aid will move between the groups as needed, she said.

The student population averages about ten, Wuori said, though she observes that the island seems to enjoy a baby boom in the middle of each decade. The plan is to open the center from 8:30 a.m. to 3:30 pm., Monday-Friday in the summer months; in the winter, the center probably will be open four days a week, she said.

Claflin notes the building “was purpose-built as a pre-school,” which contrasts sharply from the program’s current home, which is accessible by a narrow stairway. State regulations prohibit children under the age of three from being housed in second-floor spaces.

Islander Larry Wonson was the general contractor on the new building. Claflin’s wife, Kerry, was recruited to be the nonprofit’s secretary and to oversee the construction.

Though summer residents were targeted for donations, Claflin is quick to note that locals were generous with donations and in-kind services.

“There were so many volunteers,” he said.

The location of the facility is part of a larger plan, Gillies explained. With the community center around the corner, and the Boardman Cottage eldercare facility and the town office a stone’s throw away, selectmen hope this part of the island will become more of a village center. 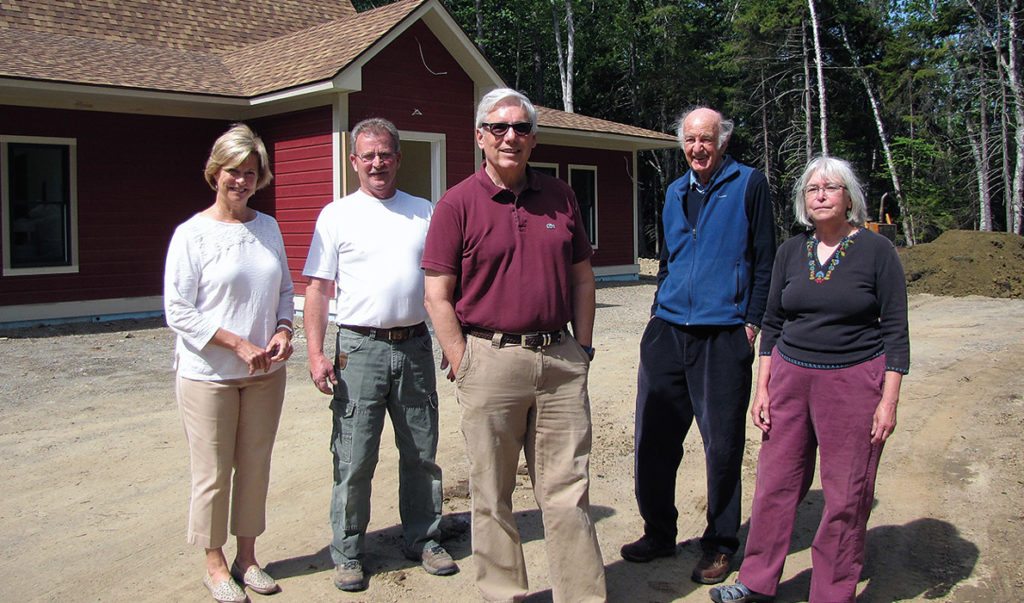