A year ago, my wife and I returned to Nantucket to celebrate our 35th anniversary. It was our first time back since I began working at the Island Institute, and so it was with different eyes that I took in the beauty, the history, the wealth, and the “islandness” of this community 30 miles out to sea.

A quote from a story in The Working Waterfront from a few years back echoed in my head, a comment by a young lobsterman who now serves on Vinalhaven’s board of selectmen.

“If lobstering goes, we’ll become another Nantucket. It’s a major worry,” he said.

That concern is legitimate, and “Nantucket” as a symbol of an undesirable island fate is understandable. The median house price there, said to be the highest in the U.S., is well over $1 million. The year-round population of about 12,000 swells to over 50,000 in mid-summer. There seem to be more folks wandering the streets in recent years since high-speed, catamaran ferries now make day trips possible. 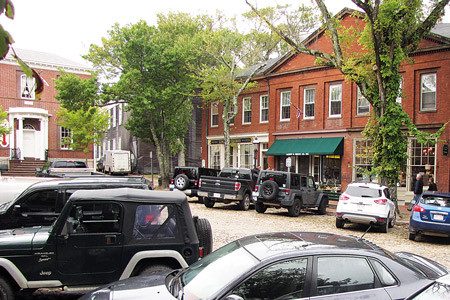 Main Street is busy even in late September. The building at left is the Pacific National Bank, its name an acknowledgement of where islanders made their money.

Conspicuous, ostentatious wealth is on display, both in the large, seasonal houses that have been built outside of the downtown and in the manner of some visitors. We love the restaurants, which are considered among the best—and priciest—in the Northeast. On a visit, maybe 15 years ago (we go every five years, which is all we can afford), as we eagerly devoured the last crumbs of our entrees, we noticed a group at a nearby table who indifferently pushed food around their plates, before allowing a waiter to carry it away, half eaten.

The wait staff is Nantucket’s history reversed; instead of island natives sailing the globe in search of whales, the world comes here to work. Eastern European women work the tables at the high-end places. I’ll ask where they’re from: a young man on this visit said he was from Moldova. In a pizza place outside the downtown a waitress told me she was from Nepal. A woman working at a B&B we stayed at several years back was from Jamaica.

Every few years, though, a dormitory sort of building is discovered where off-island workers are found living in terrible conditions.

On our first visit in 1981 on our honeymoon, we bicycled from the downtown village to the eastern end of the island. The autumn wind blew dark clouds along the horizon, with intermittent sunlight turning the salt meadows to gold. In 1991, that same bike ride meant slowing every few hundred yards to carefully cross the entrance to a brick-lined cul-de-sac of four or five reproduction homes done in the Nantucket style. The late 1980s building boom had hit.

So what, beyond the restaurants, do we love? The downtown is like stepping back in time. Houses, which sit just above the sidewalks, date to the 1700s and earlier, with classic New England architectural style. The silvery, weathered cedar shingled buildings may have given the island its nickname, the Grey Lady (or it was the prevalence of fog). The commercial district is a mix of brick buildings and older, wooden-frame inns. Some of the pavement has been scraped back to reveal cobblestones.

One of my favorite activities is to wander the streets at night, trying to get lost. We turn left, left again, then right, then follow a darker street up a hill, then right again. Wander too far and the houses are fewer, with more land between them. We listen for the fog horn, or head downhill, and invariably find our way back to Main Street. I can almost convince myself the year is 1850.

The historic district is strictly regulated, with a few siding materials and even paint colors—“Cottage Red,” “Hamilton Blue,” “Quaker Gray”—on an approved list. So not only won’t you see double-wides, but every door, hedge and six-over-six window is in perfect, if historic, shape.

Nearly half the island is conserved as open space through a land bank group that formed in 1983. It’s funded by donations and a real estate transfer tax. The island is rimmed with sand beaches, which are easily accessible.

Do these qualities sustain an authenticity? Yes and no. 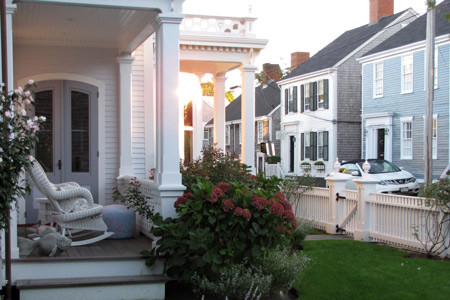 A late-afternoon view of Fair Street.

I’ve tried a couple of times to get nationally renowned history writer and Nantucket resident Nathaniel Philbrook to write an essay for our Island Journal, dangling the Vinalhaven man’s quote as bait. It almost worked. Philbrick responded to my query saying that he did indeed have something to say in response to that “fate worse than death” observation, but he was too busy with book tours. (By the way, Philbrick’s In the Heart of the Sea, the true story of the whaleship Essex, which inspired Moby Dick, is highly recommended, both as a page-turner and an insight into Nantucket’s history. Skip the movie, though. It’s awful.)

The public high school has about 400 students, an indication that families do indeed live here year-round. Someday, I’d like to visit in February, just to see what the town feels like when the locals are in control.

In 1988, while working at the Belfast weekly paper, I interviewed an African-American man who was the first of his heritage to be chairman of the Democratic Party in Waldo County. He and his wife had retired to Searsport from their native Nantucket. When I exclaimed my love of the island, he looked stricken, and said, “Isn’t it awful what’s happened to it?”

After some confusion, I realized he meant that the island had been over-developed—a decade before we’d visited.

And that’s the lesson, I guess. Market forces—people loving to visit or stay in Nantucket and Vinalhaven—will bring change. We loved the island, circa 1981. He felt it had been ruined by that time.

That change can’t be stopped, but it can be managed. Along with its strict design standards, Nantucket has an ordinance that prohibits chain businesses from operating there. Affordable housing remains a challenge, but that could be funded by taxes on inns over a certain number of beds, or even a prepared food tax.

And another lesson: Nantucket is so wonderfully preserved in its 19th and 18th century splendor because when the whaling industry died, the island became a ghost town. It was only in the 1930s that community leaders decided their best bet was to become a tourist destination.

I like Vinalhaven just as it is. I like the grittiness of the working waterfront you pass as you walk from the ferry terminal to the village. I also like the comfortable rooms at the Tidewater Motel with their front-row deck chairs on the harbor, and walks through the Lane Island Preserve, often without seeing anyone else. And I like that I can dress in my less-than-chic clothes and not feel like I’m being judged.

But it will change. Tourism and seasonal home ownership already play a significant role in the island economy, and it may be greater in the coming years.

I hope Vinalhaven doesn’t have to choose between ghost town and Nantucket. But in five years—God willing—my wife and I will return to the Grey Lady, as will 40,000 like us.

Tom Groening is editor of The Working Waterfront and Island Journal. He can be reached at tgroening@islandinstitute.org. 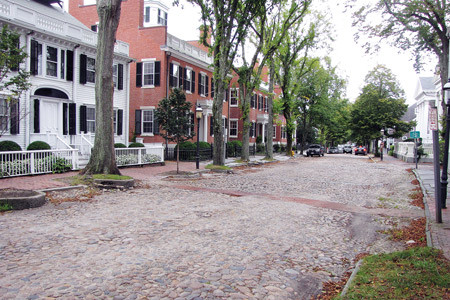 Nantucket’s upper Main Street, with the so-called Three Sisters, brick houses built by a father for his three daughters. 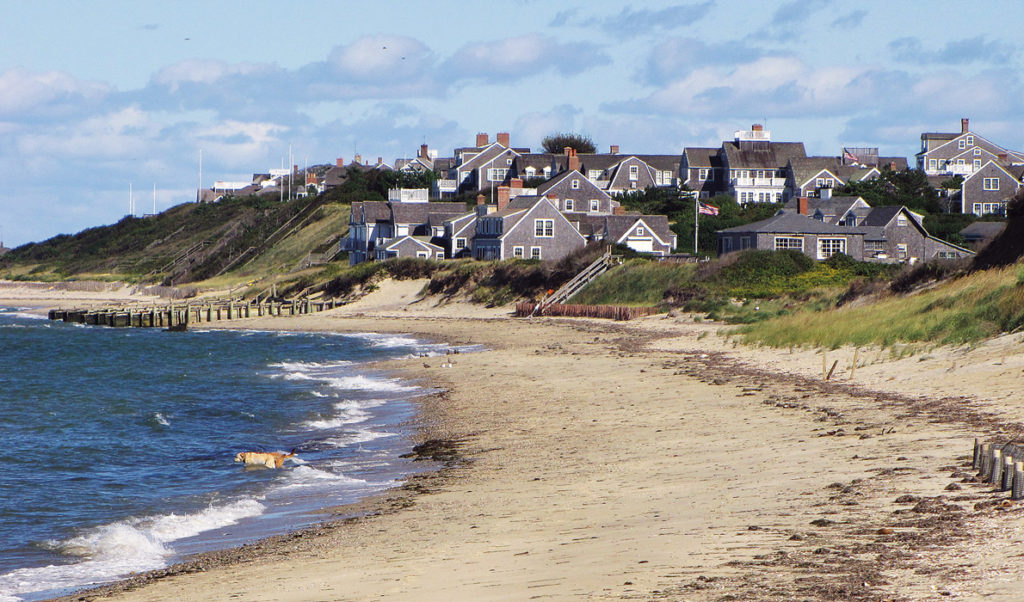