The tiny northeastern seacoast island of Nantucket, 43 square miles, and the giant, “Upper 49th” state of Alaska, 663,237 square miles, are about as dissimilar as could be. They don’t share the same boarding house at all geographically, demographically, economically, and culturally. Yet the two lands, cherished symbols of pristine seascapes, landscapes, and rugged individualism, share some curious similarities. The drive of their peoples, their self-image, and self-conceits are mirror images of each other.

The inhabitants of Nantucket and Alaska—or, as I call them, “Nantaska”—are proud of their “otherness,” their lifestyle, hardships, and heavy weather, and of the sentimental place their homelands hold in the minds of many absentee Americans. Many who have planted a stake in one place or the other share the same inner conflict of soaking in the natural beauty while working it to its fullest.

Whether in resource extraction or tourist promotion, similar social tensions characterize the two lands. The push-pull between conservation and exploitation, between preservation and development, are stressers in each place.

“It’s being at once removed, of being on the periphery, of being acutely subject to, and daily influenced by the whims of nature,” says Nantucket resident Pete Howell, who shed his international banker life 20 years ago for the appeals of island life.

A similar sentiment drove a New Englander north and west. “It was the convergence of migrants and natives when all wanted to be close to the land,” recalls Jennifer Johnston of her move from Vermont to Anchorage in 1975, and her range of activity since as a ski instructor, survival trainer, and now a member of the state legislature in Juneau.

It may be more than coincidental that state abbreviations and aeronautical charts show only one capital letter separating Alaska and Nantucket—AK and ACK. Maybe some heavenly scribe or geographer had some of the close connections in mind.

Alaska and Nantucket both come from Indian names.

The former was initially called “Alakshak” by the offshore Aleut islanders, meaning the “Great Country” well across the waters. Nantucket comes from the Wampanoag tribal name of “Nantocke,” meaning “in the midst of waters” or “faraway land or island.” Both places are separated literally and figuratively from the Mother Ship of the 48 states: Nantucket by 28 briny miles of Nantucket Sound, and Alaska by the 750 miles from its closest U.S. neighbors.

As it happens, it was a very big fish, technically a sea mammal, that first tied these disparate places together. 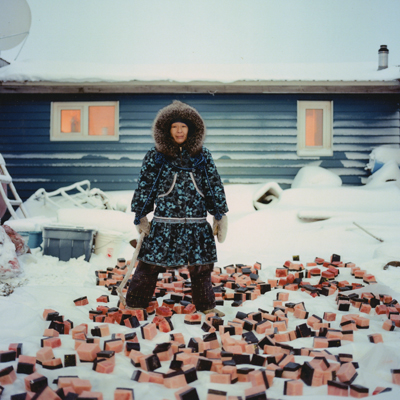 In 1848, when whaling was still the sine qua non of Nantucket’s prosperity, the most intrepid captains pioneered ever farther in search of the prized sperm whales, first around Cape Horn to the Galapagos, Hawaii, and eventually to Alaska. There they encountered Inupiaq hunters in open boats harpooning smaller bowhead whales, mostly to boil and eat for sustenance. The two hunting cultures communicated, cooperated, and intermarried around Barrow, Alaska between the Beaufort and Chukchi seas on the North Slope.

Today, Alaskan natives, having reclaimed the original name of “Utqiagvik,” are still allowed to cull some whales, and the descendants of Nantucket families such as Coffin, Leavitt, Cottle, Fischer, Jernigan, Pease, and Tilton still reside there.

Just as stories of the whale were critical to an early “meet and greet” between Nantucketers and Alaskans, so, too, were the parallel patterns discovered by subsequent generations in the 19th and 20th centuries. Resourcefulness and a can- do approach carried on in each place, from the Gold Rush in Alaska to offshore trading and onshore shellfishing in Nantucket.

The special environments prompted the flowering of creative arts. Fine writers like Herman Melville with Moby Dick and Jack London with Call of the Wild depicted the hardships and story-telling lifestyles of each place, and these traditions were carried on by worthies like Margaret Murie, James Michener, and John McPhee highlighting Alaska, and, currently, Nathaniel Philbrick’s Nantucket.

Alaska is moved by the heavens and Nantucket by the seas. Each place is experiencing climate change ramifications in ways as visible and extreme as almost anywhere in the world.

Like many coastal communities, “Nantaska” and its inhabitants are affected by the warming and rising seas triggering coastal erosion at an accelerating rate. In Nantucket, climate change was experienced most visibly in 2013 when
the island’s famed, 150-year-old Sankaty Lighthouse had to be moved 400 yards inland from the rapidly collapsing bluffs on the island’s northeastern headlands. The 500-ton lighthouse was kept intact as it was moved over temporary railroad tracks lubricated by whale oil.

In Alaska, some of the first signs of climate change were seen in animal behavior: polar bears having to swim farther to find seals to hunt on disappearing icecaps, walruses traveling greater distances to find isolated rocky beaches on which to haul out. Such wildlife changes have been harbingers of tilts in Alaska’s ecological balances. Along the exposed North Slope, small native villages are slowly succumbing to the sea. Shishmaref and Kivalina on Alaska’s Arctic Coast are the poster children for this as their native populations face relocation inland.

As Alaska’s ice caps and glaciers thaw and the sea rises, the amplification effect grows. Scientists explain this as “ice-albedo feedback loops,” highlighted by diminishing white ice to reflect the sun’s rays and more dark seas to absorb them.

This makes the air and the waters warmer still. The melting of permafrost and the escape of methane gas blooms into the atmosphere are happening apace.

Tourism is a critical and ever-growing ingredient for the Nantucket and Alaska economies. Day trippers or vacationers fill the ferries to Nantucket during the summer months, when the island population balloons from 17,000 to 45,000. Creating crowded streets, restaurants and beaches, but also the island’s real estate rain-maker, they are welcomed by many in a sighing, roll-your-eyes way.

In the vast areas of Alaska, the tourist effect is less obvious. The mammoth cruise ships that ply the inland seas from Juneau up to Anchorage and parades of RVs heading for Denali Park and beyond, are the most visible symbols of this.

In both places, the hospitality industry represents an ever-larger piece of the economic pie. It is far and away the top moneymaker in Nantucket, and second or third behind only oil and gas, and ahead of mining and fishing, in Alaska, according to the respective chambers of commerce.

So what’s to be done about it? One thought of this regular visitor to, and admirer of, each place is to double down on tourism by loudly promoting eco-tourism.

“Nantaska” has no Las Vegas appeal to the visitor. It’s not glitzy. Visitors come to experience the scene more than be entertained by it. They buy mementos reflecting what they see and which remind them how they felt about it. Both places could highlight their comparative “beautiful nature” advantage in a more disciplined and fulsome way. Both could nourish ecological, environmental, and educational tourism as their blueprint for the future.

Nantucket and Alaska first connected hunting whales some 230 years ago. Whaling was a bloody business, but it helped provide food, light, and lubrication—and so, like the buffalo, whales were overhunted to near extinction. Happily, needs have changed. In this time of climate change and environmental deterioration, what a worthy goal for “Nantaska” people to connect again, this time aiming for “best of breed” in green and eco-tourism. It could be the tantalizing, hard-to-reach, virtuous feedback loop.

This story was first published in the 2019 Island Journal.

CROCKER SNOW JR., a journalist from Ipswich, Mass., has long visited and observed Nantucket and Alaska through family, friends and as a matter of professional interest. His book Nantaska: the Minnow and the Whale: The Curious Parallel Lives of Nantucket and Alaska, with photography by Brian Adams, was published in June 2018. It is available at independent book stores in both places and via the author: crockersnowjr@earthlink.net. 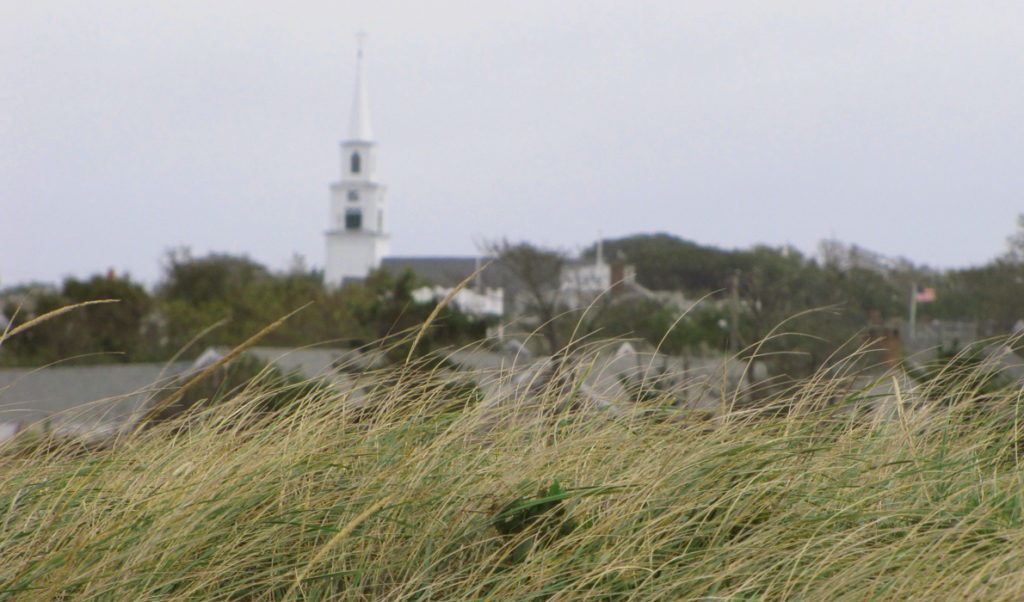 A view of Nantucket village from the shore.