A new type of ferry linking Winter Harbor and Bar Harbor that’s also a research platform was established by a woman of many roles.

Mullen is also something of a visionary in realizing that a ferry, running dependable routes at regular times, would also be ideal for baseline data collection for certain types of marine research.

Mullen is the executive director of the nonprofit Frenchman Bay Research Boating and captain of the ferry Katie Grace, a former Florida offshore charter fishing-turned-dive boat. Freshly rehabbed and painted a sunny yellow, the boat has been offering passenger service and carrying researchers since June between the College of the Atlantic dock in Bar Harbor and the new Schoodic Marine Center in Winter Harbor.

“You’ve picked a gorgeous day!” she exclaims while welcoming passengers aboard a recent 8 a.m. run. “Anything you need, just ask!”

Dressed in plaid shirt, jeans, and knee-high Muck boots, Mullen radiates good cheer, personal appeal and the vigor of an outdoor lifestyle. Now in her late 30s, you might mistake her for 20.

Mullen was born and raised in Virginia, where her mother’s people were crab fishermen. She loved that life, but she had a great passion as a singer/songwriter. In Nashville, Tenn., she earned a bachelor’s degree in music business and marketing, interned for Charlie Daniels and Kenny Rogers, and performed and recorded her own music.

So she earned a second bachelor’s degree in marine science—her second great passion—at the University of Maine. Then she earned an interdisciplinary PhD in ocean engineering while also working for and then running tour boats in Bar Harbor, performing field research and earning a 100-ton master’s license. After graduation, she shipped out around the world—off Africa, Peru, the Caribbean, and the United Kingdom—as a marine mammal observer, authorized to stop or reduce industrial activity, such as seismic oil exploration, that potentially impacts marine mammals.

As a profession, marine mammal observation is still somewhat young. And it mainly attracts women, or as Mullen calls them, “the whale girls.”

As an observer, she’s noted that researchers from poorer countries don’t necessarily have dedicated ships. Instead, they join ships run by private companies.

“They do a lot of opportunistic data collection,” she says.

Mullen saw the potential for ferries to offer that same opportunistic resource for research, while also providing their traditional lifeline service for Maine’s year-round communities, she says.

“You can collect really good baseline environmental data from a ferry,” she says. “It’s really expensive to maintain programs that collect good data over a long period of time. So if you marry those two things—the ferry for people who depend on it, and collection of data—it makes sense.”

With that idea in mind, Mullen did market research that found the Schoodic-MDI connection could leverage a growing commuter and tourist market while also assisting Maine’s marine scientists.

“Both communities,” Winter Harbor and Bar Harbor, as well as Acadia, “indicated this would be important for the growth of new opportunities in the area,” she says. Mullen and her husband, Jon Mullen, financed most of the boat purchase and business start-up themselves.

While the vessel is underway, Sarah Markwood, a Maine Maritime Academy student interested in marine science, is on the Katie Grace’s upper deck standing watch for seals, porpoises and perhaps the occasional whale, such as the minke that atypically ventured into the bay recently. Clipboard in hand, Markwood notes coordinates, animal behavior and approximate age and size. Mullen, at the helm, gets on the mic to showcase the animals to passengers.

The ferry also has water quality data collection, surface plankton net tows, and pelagic bird surveys on tap. Together, the surveys could help scientists and fishermen understand the effects of warming waters on marine populations.

Halfway across from Bar Harbor to Winter Harbor, Frenchman Bay opens up to the beckoning ocean vista. To some, that wide horizon might seem monotonous at best, intimidating at worst.

Quite the opposite for Mullen.

“I find the water endlessly fascinating,” she says. “If you’re really paying attention, it changes every day. Once you think you know it, it surprises you again.” 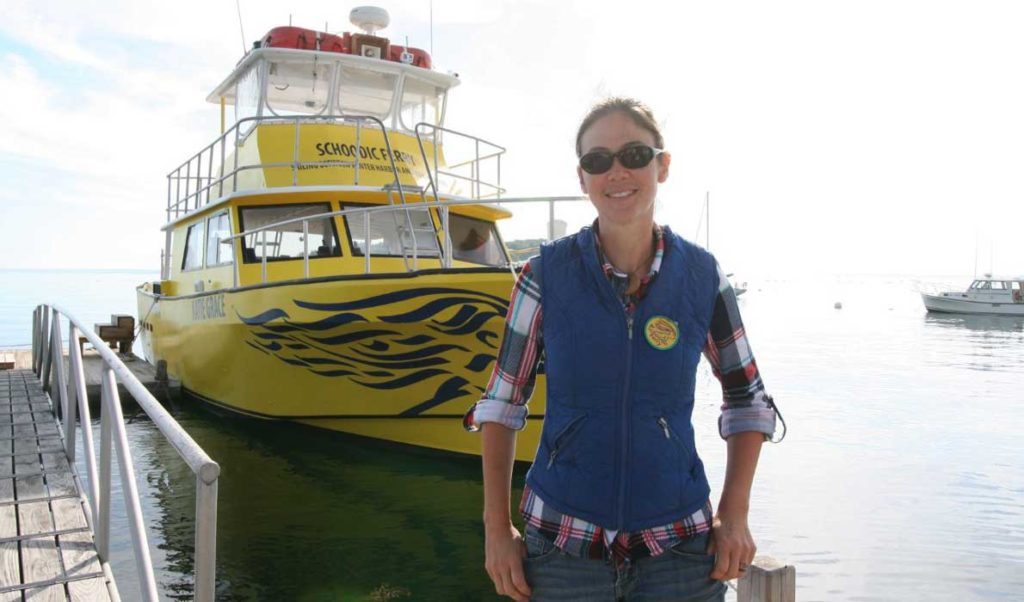 Kaitlyn Mullen at the College of the Atlantic dock.