Forty years ago I had a college roommate who amazed her friends by making English muffins from scratch. She baked them in a covered skillet sprinkled with cornmeal to keep them from sticking. She passed the recipe along to those of us who were interested.

A few years later, after I had moved to Little Cranberry Island, I started making them, myself. At the time, I lived in the little blue house, behind Hildegarde and Emerson Ham’s, with my friend Ann and her 4-year-old daughter Mae. Ann was another inspiration to my learning to bake bread. She taught me how to knead and form loaves, and gave me advice that I still pass on when teaching someone how to bake bread: “The bread is not the boss of you, you are the boss.” In other words, don’t let that unpredictable yeasty mass of dough get the better of you.

In the summer of 1978, Ann and I ran a small baking business in that little blue house. We took orders for cakes, muffins and pies, and baked bread and English muffins for stores on Islesford and in Northeast Harbor. At the time I did not know that I would marry Bruce Fernald, so I was not aware that I would be part of a family tradition connected to that particular neighborhood.

I have childhood memories of Hildegarde and Emerson baking doughnuts every morning in their store on the island, but I was too young to remember when Hildegarde’s mother, Sadie (Bruce’s great-grandmother), used to bake those doughnuts in her house, just a few yards away from the blue one. My memories of Sadie are of an elderly woman, with gnarled hands, who was still able to knit baby sweaters.

I accompanied my mother every summer to stop and pay a visit to Sadie. I recall my fascination at the fact that one of the lenses in her eyeglasses was completely frosted over and that she had no teeth. If I was told that she once was one of the best cooks on the island, it did not penetrate my 6-year-old mind.

As an adult, I heard several descriptions, of a younger Sadie opening the door of her house and calling out, “I’m fryin’!” on the days she made those delicious doughnuts. She was well known and respected for bringing amazing baked goods to the weekly grange meetings.

The little blue house behind Sadie’s has been owned by her great-grand-daughter Karen and Karen’s husband Hugh Smallwood for over 20 years. They have made major changes to the house, which is now much larger and painted a sunny yellow, but the kitchen still occupies its place in the original footprint. From the kitchen where I made my first loaves of bread, Karen has baked countless lemon cakes and chocolate cakes for the Islesford Dock Restaurant, hundreds and hundreds of blueberry pies and many beautiful wedding cakes for island brides.

Last year, Hugh Smallwood added a new baking component to the property. After taking a five-day workshop in June with Pat Manley on Hurricane Island, Hugh spent the rest of the summer building an outdoor, wood-fired oven for cooking pizza and bread. His plan was to make the oven hot enough for cooking pizza at night, and then make the oven available for any community members to bake bread the following morning when the temperature had cooled to 450 degrees.

By the end of summer there were two of us who took advantage of that opportunity after some pretty tasty pizzas had been served the night before. While Hugh was doing well figuring out the temperature curve for pizza, he had little interest in making much of his own bread. Still, he kept reading the book From the Wood Fired Oven by Richard Miscovich to look at recipes and get inspiration. When he read that the more serious bakers gave names to their lovingly built ovens, he asked Karen for a suggestion. Her response was immediate.

This year, Hugh has added bread to his pizza repertoire. Once a week, Karen posts on the Cranberry Isles Facebook page that Hugh will be baking bread, and people respond with their orders until the orders reach about two dozen. Hugh’s current recipe comes from the Miscovich book. He adds his own twist to the French bread recipe by incorporating garlic and rosemary, or cheese and caramelized onions to some of the loaves. Hugh donates the proceeds from his bread sales to support work on the parsonage next door.

His bread is delicious. Once a week he rises at 4 a.m. to shape and bake the loaves. When they are cool he bags them in paper and brands them with a self-designed label that represents a neighborhood tradition and the name of his oven. The sticker on each bag reads, “Fresh from Sadie.” 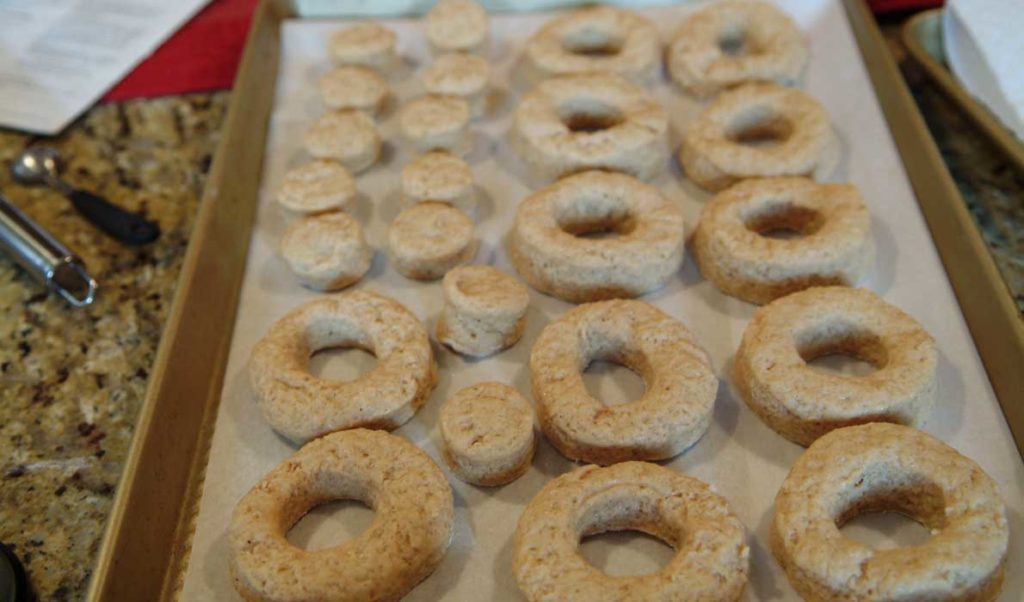