Elizabeth Strout has followed her last novel, My Name is Lucy Barton, with a new book that continues the story. Anything is Possible isn’t only about Lucy and her family, but includes characters we were introduced to previously, and hometown Amgash, Illinois, with its fields of corn and soybeans.

We meet some new characters and discover their connections. Something else unites them beyond their few degrees of separation: tragedy infuses their lives. As if holding X-rays to light to see what we otherwise can’t, Strout focuses not only on their pain but a sense of why, of what underlies the visible damage. Strout has Lucy Barton’s cousin Abel describe it this way: “What puzzled Abel about life was how much one forgot but then lived with anyway—like phantom limbs, he supposed.”

In another book, this subject matter could be a lurid, gossipy recounting of personal troubles, but instead gets treated matter-of-factly, with compassion, as Strout exposes the dark side of adult experience: marital deceptions, voyeurism, status and wealth substituting for emotional capital, and trauma related to war or childhood.

There are a few examples of some success and happiness, hard-earned and savored, as tenuous and short-lived as they may be.

We catch Lucy Barton at her peak as a writer, seeing her in this book on an author’s tour as her memoir is released in paperback. More than a financial success, the book seems to provide empathy. Patty Nicely, a character Strout introduced previously, has found support in Lucy’s story, saying about it now, “It made me feel better, it made me feel much less alone.” Lines of Lucy’s we would have read ourselves are repeated here by Patty, emphasized for the meaning she takes from them, like “we love imperfectly… but it’s OK.”

Compromises—for example, understanding that love can be imperfect—are the way I think Strout suggests we can move forward in our lives with any kind of hope at all. At its most cynical, this book considers what we substitute for happiness, what we settle for to avoid conscious awareness of pain.

With Charlie Macauley as the narrator, Strout provides his “hit-thumb theory” to explain coping with pain—or rather, the challenge to it.

“On his grandfather’s roof as a child one summer, hammering tiles down hard, he’d discovered that if you hammered your thumb by mistake, there was a split second when you thought: Hey, this isn’t so bad, considering how hard I was hit… And then—after that moment of false, bewildered, and grateful relief—came the crash and crush of real pain.”

Those heightened moments, so eloquently and tersely described as “crash and crush,” spare no one in this book. Even Lucy, having gained confidence and recognition for her “voice,” suffers a panic attack when re-immersed in childhood memories during a visit with her siblings in Illinois. We can wonder: was writing, for her, the provision of grateful relief, a temporary distraction from the crush of pain?

One could read this book without having read My Name is Lucy Barton, but to read them in sequence exponentially increases the meaning, and pleasure, of both. Not, I should say, pleasure from prying into people we could dismissively call “screwed up,” but people just like us and those we know, living imperfect lives and hoping for some grateful relief.

Anything is Possible has a wonderfully ambiguous title and provides fodder for pondering its meaning. While applicable in describing the range of human experience, it is also an optimistic expression of hope for the future. The character Lila Lane, daughter of Lucy Barton’s sister (who was supposed to have been named for her) and a high school student with Patty Nicely as her guidance counselor, marks the next generation. She gets support from Patty, after initial scorn. Patty will help her, a smart but angry kid, go off to college. This book doesn’t say education is the best way out in escaping a miserable childhood, but it suggests a source of hope, creating different choices in one’s future.

A story by Strout might, in the future, be hers.

Tina Cohen lives in Massachusetts where she works as a therapist, and summers on Vinalhaven. 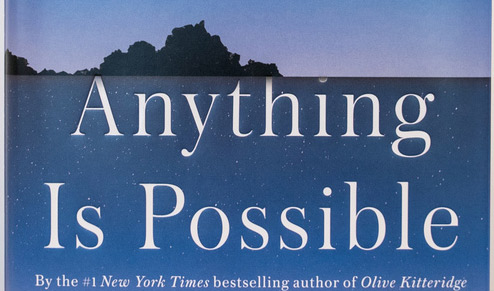