In the Great Green Room

The Brilliant and Bold Life of Margaret Wise Brown

Different things draw us into writing projects. Sometimes it’s a great story or a narrative that instructs or informs in some unique or unusual way. Sometimes it’s a new look at an old topic. And every once in a while, it’s simple connections—seemingly unrelated events that combine to make a tale worth telling.

In the fall of 1993, as we were beginning to assemble the 1994 edition of Island Journal, a very polite gentleman with a significant name—James S. “Pebble” Rockefeller Jr.—stopped by my office at the Island Institute to describe a story he wanted to do for us.

Jim—I don’t recall reaching a first-name basis with him and we certainly didn’t get to Pebble—was by then well known in the Midcoast as a boatbuilder and as the driving force behind the Owls Head Transportation Museum. But the story he brought us was far more personal: his 1952 romance with Margaret Wise Brown, the author of numerous children’s books including Good Night Moon.

Along with the story came a set of photographs Rockefeller had taken at “The Only House,” the Vinalhaven camp the two had shared during their brief and intense time together in 1952. I recall talking the writing project over with him, looking at the pictures, and agreeing to give it a try. A few days later the story arrived and we weren’t disappointed.

“A Writer of Songs and Nonsense,” accompanied by four images Peter Ralston chose from a larger number, ran in the 1994 Journal and was re-published in Holding Ground, a best-of compilation of Journal stories we published in 2004.

I’ve always thought it was one of the best Journal pieces we ran during my years editing that publication, largely because it was so unexpected: who knew that a world-class author who had re-invented children’s literature had spent time at a camp on Vinalhaven? Who knew she’d done so in the company of a man with such an illustrious name? Who knew he was such a good writer and photographer? Sad to say, I don’t think we ever convinced him to write another story for us.

My meeting with “Pebble” Rockefeller would be just a nice memory, however, if it weren’t for another chance encounter a couple of months ago in the Falmouth library, where I spotted an audiobooks copy of In the Great Green Room, Amy Gary’s new biography of Margaret Wise Brown. Listening in the car, the first thing I encountered was a foreword by none other than Jim Rockefeller, again describing his magical romance with Margaret, whom he had met at Cumberland Island in Georgia, and who had been 15 years older than he was at the time.

Margaret Wise Brown herself is an iconic figure. Beginning in the 1930s she brought an entirely new perspective—that of the young reader or listener—to the writing and publishing of books for children. Good Night Moon—just one example among many—focusing as it does on everyday objects in a child’s bedroom, is calming, reassuring, a perfect bedtime story for the very young. I read it to my kids in the 1970s; everyone did.

Margaret’s romance with Rockefeller wasn’t the only part of her life connected with Maine islands. Earlier, she had a longtime relationship with Bill Gaston, who also had Vinalhaven associations, and The Little Island, another Brown bestseller, is derived from her time in the area.

In the Great Green Room deals with a great many other aspects of Margaret Wise Brown’s life: tumultuous relationships of all kinds including a lengthy and difficult affair with a female actress and poet named Michael Strange. Margaret never married, and her life ended tragically 1952, when she died in France, reportedly as the result of a blood clot. Her ashes were spread at “The Only House” on Vinalhaven, where there is a small monument to her.

In the Great Green Room is based partly on a trove of correspondence and other papers that spent many years in a trunk in a Vermont barn. Biographer Amy Gary learned of this cache 20 years ago and has made very productive use of them.

David D. Platt is former editor of Island Journal and The Working Waterfront. 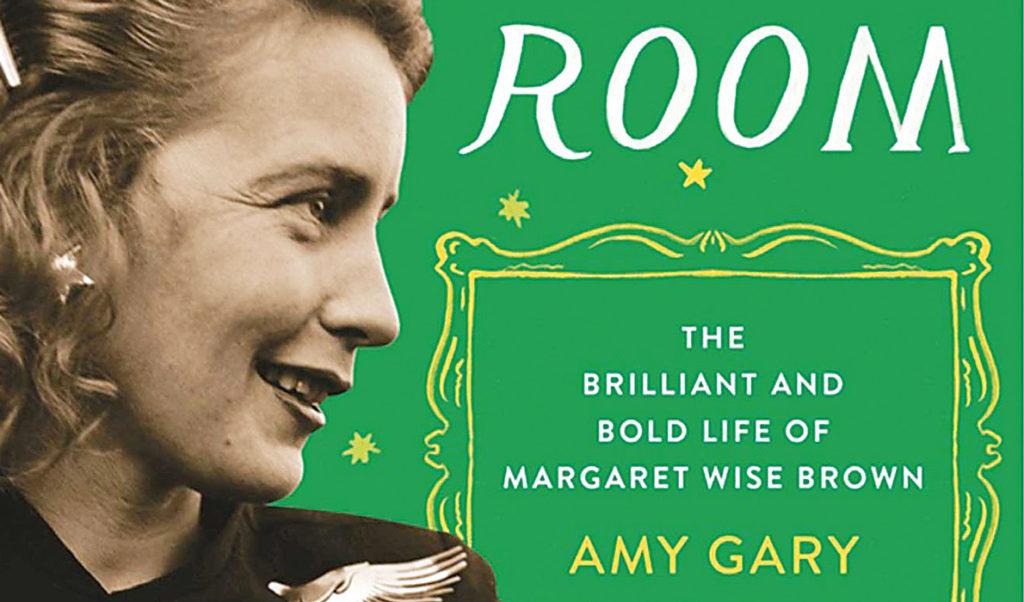