Residents are studying how best to safeguard the water from sea level rise. They also are grappling with how to ensure that seasonal overuse of the water supply doesn’t deplete the freshwater aquifer, which could also allow salt water to infiltrate.

The combination of the potential threats to the water supply have created a sense of urgency, says Andrew Dalrymple, president of the island water company.

“The fact is, our antiquated pump system puts more pressure on us to find an alternative than does the protected sea level rise scenarios, as failure of the pumps could happen much sooner than one to two feet of sea level rise,” he noted in an email interview.

Monhegan’s main freshwater aquifer is an open meadow not far from shore. While many Maine island communities are assessing their ability to withstand sea level rise, the geographic position of the aquifer makes its vulnerability apparent, said Peter Slovinsky, a marine geologist with Maine Geological Survey.

“You have this basically open-water meadow aquifer that’s only several feet above sea level that’s in a mapped flood zone,” Slovinksy said.

While he has been discussing climate change threats with Maine coastal communities for over a decade, recently, there has been increased willingness among those communities to adapt to the threat. He credits efforts of the Island Institute and other organizations to provide education, funding, and technical capacity to island communities. As a result, several island communities have begun projects to confront sea level rise.

The Monhegan Water Company is receiving just over $100,000 in 2019 and 2020 for a two-phase project to assess how best to safeguard the island’s freshwater drinking supply.

The first phase will assess the current state of the meadow aquifer and the threat of storm surge and sea level rise, as well as the adequacy of a breakwater which protects the main harbor. The second phase will assess potential sites for drilling future bedrock wells into a subterranean aquifer; this second aquifer may prove able to provide a supplement of or a replacement to the main aquifer.

Island residents are acutely aware of the need to conserve natural resources, Dalrymple said. Well before this project began, Monhegan residents have been proactive in educating seasonal residents about the need to conserve water. Not every islander agrees about the severity of the threat of sea level rise from climate change, but the task of assessing the threat of sea level rise has gotten strong support, he said.

“Everyone perceives the value of having more information to base decisions on,” he said.

The final assessment of the current state of the water supply is due by the end of the year. The same firm compiling that report recently began collecting data on the island to assess the viability of drilling bedrock wells. The gulf between determining what to do to make the island’s water supply more secure and actually doing it will be measured in funding, said Dalrymple.

“If funds were available that could be used to pay for construction and development, it may be possible to have some new well points drilled in the spring, which would be good because the logistics of getting a well-drilling rig on Monhegan is a huge hurdle and could actually take years to finally convince a driller to make the trip,” he said. 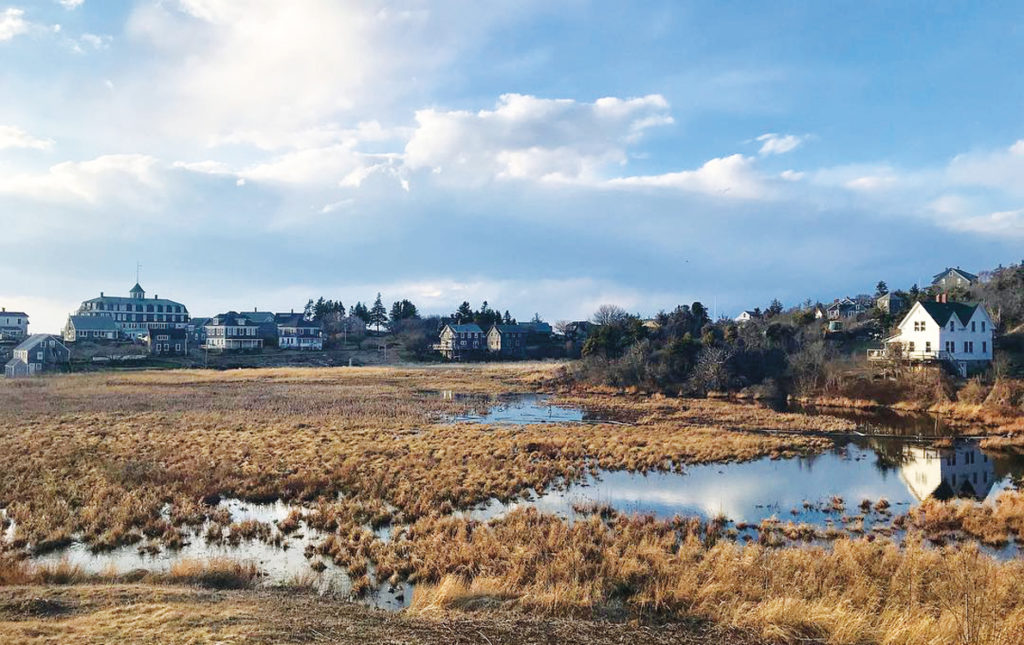 Monhegan Island’s marshy freshwater meadow is part of the aquifer.