Two years ago, with his wife Mandy landing the job as the teacher in Monhegan’s one-room school, they became year-round island residents.

But in moving to the island, Dylan faced leaving behind the creative and professional life he’d carved out as a member of several bands and operator of a record company.

He and Mandy were living in Biddeford and Portland, and working on several musical projects. Since 1999, Metrano has played guitar and sung in a band, Tiger Saw (check out videos at TigerSaw.com; the band’s 2015 release Horn Hill was recorded on Monhegan). Before that, there was a seven-year stint, right out of high school, with his band Hamlet Idiot. In 2010, he and a friend launched Burst & Bloom Records, which just released a sampler featuring tracks from 50 full-length records.

With so many endeavors that meant so much travel, how would he continue pursuing his passions on an island that’s a 75-minute boat ride from the mainland?

“It was definitely daunting,” Metrano confessed in a late August interview. “Everything we do has to be really well planned.”

The mail-order nature of the record company continues on the island, which underscores the need for its tiny post office, he notes. Unlike mainland life, though, if he needs envelopes or other packaging material, “I can’t run to Staples.”

But Metrano has embraced his new island life.

“I had been on the road a lot before that, touring,” he said, and the more settled island life was appealing. But as he kept track of his musician friends’ travels, “Part of me felt I was missing out. So, I decided to invite a few of them out.”

And Metrano’s many musical friends have created a cultural cornerstone to the island’s life, at least during the warm-weather months, when the year-round population of 35-50 can swell to 1,000, who wander the dirt roads and hike the rocky trails.

He used the island church as the first venue for one of his shows, then when he began managing The Barnacle (which is owned by the Island Inn), he began inviting musician friends to perform there for audiences of about 40.
“There’s no shortage of musicians out there. It’s mostly people I know,” he said.

“It’s definitely a curated program,” he said, and he works “to keep it fresh and keep it great.”

The week earlier, it was a musician from New York; most of the others have been from the New England region. On the Sunday following our conversation, Metrano would open for Chris Staples, a musician on a national tour who hails from Washington state.

The appeals for touring musicians are the opportunities to visit a Maine island, eat good food, play to an intimate and attentive audience, and hang out with the Metranos.

He also keeps entertainment rolling at The Barnacle with non-musical events, including evenings devoted to trivia, life-drawing, scavenger hunts, knitting, games, and bingo.

Metrano is quick to point out that Monhegan isn’t a cultural desert. In addition to its 100-plus-year-old art history, there have been live music and other cultural events. There has been a jamboree—sort of an open mic—at the island church every other Tuesday for years, and Metrano didn’t want to compete or interfere with that tradition.

“In August, it seems like something’s happening every day,” he said.

The entertainment—cultural offerings, really—the Metranos produce also include poetry readings and films. A documentary called Contemporary Color, featuring an event staged by musician David Byrne in Brooklyn, N.Y., was screened recently and Metrano brought one of the film’s producers, Josh Penn, to the island to answer questions and talk about the project.

Dylan and Mandy have taken over the Art Monhegan website and publish maps identifying island galleries.

“I just love putting on shows. In some ways, it seems more special out here,” he said. Islanders and visitors seem to agree.

“People stop me on the street sometimes and tell me they appreciate what we’re doing.” 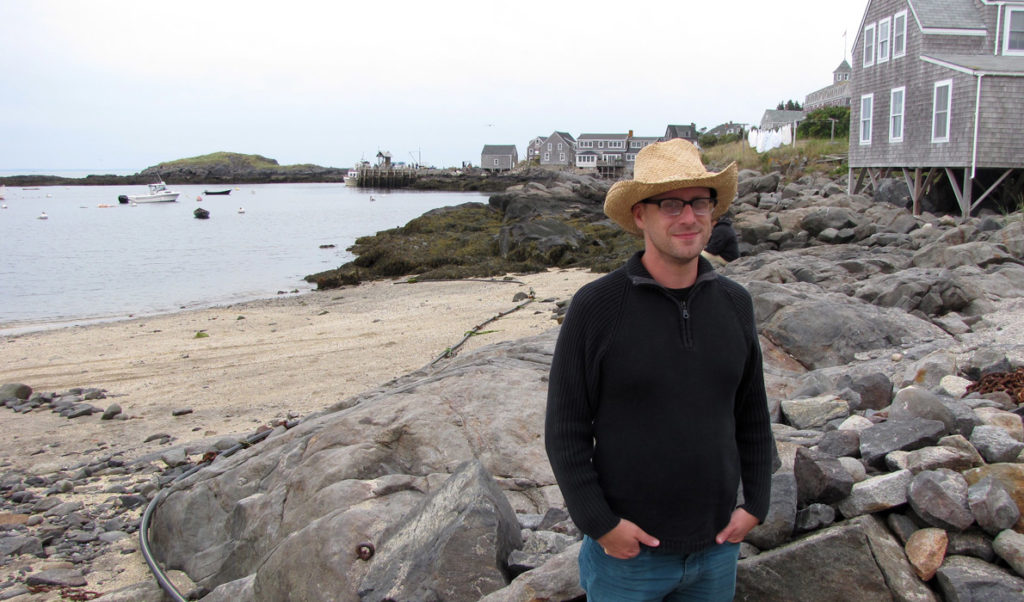