What an intriguing deadline for the Cranberry Report—the day before the presidential election! Even on a little island the political ads have been constant and inescapable. I will be glad to have a break from it, but then again, what a fascinating time in history.

When I got my absentee ballot, I paused for a few minutes just to look at it, to take in the legendary significance of having a woman as a major party candidate for the first time, ever. Less than 100 years after the 19th amendment was ratified, women finally had the chance to vote for another woman to run the country. Regardless of who you voted for, this opportunity was huge. It made me stop and appreciate the strong women who came before me.

My mother was one of those strong ones. The fact that she was born with cerebral palsy was not a handicap to her. A challenge, maybe, but one she embodied with intellect, style and grace. She told me once that she never felt sorry for herself, because she really had no knowledge of what life would be like living in a body that had the physical abilities she lacked. When she was in second grade she was encouraged to use a typewriter in school so she wouldn’t be held back by the challenges of handwriting.

I am amazed and grateful for the forward thinking of her parents, who moved from Rochester to Fredonia, N.Y. in the early 1930s so Mom could attend an elementary school that was affiliated with a teacher’s college. Had they stayed in Rochester, where children with physical and/or mental handicaps were institutionalized for “school,” I would not be here.

Mom could and did enjoy life like everyone else. She just needed time to think things through and find her own way to achieve the same results as others. Mom’s way was usually how we did things. Her family nickname was “the Cruise Director.” She earned it and was good at it, even though I allowed it to grate on me for most of my life.

She was an excellent driver, having fought harder than the rest of us for the right to take a driver’s test. Mom figured out that it saved time and gas and was safer to plan out all of her errands using right hand turns, avoiding left hand turns as much as possible. Over 50 years later, UPS would make this a policy for its drivers. She was way ahead of her time on many things.

As the buyer and manager of a hospital gift shop in the 1960s, she was expected to keep the cigarette vending machine stocked. She felt it was an ethically wrong to make cigarettes available to doctors who were telling their patients to quit smoking. Much to the dismay of the hospital board, she petitioned to have the machines removed. She had to fight to get her way, but eventually she did.

She was an avid skier, going without poles so they wouldn’t trip her up, a technique later used in teaching children to ski. She also had shorter skis that were easier to maneuver, years before they would become a popular commercial option.

I learned a lot from my mother, but some of the most lasting lessons came when she was not “directing the cruise.” When I wanted to bake chocolate chip cookies for the first time, Mom said, “Here’s the bag, the directions are on the back.” She was nearby in the kitchen, as I put all of the ingredients into one bowl, neglecting to read the part about creaming the butter and sugar first. The cookies were a disappointing mess. Mom didn’t criticize or say anything more than, “Oh, maybe you forgot to follow all of the directions.” A life lesson learned in one shot.

My mother’s love of unusual jewelry, much of it influenced by the Arts and Crafts tradition, probably had the most profound impact on my life. I always had access to her jewelry drawers, and from a young age she let me borrow pins to wear to school, trusting me to still have them firmly attached when I returned home.

In our house, craft activity was encouraged. Trips to the craft store took precedence over buying toys. It’s no surprise I eventually found my way to jewelry design.

Thank you, Mom, for teaching me about cashmere, for your amazing sense of color and design, for your incredible ability to laugh at and lighten awkward moments, for taking us to hockey games, for the endless grammar drills that taught us when to use “me” and when to use “I,” and for making sure I never used the word “irregardless” because it isn’t a word.

My mother has been gone for almost three years, and it has taken most of that time to really miss her and truly appreciate her strength. I don’t think we are all destined to be the strong ones, but I am so grateful for the ones who have been and the ones who will be and that my mother was one of them. She would have loved voting in this election. 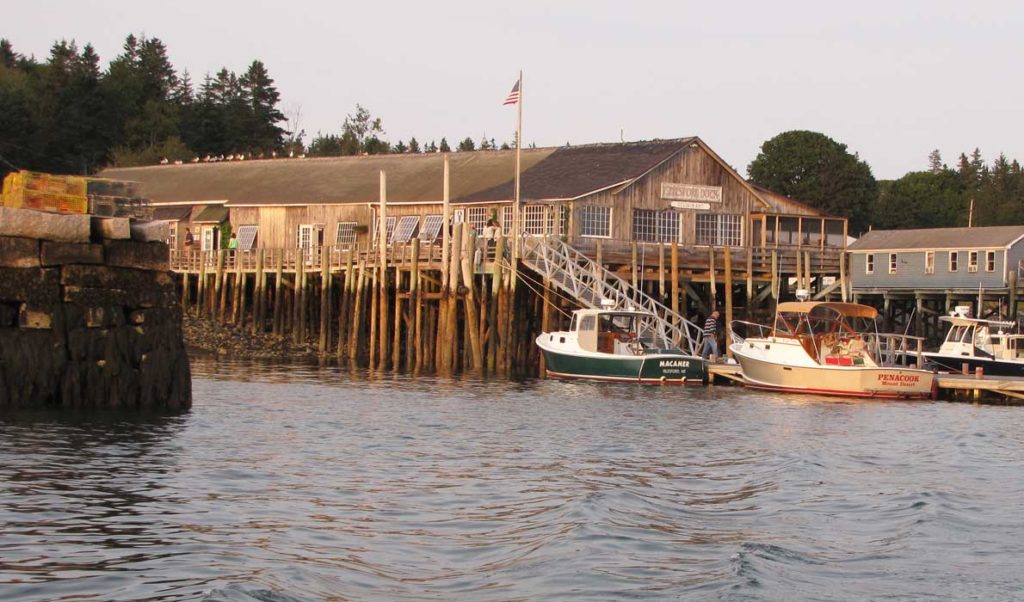 Islesford from the water.