In the summer of 1977 John Willey returned home to Maine with his wife, Barbara, who had never been that far east. His last permanent address had been San Francisco, where he’d been a private detective. He’d worked as a reporter, a novelist, and a cabinetmaker. At the age of 44, he was still seeking—as some religious people intransitively refer to the peripatetic trek many of us stumble through in pursuit of a meaningful life.

Willey had a knack for making things out of wood, so he spent the next winter and spring on one-off furniture-building projects and traveling in wider and wider arcs from his mother’s home in central Maine in search of permanent employment. Eventually he found himself in an office in South Bristol where the only available job was welding, which he’d never done before.

But the proprietor liked John’s photos of his woodworking projects and suggested he explore farther down the line at the Paul E. Luke Boatyard in Boothbay Harbor, where they often needed people who could do finish work. One disconcerting interview with Paul Luke later, he was an apprentice boat builder. It was the launching point of one of the most difficult, exasperating and rewarding years in his life. A Winter Apprentice tells the story—and unfolds the philosophy—behind it.

The book’s main narrative turns on daily life in the shop, which comes through vividly in descriptions of the boatyard, the insides of the boats and the processes of building them, from coamings, bungs, and backsaws to stays, spars, and lofting.

But driving the engaging profluence of the story is John’s relationship with the bosses, Paul, the owner, and Earl, the foreman, who are the master builders and, more importantly, the teachers. John’s first few weeks are rough because finish work on a yacht is a lot different from cabinetmaking. Earl and Paul—wholly true to Downeast characters that anyone who’s lived in blue-collar Maine has encountered—are taciturn, brusque, attentive, and intent on the quality of their work.

They suppress their frustration with the apprentice’s fumbling mistakes. They bark. Their tempers flare. The apprentice’s anxiety is practically palpable. But so is his determination to swim or sink—learn the craft or get fired trying. He perseveres, and so do his teachers. A couple of months into the struggle, it starts to be clear that everybody is succeeding. Revelation.

A Winter Apprentice is more than an amusing recollection of a job in a boatyard. It’s a philosophical rumination on what it takes to learn well and to do high-quality work. Taking off the rough edges, smoothing them down, getting the measurements exact, making a fitting permanent into the stormy future aren’t just mechanical operations, but they’re also metaphors for the learning process itself—difficult, sometimes downright painful, but potentially lofty in outcome:

“Not much question but a suffering mind or two came to the Luke yard over its years of building, my own among them. But my impression is that we were looking for a launching toward, as much as release from. Release from a sameness increasingly deadly to mind and spirit, release to a larger knowledge, a wider perspective, a better understanding, somehow set in these aluminum whales filled with curious space, with wire and wood, with nerve and skill and spirit, we hoped, and work, workmanship, and maybe even wisdom. … some of my heat surely comes from the time I arrived at the yard, unsure, a little scared by all these professionals, who, you can be sure, were there chiefly to build and to learn to build, like myself. All I can tell you about the rest of what they came for is this: Building good things lifts the spirit, even if you happen to find glue drooling on you from a job overhead.”

The outcome is grace—in gorgeous sailing vessels and, ultimately, in this well-crafted book. A Winter Apprentice is a memoir of skillfully drawn characters, illuminating daily details of a coastal industry, and that perennial sense of humor that characterizes all good writing and lives well-lived.

John Willey lives in Waterville, and is also the author of Observed from a Skin Boat, a collection of poems.

Dana Wilde lives in Troy, Maine, and writes the Backyard Naturalist and Off Radar columns for the centralmaine.com newspapers. His recent book is Summer to Fall: Notes and Numina in the Maine Woods, available from North Country Press. 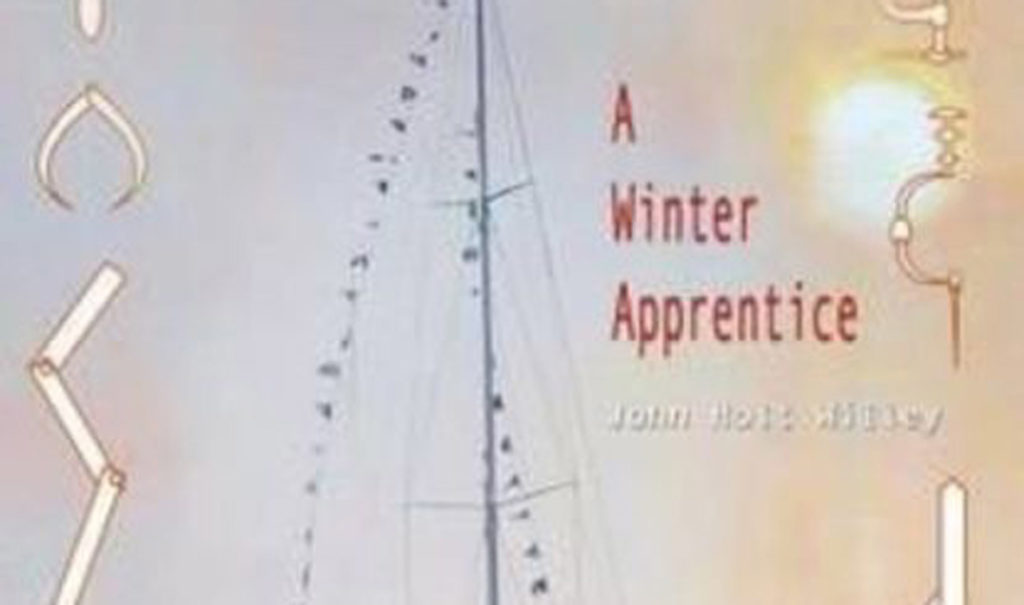