Living on any of Maine’s 15 inhabited islands means making compromises. One of the most serious of those compromises is living with limited medical care.

Emergency medical services, in particular, are available in varying degrees, depending on the island in question.

Some islands, such as Monhegan, rely solely on good Samaritans who are trained in first aid to help out in an emergency. On the other end of the spectrum, Vinalhaven, Maine’s largest year-round island community, offers a fully accredited emergency medical service, complete with several EMTs, nurses and two ambulances.

Regardless of the level of service available, there are a few things that all island EMS programs have in common.

Perhaps the most important facet of maintaining an island EMS program, at any level, is training. Eva Murray is Matinicus Island’s only licensed emergency medical technician. In fact, she is the sole trained medical provider on the island year round.

“We do the best we can,” she said. “The majority of calls are not typical EMS calls. They’re non-emergency calls, or people who want advice. True emergencies are few and far between.”

Still, Murray travels to the mainland as often as she can for medical training. Maine EMS requires licensed EMTs to renew their licenses every three years, she explained, with a significant number of training hours required for renewal. Murray attends an annual five-day training event at the Samoset Resort in Rockland and often finds wilderness training events as well.

Medical providers on Vinalhaven had a valuable opportunity in July, training in situ with high-tech medical simulation mannequins. Dr. Stuart Damon, medical director of Islands Community Medical Services, brought the mannequins to to the island. Damon is also an instructor at the University of New England, and works closely with UNE’s simulation lab where the mannequins reside.

“The simulation was like a gift,” said Pat Lundholm, director of the Vinalhaven Ambulance Department. “On a million levels it was good training.”

Lundholm extolled the simulation’s value, saying it comes closer to reality than typical training scenarios. During normal on-island training, at least one person in the crew must create a simulation scenario for the rest to carry out, and therefore, at least one person has prior knowledge of what will need to happen.

Using the UNE mannequins meant participants were able to simulate scenarios for the Vinalhaven crew without their prior knowledge, closer to a true emergency. The mannequins are even able to simulate different breathing sounds depending on their symptoms, further creating a more life-like training situation.

“[EMS] is like a dance,” said Lundholm. “You only do that gracefully when you practice it.”

Regardless of the island, emergency calls tend to rise during the months of June, July and August.

Jess Stevens, deputy director of Emergency Management on Monhegan, estimates the island’s population swells from 40-60 people in the winter to up to 1,000 people in the summer, including around 200 day-trippers each day. Consequently, emergency calls on Monhegan rise from one or fewer per month in the off-season to 12 or more per month during tourist season.

“It’s a big switch,” said Stevens. “The people in the know about where things are for emergencies are a very small group.”

Typical emergency calls are for sprained ankles, cuts and dehydration, all maladies that can largely be attributed to outdoor activities such as hiking, Stevens said.

Likewise, Lundholm attributes Vinalhaven’s rise in volume of emergency calls during the summer to the season’s outdoor activities.

“People like to think the volume goes up because the number of people goes up,” she said. “We see more trauma calls in summer because people go out and play more. They’re riding bikes, out in the woods, boating.”

In fact, according to Lundholm, even during the summer months, most of the calls are from local residents.

Every island community does its best to keep residents and visitors safe and healthy. Often that means medical providers, regardless of certification, go above and beyond the normal call of duty. However, islanders appear to have figured out what works for their communities.

“I’ve seen many years of this situation,” said Stevens of the emergency program on Monhegan. “It’s working pretty well.” Likewise, Lundholm feels the emergency care on Vinalhaven is “fantastic for a place 12-and-a-half miles out to sea.”  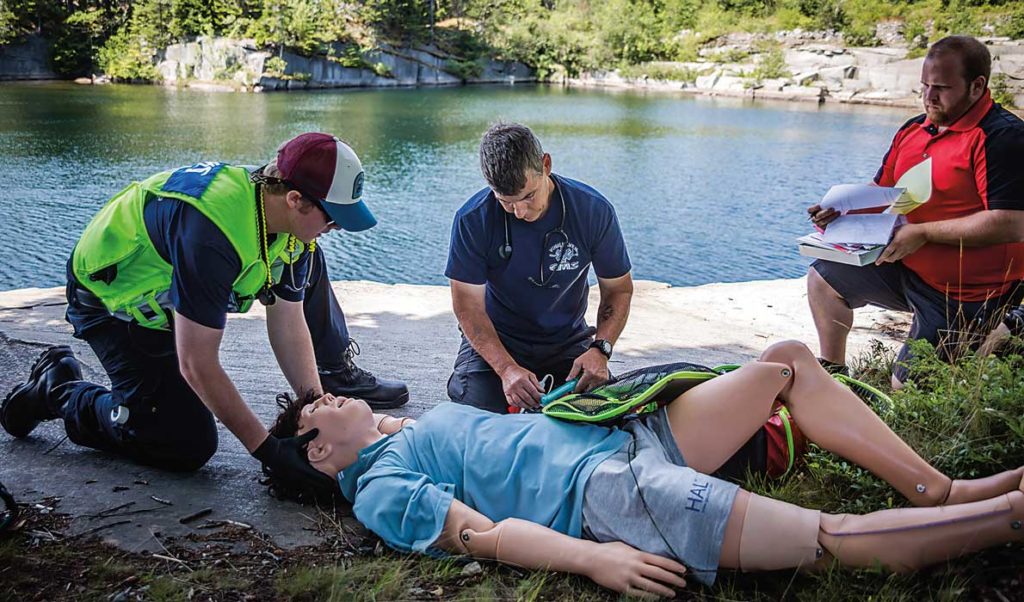 Emergency response volunteers practice with a mannequin on Vinalhaven.