On an overcast February day, with the help of contractors donating their services, Island Housing Trust had a small house trucked a couple of miles along wooded roads from one Somesville neighborhood to another.

Given the narrow rural roads, the effort took the better part of a day, as the truck carrying the house moved in stately procession. The small home had been privately donated to IHT, on condition that it be occupied by a year-round resident employed on MDI, and was being moved to a parcel of land donated by the town of Mount Desert, which encompasses Somesville and other villages.

With a private individual, the town, and various businesses donating to the project, it was a narrative of community collaboration in response to the affordable housing shortage on MDI. That’s particularly the case for people who work on MDI but have difficulty finding affordable year-round housing in light of high purchase prices and lack of availability due to summer-resident ownership and the conversion of many homes for the profitable weekly rental market in this popular tourist area.

The trends have made things more difficult over the years. By 2014, more than 60 percent of MDI’s workers were commuting to the island because they couldn’t find affordable housing there, according to John Dorrer, a workforce development consultant in Brunswick, as cited in IHT’s 2016 newsletter.

Affordable housing, as defined by the U.S. Department of Housing and Urban Development, is housing that costs 30 percent or less of a family’s income. An estimated 12 million renters and homeowner households now pay more than 50 percent of their annual incomes for housing, and a family with one full-time worker earning the minimum wage cannot afford the local fair-market rent for a two-bedroom apartment anywhere in the United States, according to HUD.

The need for affordable housing for purchase and rent has grown on MDI, said IHT Executive Director Alison Beane. Since 2008, the nonprofit, which works to create affordable housing, had completed 34 homeownership projects for 106 adults and children as of January 2017. “Affordable” on MDI is considered to be under $250,000, said Beane.

Currently, IHT has approximately 25 would-be homeowners on its waiting list, some as long as several years.

“A lot more houses have become weekly rentals. That’s impacted MDI a lot,” Beane said. “A lot of homes that would have been in the affordable price range are now being used for weekly rentals and are vacant the rest of the year.”

That has ripple effects.

“I’ve heard from employers that folks don’t come here to work because they can’t find housing that suits their need,” she said. “The biggest employers all struggle with it,” like MDI Hospital and Jackson Laboratory, as well as College of the Atlantic, which needs affordable options for students as well as faculty and other employees.

Duane Bartlett, at the Mount Desert Island and Ellsworth Housing Authorities, sees the same situation; many who work on MDI can’t afford to live there. The agency provides 42 family units and 205 elderly or disabled units on MDI, available based on income eligibility guidelines. It also provides a housing choice voucher program throughout Hancock County, with 350 subsidized units. Most voucher holders, Bartlett said, rent off MDI due to the high asking price for apartments there, a situation exacerbated by the prevalence of weekly rentals.

In Mount Desert, it’s hard to find a home to buy for much under $400,000, said Town Manager Durlin Lunt.

“Some realtors have decent rentals at prices people can afford, but there’s just not enough of them,” Lunt said.

Depopulation in certain areas has increased the need to bring in new residents, and that can only happen if they can find affordable housing, said Lunt. The village of Northeast Harbor, for example, has dropped from close to 1,000 to about 350 in the past few decades, Lunt said: “We can use more people in those areas. If we can add affordable housing anywhere in the town of Mount Desert, it’s a positive thing for the town.”

Ideally, he added, the community would like to attract young families with children to attend the local elementary school, which is seeing declining kindergarten entry.

“The community is aging,” Lunt said. “We need to get younger people. Younger people not only contribute to having children in the school, but they can contribute to community civic activities, like becoming firefighters—all those things that make a community vibrant. It’s a problem that’s 20 or 30 years in the making.”

Kendra Michaud is a new IHT homeowner who’s delighted that she and her child have become part of the MDI revitalization effort. Trained in physics and astronomy, employed by the Smithsonian Astrophysical Observatory in Cambridge, Mass., for a number of years, then earning a master’s degree in science teaching, she moved to MDI in 2014 to become a science teacher at Mount Desert Island High School. But she found it tough to find affordable housing.

The first couple of years, she rented in Northeast Harbor but wanted something permanent. She had learned about IHT before arriving on MDI and kept her ear to the ground, knowing she wanted to stay in Mount Desert since her child was enrolled in the elementary school there.

“I knew that people who work on the island often buy a house off the island because it can be more affordable,” she said.

Finally, an IHT house opened up in IHT’s Beech Hill development, which currently has nine houses—and a great feel, she said.

“We’re a small community here,” she said. “Our kids often play together and they can go to each other’s houses. We often have shared meals, especially when it’s warmer. So it’s definitely a nice neighborhood.”

There’s plenty of work still to be done, as evidenced by the establishment, in 2017, of Mount Desert 365, a nonprofit formed to develop affordable workforce housing, among its initiatives.

“There’s a great need on the whole island for affordable housing,” said Kathleen Miller, the organization’s executive director. “We know there are many people who work on the island who would like to live here and reduce their commute on and off the island, but are not able to find places they can afford to purchase.”

With work underway to complete the installation of the Somesville house, IHT’s Beane expects the application period soon to open, with the house tentatively expected to be priced by IHT’s board at no more than $185,000. Would-be homeowners must agree to certain conditions, including agreeing to live there year-round and abiding by IHT’s affordability convenants. Applicants can earn no more than 160 percent of area median household income: For 2017, that’s $102,400 for a family of four or fewer.

“That sounds like a lot of money,” said Beane, “but when you look at the cost of houses here, it’s not.” 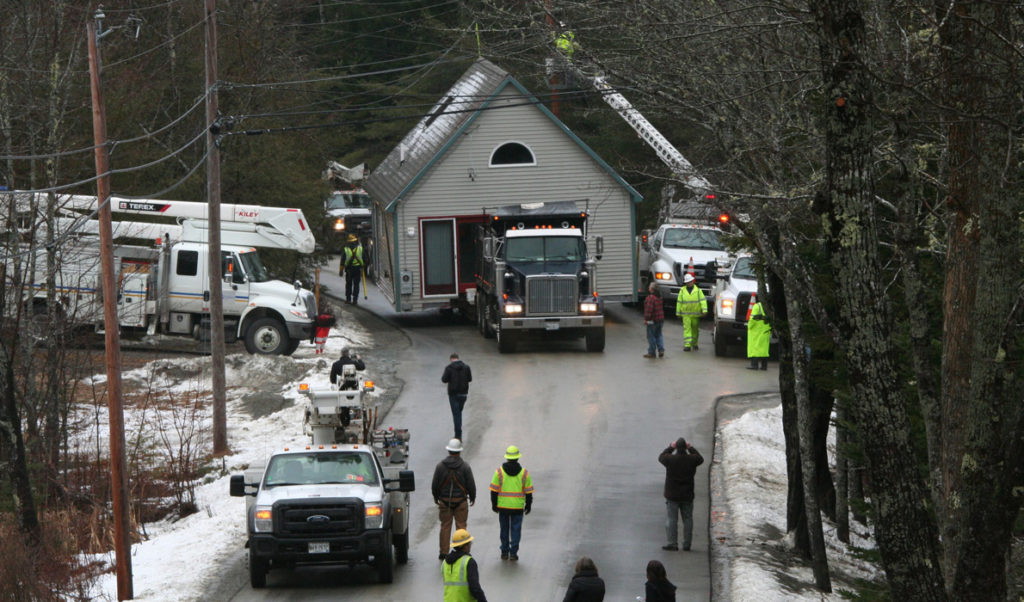 A house donated to Island Housing Trust is moved to a new property in Somesville to provide affordable housing.