Waterfronts and those coastal towns that bustle with visitors in the summer tend to go quiet after the new year dawns. But that doesn’t mean decisions affecting those waterfronts and towns aren’t being made. In banks, in local and state government meeting rooms, and around conference tables at nonprofits, things are happening.

The effort to boost one of coastal Maine’s most important exports took a big step forward in mid-December. The Maine Lobster Marketing Collaborative board agreed to hire what is described as a global marketing firm, Weber Shandwick, to lead a “public relations, advertising, digital and social media campaign designed to increase demand for Maine lobster,” the Mount Desert Islander reported.

“There’s a lot of art and science to marketing,” said Matt Jacobson, the collaborative’s CEO. “Weber Shandwick has the kind of data miners that can really help us focus our attention on those people that are likely to buy lobster,” he told the Islander.

Speaking of marketing, tourism remains the state’s top economic sector (second to health care spending), and coastal communities are keenly aware that fresh approaches are needed to bring visitors back and attract new ones. The Castine Patriot reports that a “French-built replica of the 18th century battleship Hermionewill visit Castine” on July 14. The original Hermione visited Castine more than 200 years ago during the U.S. war of independence.

The Patriot notes that the Maine Tourism Board has awarded a $10,000 grant to boost visitation for the event, which will include crafts, music, dance and storytelling. The paper also notes the long-time French connection to Castine, which was named for the French military leader Jean-Vincent d’Abbadie de Saint-Castin.

More on old boats: The Ernestina-Morrissey, a 156-foot long schooner, made its way to Maine at the end of the year, arriving at Boothbay Harbor Shipyard for repairs estimated to cost $6 million. The Massachusetts Department of Conservation and Recreation is footing the bill for the work.

The Boothbay Register reports the schooner, first launched in 1894, has not been in sailing condition for ten years. According to a Massachusetts official, the Ernestina-Morrissey is the official tall ship of that state and the last tall ship to ferry immigrants to the U.S., carrying immigrants from Cape Verde in the 1980s.

In Portland, signs of an improving economy are seen in the hotels and condosbeing built, but according to one landowner and would-be developer, zoning is holding back more growth. The Portland Phoenix reports that Michael Cardente of Anderson Street Realty, owner of “a vast gravel lot at 122 Anderson St.,” is unable to do more with the property than lease it as a staging area for trucks servicing the Nova Scotia ferry.

“The largest stumbling block has been the zoning,” Cardente told the newspaper. “That whole zone—the uses really don’t apply to what’s happening in the area,” he said, referring to the breweries and coffee roasters popping up in the neighborhood.

The Lincoln County town of Bristol had a waterfront mystery on its hands. TheBoothbay Register reported that the town harbor committee didn’t know what to do about the fishing vessel Columbia, which has been moored in Pemaquid Harbor for over a year.

The vessel’s owner had a deal to use someone’s mooring, but the agreement fell apart, and efforts to get the owner to move the boat failed. At one point, the paper reported, the vessel drifted, doing damage to a mooring. Harbor committee members and the harbormaster had been working with the Coast Guard and state agencies to get the vessel out of the harbor, but to no avail.

Here’s a bit of very local history, a subject that weekly newspapers explore well. The Stonington Island Ad-Vantages printed a letter posted Dec. 30, 1914, from a Deer Isle resident to a friend in Weymouth, Mass.

Lottie Haskell’s letter to her friend Sadie included reference to weather (“so cold and disagreeable”), her livestock (“My pullets are laying fine. I can’t get the prices you can for your eggs, but I have been getting 45 cents a dozen,” and “my cow is only giving milk enough for my own use”), and the rural winter scene (“It has been good sleighing here but there came a rain yesterday” and “John and Lester have been cutting wood up at Mr. Lowe’s… I think they have about eight of the ten cords they are going to cut for me”).

A little more history: a member of the Boothbay Region Historical Society wrote a two-part column in the Boothbay Register on the origins of the town’s name. Early references called the area Winnegance, and later, settlers wanted Massachusetts (then the controlling authority) to grant it the name Townsend. But a town in the Bay State already had that name.

Speculation is that Boothbay came from a comment about the harbor as “snug as a booth,” but Rumsey is suspicious of that tale. Old Boothby, in Lincolnshire, England, may have been an inspiration, some have said.

But she finally leans toward the name being tied to Beath, an early settler.

“Twenty-five years ago, the island fishing community lost two of its own within a few short weeks,” begins a story in the Stonington Island Ad-Vantages. In response, theIsland Fishermen’s Wives Association formed, dedicated to “bring the safety and well-being of fishermen into the light.”

The idea for the organization, founding member Su Oliver told the paper, “first came out of discussions at a baby shower.”

The organization continues to promote safety, offering training sessions on such topics as CPR, but it also has expanded it work, now helping the island fire department, ambulance service, nursing home and heating assistance program. 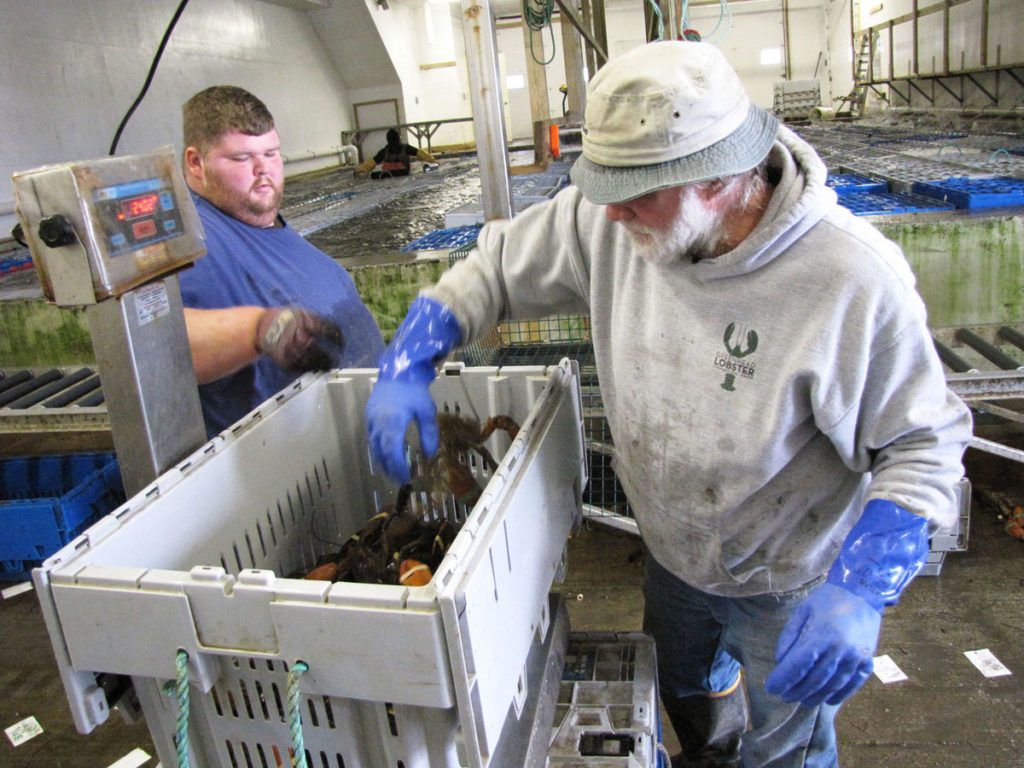