Forget the stoner stereotype: Paul McCarrier, 29, is serious, animated, maybe even intense as he talks about his work as the leading proponent of the effort to legalize the recreational use of marijuana, one of two proposals Maine voters will see on their state ballot in November 2016.

He’s not new to the world of weed: McCarrier was leglislative liaison and communications director for the Medical Marijuana Caregivers of Maine until he left that post to push for full legalization. He’s a registered lobbyist in Augusta, and when we sat down with him in Belfast City Hall, he was on his way to the State House for some final, end-of-session work.

Next year, Mainers are likely to see two ballot initiatives that would legalize the recreational use of marijuana. And you’re working for one of the initiatives, right? Tell me about that.

Our group is Legalize Maine, and we’re made up of political activists, social justice activists, people who are involved in the medical marijuana industry, ancillary businesses…

And you have been involved in the medical marijuana side of things. Can you talk about how you got involved in that and how it’s been for you?

So I was a third-year social work student at the University of Southern Maine, and I [began to see] college as just a way to suck money out of you, as opposed to trying to get you ready for real employment.

I had an opportunity to start growing medical marijuana, learning under somebody in Knox County. This was in 2010, when the medical marijuana law voted on in 2009 was just starting to come into effect.

During that time, the Legislature under Gov. Baldacci passed LD 1811 which stripped a lot of the intent out of the citizens initiative passed in 2009.

The implementation got rid of outdoor cultivation and created a mandatory patient registry and it also put additional restrictions on small cultivators and made it more difficult for patient access.

I worked with dozens of other people to craft a bill to bring the citizens initiatives back to its original intent. We managed to pass this bill; the governor signed the bill. After being involved in that, I kind of stayed, because I think the nature of government is it will abhor a vacuum and there wasn’t anyone representing the interests of marijuana caregivers or patients.

[Later], I saw that there was a national group coming in to push for regulating marijuana like liquor. So I started to explore, with people in the state involved in the history, what they thought about doing something homegrown, something completely different than the national model, what the large D.C.- and Wall Street-based groups are pushing.

What year was this—that you started drafting, or thinking about drafting—the local initiative?

I started thinking about drafting a local initiative in the latter part of 2013. The intent was to hopefully have the national group back ours because it was a local initiative. Unfortunately, we weren’t able to get there.

The reason we had to [draft our own] was, from my study of history, and politics in this state and out of this state, is that national interests will always trump local interests. And Maine’s marijuana industry is one the few growth industries in the state. It’s the best cash crop that we have.

With the trend being for marijuana to not only become a medicine, but now also to become a recreational substance, we need to make sure that Maine has an opportunity to benefit from that. Not only from the idea of social justice, where people will no longer face penalties for growing or consuming a plant, and remove the stigma of using it as a medicine, but also as an economic benefit.

And so you resigned from the Medical Marijuana Caregivers of Maine and you’ve become the face of this initiative. How far along have you gotten with signatures?

We’ve collected 20,000 signatures so far. We need 61,123. We have a goal of getting around 80,000 to make sure that we have a solid buffer for verification. Things are going really well. We have over 100 volunteers hitting the streets.

Your parents are in the health care field. Are they both nurses?

Tell me how they feel about whether marijuana is healthy. And I also wonder, when you have children, would you allow them to use marijuana? And how do you feel about the health aspect of it?

I can’t speak for my parents, but I think that they would agree that it’s something that is less harmful to your body than a lot of prescription medications and less harmful than a lot of recreational substances. I think when they look at the science of it, they have an attitude of a lot of nurses and people I’ve met who have a lot of direct care with the patient, that, “OK, we don’t have 50 peer-reviewed studies that show that it works this way for pain, but if someone says that this is helping with their pain, and it’s not harming anything else, why deny them?”

When I have a family, and my children [consider] using it, I don’t think I would encourage it, but that’s a bridge I’ll have to cross.

So you’ve been lobbying in the Legislature this last session. What have been some of the eye-openers you, as a young guy, have experienced?

Well, this is my fifth year doing lobbying. I started lobbying at the beginning of the LePage administration; I’m still there. It’s a very dysfunctional place because of the partisan divide and because of the strong personality in the executive branch and the way the governor believes the government should run.

In the Senate, there’s a faction of former law enforcement officers and extremely socially conservative Republicans who vote against anything that has marijuana in the name.

Is it still fun being over there?

It has its moments. It’s been nice to shift to the legalization of marijuana as opposed to just focusing on medical marijuana because it’s the end game. We’re not going to legalize marijuana twice; we’ll legalize it once, and tinker from there. A decision like this is too important to be left in the hands of people outside the state of Maine.

As a twenty-something young man, what things do you think Maine needs to be a place you can be happy living, in addition to legalizing marijuana?

I think it needs to change the way that the state does business with businesses. From my time at the State House, a lot of money, both for nonprofits and for businesses, tends to go to large, established businesses, or to people who are related to the power structure.

When we see bonds taken out, it’s not for small entrepreneurs. We’re not going to borrow $20 million to give 40 businesses half-a-million dollars of operating capital for two years, and hopefully grow and pay it back. We need to change that attitude.

People who grow up in rural Maine are natural entrepreneurs, and they just don’t have access to capital to have a shot.

When I talk to people about this initiative, what I’ve heard is that legalization of marijuana at least offers hope. It offers hope that if you want to grow very high quality marijuana, and you’re a good businessperson and you can make a wonderful product out of it, that you have a chance to get there.

And of course, the money would circulate locally, as well as the tax revenue, which is 8 percent?
It’s going to be taxed at a flat rate of 10 percent. That’s one of the concessions we made to make it more palatable to the general public.

But we can’t look at taxing marijuana as being the solution to any revenue problems. We already have a vibrant underground marijuana economy. If you tax it too high, that underground economy will continue to flourish, and that legal economy will lobby for enforcement, and we’re back in the war on drugs. 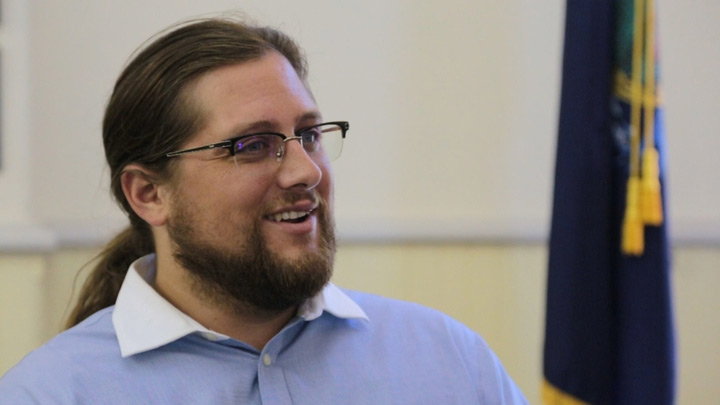