The process of harvesting sea salt isn’t all that complicated.

At Maine Sea Salt in Marshfield, the biggest piece of equipment is the sun. Eighteen years ago, Steve and Sharon Cook learned about all the different ways to evaporate water.

“And then we chose the most sound way to do it, which was solar,” Steve Cook says. “It’s the least expensive, and it’s an abundant energy.”

On a recent splendidly sunny day, 14,000 gallons of seawater were evaporating inside six plastic-covered hoop houses. Each is 15-feet wide and 200-feet long, and lined on the bottom with heavy black plastic. The water had been pumped several days earlier out of Bucks Harbor, in Machiasport, by the couple’s contracted tank-trucker.

Inside the houses, the water was several inches deep. It reduces by half, leaving on the bottom detritus such as sand. Then it’s pumped to another set of greenhouses to be filtered and reduced to 70 percent salinity. Finally, it’s pumped to finishing houses to completely evaporate, leaving behind stretches of salt that are piled up, placed in bins to further drain, hauled to the production area and ground in food processors, and layered between linen towels to remove any remaining moisture.

The Cooks offer tours of their set-up during the evaporation season, which runs from April through October.

Steve Cook opens the door to one of the finishing houses, where the temperature reaches up to 120 degrees. A blast of steam wafts out. The water is almost  completely evaporated, and white crystals line the floor.

“It’s still wet, but you can see it’s turning into salt,” he says.

The Cooks started the business on Bailey Island, where Steve Cook was raised. As a younger man, he worked at his father’s restaurant and lobster pound and held a variety of other jobs. He was between jobs when he and his wife started thinking about the big next thing.

“We said, ‘Well, let’s make something and sell it at a farmer’s market,’” he recalls. “We didn’t know what we were going to do. We discussed candles or jams, and I said, ‘No, everybody’s doing that.’ One day I was in a health food store and I saw all this sea salt from Spain and France. And I thought, ‘Gee, why can’t we make sea salt?’ So we got up and running.”

After reviewing evaporation processes such as boiling and reverse osmosis, all requiring pricey equipment and fuel, they settled on the greenhouse method. Their first setup was just as it is today, but on a smaller scale. They found the process was easy, takes advantage of an abundant resource, and naturally segues from an old idea.

“When you’re going to cook lobster, the fishermen always tell you, ‘Go down to the cove and get a couple of quarts of water and cook your lobsters in ocean water,’” he says. “When I was growing up, that’s what we did. So that’s where this concept came from. You can take this salt and put it with your tap water and you have your ocean water.”

At first, though, they met with skepticism. The first product was a single-ounce portion for cooking lobsters. The packaging was a hand-made envelope with directions on the back.

“I took it to all the area fish markets to sell,” Cook says. “They were totally against the idea. They said, ‘Nobody wants to buy salt to cook their lobsters in. They’ve got salt at home!’ But I say, ‘Hey, keep it for a couple of days and I’ll come back and pick it up if it doesn’t sell. So they agreed to that much. And it wasn’t long that they started calling me saying, ‘I want more of that.’ And it took off from that.”

About ten years ago, the couple moved the business to Marshfield, buying an old farm on a rural, winding road. It’s just a few steps from the back door of their home to a small building that contains the stockroom, processing room and showroom.

During a visit, the company’s two employees, Anna Hall and Stephanie Luce, were measuring salt with a scoop and pouring it into glass table-grinders, the kind more typically seen for whole peppercorns. Because it’s not finely ground and doesn’t contain anti-caking agents to make it free-flowing, the natural product is pleasantly coarse. So the grinders sell well. The salt also sells in gift jars and wide-mouth glass jars, and there are a variety of value-added products, such as smoked salt, herb salt and garlic salt.

The salt has a rich mineral taste that’s left intact because, unlike product elsewhere, this isn’t washed.

“By not washing it, you’re not changing the structure of the crystals or washing away some of the minerals that are in there,” Cook says. “The structure of the salt crystal is really complex, and it can change. It’s like a recipe. There are over 90 different trace minerals, all in trace amounts but adding up to about 8 percent of the salt. And they’re important. They add a lot of flavor.”

The first year, the Cooks produced about 500 pounds of salt. Today, they ship about 40,000 pounds throughout the U.S., primarily to health food stores, specialty food shops and high-end restaurants.

Now the Cooks are seeking to network with other sea salt harvesters in Maine, with the idea of folding them into Maine Sea Salt’s existing distribution network and expanding the brand. Harvesters are invited to contact the Cooks to discuss the idea (255-3310, steve@maineseasalt.com).

“There are quite a few salt producers in Maine,” Cook says. As probably the largest of them, he says, “We have the distributors, we’re established, and it just would make sense.” 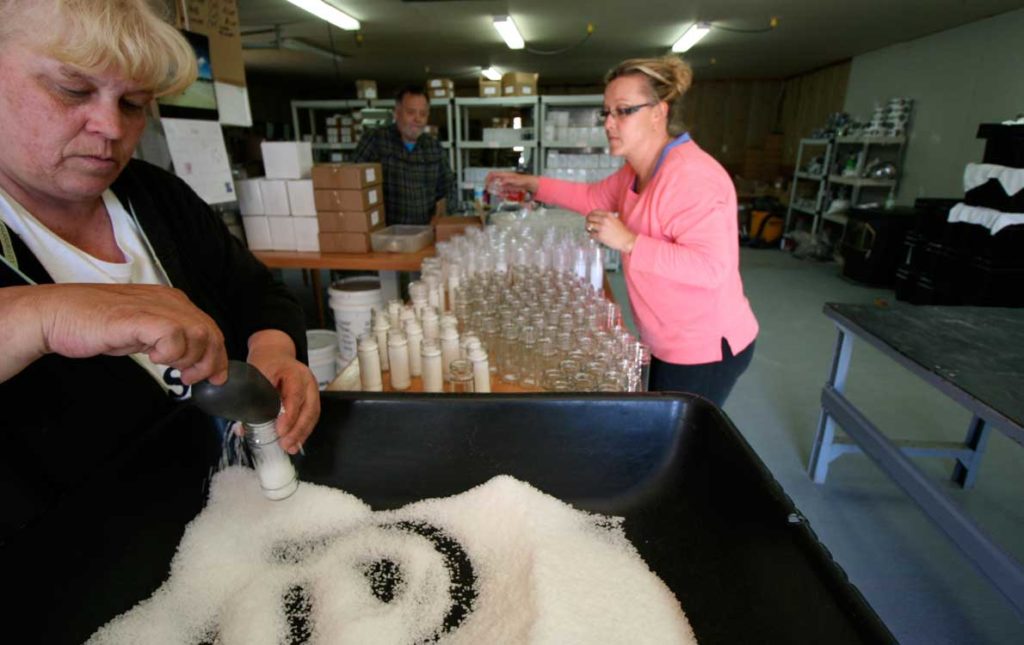