This summer I had dozens of conversations about the changing Gulf of Maine and how these changes play out in our local fisheries. Many conversations took place in community halls and theaters during evening “A Climate of Change” events featuring four short films produced by the Island Institute and panel discussions following the screenings.

In the end, talk kept coming back to how fisheries change over time and what our fisheries might look like in the future.

In one of films, which focused on how climate change was affecting the lobster fishery, Carl Wilson, now director of research for the Department of Marine Resources, stressed that if you add up the value of all other fishery species caught or grown in Maine at their historical peak levels, they don’t equal the current value of today’s lobster fishery.

This narrowing of our local fisheries has happened recently. Even 20 years ago we had a much more diverse suite of local species supporting our communities.

Lobster is the single good-news story, having more than tripled in volume, to over 120 million pounds.

In the films, lobstermen from Long Island in Casco Bay, Islesboro in Penobscot Bay and Islesford (Little Cranberry) off Mount Desert Island talk about their fishing careers.

Steve Train from Long Island recounts catching more product but making less money. The film, the first in the series, was made in 2013 and Train spoke of 2012, a year that brought focus on how climate change impacts lobsters.

In 2012 we experienced a record-breaking North Atlantic event. An area of unusually warm water stretched from the mid-Atlantic region to Greenland, with the warmest average ocean water temperatures ever recorded on average throughout the region.

The warm water changed lobsters’ seasonal behavior. They moved inshore early and shed early in the spring, instead of the more typical early summer. As a result, more lobsters were caught much earlier than usual.

The volume and timing created a dramatic drop in the price fishermen were paid for their product, and sent the industry into a tailspin for about eight weeks. For many, the profit from fishing disappeared, and some tied up their boats rather than incur the costs of fuel and bait. Families struggled to pay bills.

A fishery crisis of this magnitude, with a healthy population of the target species, is highly unusual, and drew global attention.

The fishing seasons in 2013, 2014 and 2015 have been better for lobster, but the trouble we had in 2012 motivated people to create a more resilient fishery. The Maine Lobster Marketing Collaborative was created with public and private investment to increase the value derived from each lobster. Entrepreneurs have invested in local processing facilities to handle higher volumes of product throughout the year. More and more fishermen started thinking and talking about climate change, and wondering what the future will hold for lobsters along our coast.

The best available science on that question comes in the form of regional “down-scaling” models that use global climate characteristics in combination with a more accurate local model grid. Using these tools, climate modelers at Princeton project that the bottom water temperatures will warm 4-7 degrees Fahrenheit over the next 50-60 years, which will make our waters similar to the conditions we find today south of Cape Cod.

This means we can expect our wild fisheries will be comprised of a different mix of species by the second half of this century. We will likely have fewer lobster after 2050, but it is possible that we could have bountiful local scallops, squid, butterfish, dogfish and even blue crabs, which have begun overwintering in some locations along the Maine coast.

Fishing in Maine in 60 years might look more like fishing out of Point Judith, R. I. or Cape May, N.J. In the meantime, we can expect more years like 2012, when unusually warm conditions will throw off our seasonal rhythm. We will all need to remain flexible and keep our options open to take advantage of the changing bounty the sea provides.

Dr. Heather Deese is vice president of research and strategy at the Island Institute. 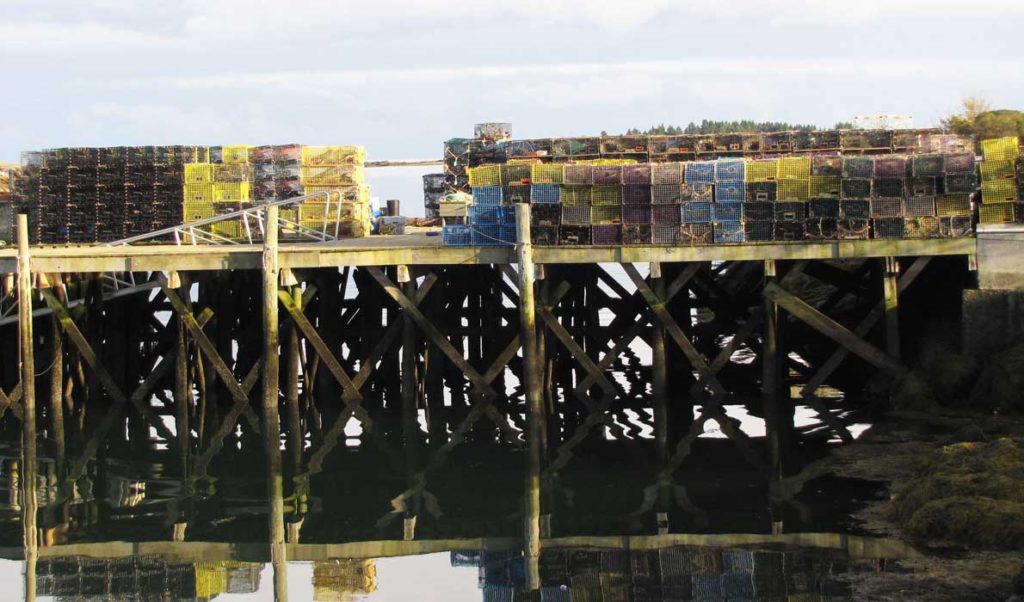 Lobster traps piled on a dock in Corea.