Editor’s note: This month’s Observer is a reprise of an earlier published column.

I’m not a bird watcher but I did notice, last week, an Eastern Phoebe light on a weatherstick outside my window. The stick was tiny and delicate but the Phoebe was even more so and the stick’s trajectory, thrusting upward (high pressure, clear day ahead) didn’t change when the half-ounce Phoebe lit on it.

Presently, some movement within caught the bird’s attention and it cocked its head and regarded the vague shapes it beheld beyond the glare of glass. Then, quite territorially, the little bird hopped along the branch till it was abreast the window, leaned boldly forward, composed its tiny features to express a scornful disdain, delivered a couple of decisive pecks to the glass and flitted away so quickly that had there been a corresponding blink on my part I’d have wondered where it went.

My friend Bob, not customarily a bird watcher either, was, on this particular day, unavoidably so. Driving up the North Haven Road, listening to the radio, thinking, no doubt, about family matters and traveling a moderate 25 or 30 mph in a big van with no real hood, he had just passed the Company Point Road on the right and was approaching the crest of Murch’s Hill.

As we who live here all know, there is a small turn around, a parking niche, there on the right. It’s in a bad place, the worst kind of blind spot, one that is at both a curve and the top of a hill. Often during hunting season as, again, we all know, one might find a hunter’s pickup tucked in this little space, a testament to the hunter’s optimism, that he might haul a multi-pointed trophy to the tagging station.

On this day the little space was again occupied, but not by a truck for just earlier a hunter, one less interested in show than in function, had butchered a deer on this spot and left the remains behind. Now a mature male Bald Eagle, whose sense of smell coupled with its timely appearance overhead had given it a heads up on the competition, was enjoying a few quiet moments with his meal.

Given its age and its load of loosely stowed tools, fasteners and material, my friend’s big Econoline van made remarkably little noise, so little that the eagle, normally the most astute and cautious of birds but on this occasion fully absorbed in its opportune repast, remained unaware of the van’s approach for just a few critical minutes more than would otherwise have been the case.

As the van rounded the corner the magnificent bird’s modest brain wrestled with the options before it and with the need to resolve things quickly. At 500 times the mass (even with an empty stomach) of my aforementioned Phoebe, an eagle picks, if it can, the moments to become airborne and the more leisurely of those is vastly preferable to those motivated by urgency. This raptor had, during the few previous and precious uninterrupted moments, gorged itself and the added weight of deer remains in its gut, still more remains stowed in its crop and a tasty entrail not quite deposited in either place, magnified the enormous effort required to get aloft under stressful conditions such as those in which he now struggled, leaving flight the least resourceful, but still the only, option.

The eagle took a couple of clumsy hops toward the open space afforded by the road, and flapping hard, climbed laboriously to about six feet, some 3,000 feet below its usual cruising altitude. With its wings fully extended to gain the maximum lift, he was occupying precisely the space where, an instant later, my friend’s van would be looking for accommodation.

Sure enough, moments later Bob found the eagle plastered across his windshield, its wings spread over the entire expanse of glass, the wing tips extending beyond and around either side of the van, as if in a caress.

Its enormous hooded face was precisely in the middle of the windshield and he glared fiercely in at Bob with an expression of disdain easily as withering as the Phoebe’s.

His heart having climbed to his throat and then having stopped beating, Bob’s brain, somewhat larger than the eagle’s, quickly determined the prudent thing to do during the few minutes of life remaining was to apply the brakes whereupon the eagle, having no real purchase, slid off.  Losing altitude quickly but uninjured, it got itself remarkably oriented before it hit the road, beat its huge wings and began a weighty ascent down the hill.

With each beat of its wings it glared derisively back at Bob over first one shoulder then the other as if to ask, “Where did you learn to drive?” 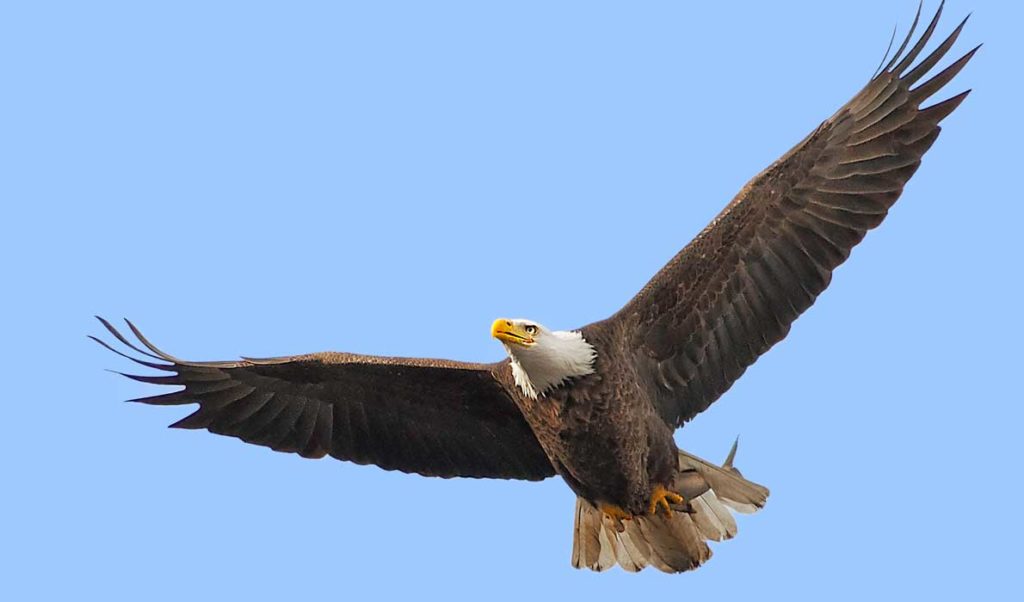