Scientists, who say these tidal wetlands are critical components of coastal environments, have been sounding the alarm for years.

At least one bird species, the saltmarsh sparrow, which dwells in salt marshes from Virginia to Maine, is already close to extinction as its habitat has been destroyed by development, invasive plants, and rising sea levels, according to research.

Rising sea levels, coastal development, invasive species, climate change, and runoff filled with nutrients from fertilizers, septic systems and farm waste are among the many threats to salt marshes. The Maine Geologic Survey projects that by the end of the century, global sea levels will rise between three and six feet, potentially destroying some of Maine’s most productive ecosystems and coastal infrastructure.

Maine Coast Heritage Trust is heavily involved in preservation and restoration of salt marsh lands, said Jeremy Gabrielson, a conservation and community planner with the organization. Maine could lose as much as two-thirds of its existing marshland, destroying the habitat for highly vulnerable species.

MCHT has developed a plan to protect and care for the state’s priority marshes, Gabrielson said. A major focus at present is protecting critical upland properties where current salt marshes can migrate.

“Larger marshes with undeveloped upland buffers are likely to be the most resilient to sea level rise,” he said. “Their protection is critical to sustaining Maine’s biodiversity and marine economy into the future.”

Three regions are of special interest, Gabrielson said. York County is where some of Maine’s largest salt marshes are located. Merrymeeting Bay, home to rare freshwater and tidal marshes, where the Kennebec and Androscoggin rivers meet, also is important. And Pleasant Bay, in Washington County between Addison and Harrington, is important because of its nationally significant shorebird feeding areas.

MCHT has begun approaching landowners in those areas to determine their interest in conserving upland properties through conservation easements; such deed restrictions would protect properties from incompatible development even after they are passed on to future landowners.

“We’re really looking to see where protecting land is likely to be the best strategy to support marsh migration,” Gabrielson said, citing a 2017 purchase of 90 acres of marsh and upland in Hancock. “Staff are working with landowners on projects up and down the coast.”

The organization also is working with landowners, towns, the Nature Conservancy, and other partners to restore marshlands by supporting statewide efforts to remove tidal barriers, he added.

“People have actively managed marshes in Maine for hundreds of years,” said Gabrielson. “Dams, ditches, and road crossings all change the way that water and sediments move through a marsh, which impacts their resilience to sea level rise.”

NOAA also has been involved in efforts to restore Maine’s salt marshes.

Marine habitat resource specialist Matthew Bernier said he’s optimistic NOAA will be able to support coastal ecosystem resiliency this year with federal funds “on a competitive basis to projects such as barrier removals and marsh restoration.” 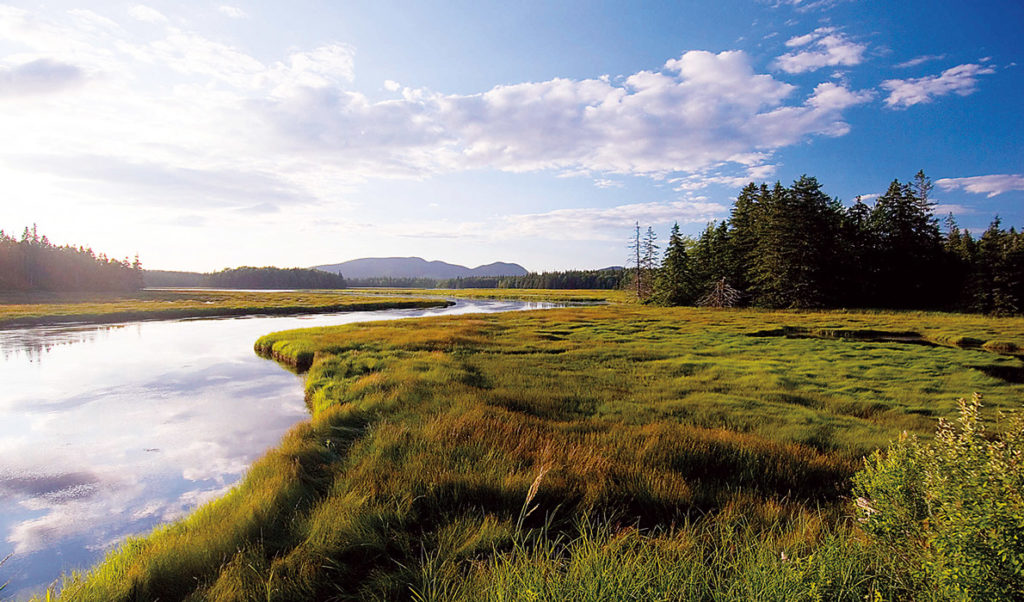 A saltwater marsh like this one help absorb storm surge and provide wildlife habitat.