Lynne and Christopher Gilbert of Bristol had long been interested in solar power. Unfortunately, a solar array wouldn’t have worked on their roof, since it’s not the best angle for the sun and there are many trees around it.

Last summer, they were at a meeting of the Midcoast Green Energy Cooperative, an informal group interested in such matters. They learned the Maine Public Utilities Commission had adopted a rule that allowed up to nine energy consumers to generate electricity using renewable technology on a single site that would be interconnected with the local utility, in this case Central Maine Power, then receive a credit back for electricity.

“There were several people at the meeting that night who were interested and over time, more chimed in,” said Lynne Gilbert.

It took a while to accomplish the project. But as of July 31, the Edgecomb Community Solar Farm is up and running, and it’s a model for what appears to be a wave of community farms now in the works.

This is the first member-owned solar farm in the state. The technology was installed by ReVision Energy of Liberty, which is seeing interest from other community groups.

“We have nine new community solar farms currently under development,” said ReVision solar advisor James Manzer, citing Freeport and Wiscasset as definites, with interest from folks in Wayne and Bar Harbor as well. “The Edgecomb solar farm led the way.”

Community solar farms are viewed as a great way to provide solar-generated electricity to homes and businesses that can’t support the technology on their own property. For example, some people might not own their own home, or the home is unsuitable for solar.

For the Edgecomb project, the group leased space from a couple, Judith Sandick and David Nutt, who are among the investors.

“They have a wonderful barn,” said Gilbert. “It just had a new 50-year roof put on. It was a perfect angle and there are no trees around it. We used the whole south side of the barn, and there’s a ground-mounted array also, because it wouldn’t all fit on the roof.”

In 2014, ReVision constructed a similar project in South Paris, but that one is a lease-to-own arrangement. Edgecomb is the state’s first solar farm owned at the outset by community members.

The community solar farm project was enabled by Maine’s virtual net metering laws that allow up to ten meters and nine members (one meter has to belong to the Community Solar Farm itself) to share ownership of a renewable energy project, with power generation shared among the investors on a percentage basis depending on the amount of investment each individual or business has made. Generation from the solar farm is sent to the grid and automatically credited to the accounts of the shareholders. The maximum amount of electricity that may be generated from a single community project is 660 kilowatts, which is about 2,500 panels.

ReVision views the 10-meter limit as arbitrary. “It seems that it got picked out of a hat,” said Manzer.

In Edgecomb, one meter is tied to the solar farm, leaving nine for member hook-ups. The farm consists of 182 panels of 255 watts each.

The Gilberts heat with electrically powered mini-split heat pumps, purchased with the help of a $500 rebate from Efficiency Maine. Their share of electricity will cover both their appliances and heat. Maine doesn’t offer reimbursement for solar energy, although members will receive a 30 percent federal tax credit on their investment.

Up to now, the Gilberts’ electric bill has ranged from $80 to $200 per month, summer to winter, a cost they don’t expect to incur for the rest of their lives. The payback on their share of the farm is expected to be 20-plus years.

The association had the help of Portland-based law firm Drummond & Drummond.

“It was occasionally slow-moving because our attorneys had to create our documentation from scratch, since we’re the first to do this,” said Gilbert. “They did an excellent job.”

The Edgecomb arrangement, with members owning the panels up front, is likely the wave of the future, said Manzer.

“They get to take advantage of the tax incentive, plus they pre-bought their electricity for 25 years by owning the panels,” said Manzer.

For the coming community farm projects, ReVision will likely move away from roof to ground arrays, due to questions that could arise around care of a structure for the life of an array, which is a minimum of 25 years and could be up to 40 years.

“It’s a really neat way for homeowners or businesses, who don’t have particularly good sites, to take advantage of solar,” said Manzer. 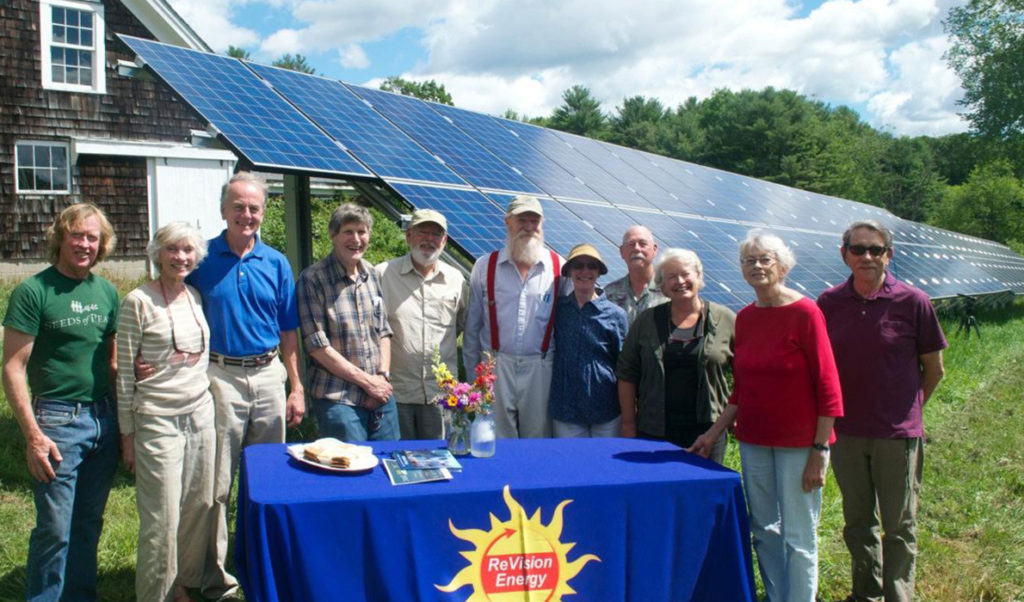 The members of the Edgecomb Community Solar Farm Association with their ground array. Another array is mounted on the barn behind them.