One of the most fertile markets for Maine-made products is flourishing nearly 7,000 miles away.

New prosperity and a growing middle class in China has created unprecedented demand for lobster and other Maine-made products. Local government and business leaders are working more aggressively than ever to market Maine products in Asia, and convince Asian investors to spend their capital here.

“It’s been really exciting to see how Maine’s industry has developed in China,” said Janine Bisaillon-Cary, president of the Maine International Trade Center (MITC). Bisaillon-Cary spoke at a breakfast forum sponsored by the Portland Press Herald at the Portland Public Library on Feb. 25. “There’s definitely a lot of interest.”

China is now Maine’s second-largest export market. Last year, Maine exported $208 million in goods to China, up by 13 percent over 2014.

While pulp and paper are still Maine’s top exports to China, shipments of seafood—particularly lobster—are driving that growth. Seafood exports to China hit nearly $20 million in 2015, up from $253,000 in 2010, according to the Maine International Trade Center.

A constellation of factors is fueling that growth. The Chinese economy is now benefiting from government policies launched in the late 1970s to encourage privatization, entrepreneurship and foreign investment, said panelist Suzanne Fox, a Portland-based consultant who advises businesses and schools in China and the United States on building ties.

Lobster is a luxury that many more people can afford and, coming from New England, it holds a special cachet because it is associated with fresh air, clean water and a well-regulated industry.

“As people have more money, they’re more tuned into that and they want healthy food that is fresh and pure,” Fox said. “Those things are just not guaranteed over there.”

Improvements in transportation have also helped open the market, said Bisaillon-Cary. Better direct service to Shanghai and Beijing has helped reduce mortality rates for live lobsters that are shipped there. As prices have risen for lobsters from New Zealand—traditionally the principal source of lobster to China—Maine lobster has become a more-affordable alternative.

What’s more, state and industry officials have stepped up efforts to stoke Asian appetites for Maine-made goods, and attract Asian investors to Maine. They have made multiple trade missions to Asia since 2012. In 2014, MITC opened an office in Shanghai to attract Chinese investment to Maine-based companies in the life sciences, advanced materials and manufacturing, and food industries.

On a trip to Tokyo and Shanghai last October, a delegation that included Gov. Paul LePage spoke to chefs, buyers, government officials and media about the Gulf of Maine’s ecosystem, and the fishing industry’s sustainable harvesting practices.

Annie Tselikis, executive director of the Maine Lobster Dealers Association, said the industry is already benefiting from heightened demand not just from China but also from South Korea, Vietnam and Japan. And because demand from Asia peaks during the winter—particularly around the Chinese New Year and Valentine’s Day—it helps buffer seasonal fluctuations.

“That’s sort of the beauty of that market,” she said. “There’s strong demand from Asia at a time when we’re not really consuming lobster in the U.S., and the quality is good for shipping. It really helps create a nice year-round portfolio for the lobster business.”

That has led to the creation of more jobs, she added. With more year-round demand, lobster dealers have had to build up their core year-round crews of managers, Tselikis said.

While the vast majority of sales are in live lobster, local seafood processors may also benefit going forward, said Bisaillon-Cary. China has improved its capacity to distribute frozen seafood—especially in inland communities. E-commerce has also become more popular with the growth of Alibaba.com, a China-based online retailer often likened to Amazon.com, she added.

Here in Maine, state officials are also working to attract more investors from Asia and other countries.

This fall, state officials plan to open a Regional Center to facilitate the EB-5 program, which expedites visas for foreign nationals who invest $500,000 or more and create at least ten jobs here.

Nearly $15 billion has been invested in the United States through the EB-5 program, but none of that has been in Maine, said John Endicott,  a commercial loan officer with the Finance Authority of Maine, who also spoke at the event.

“We hope to showcase investment opportunities within our state that EB-5 investors have previously overlooked,” Endicott said.

Anyone interested in learning more can contact Thomas Conley or Jeffrey Bennett at the Maine International Trade Center at 541-7400. 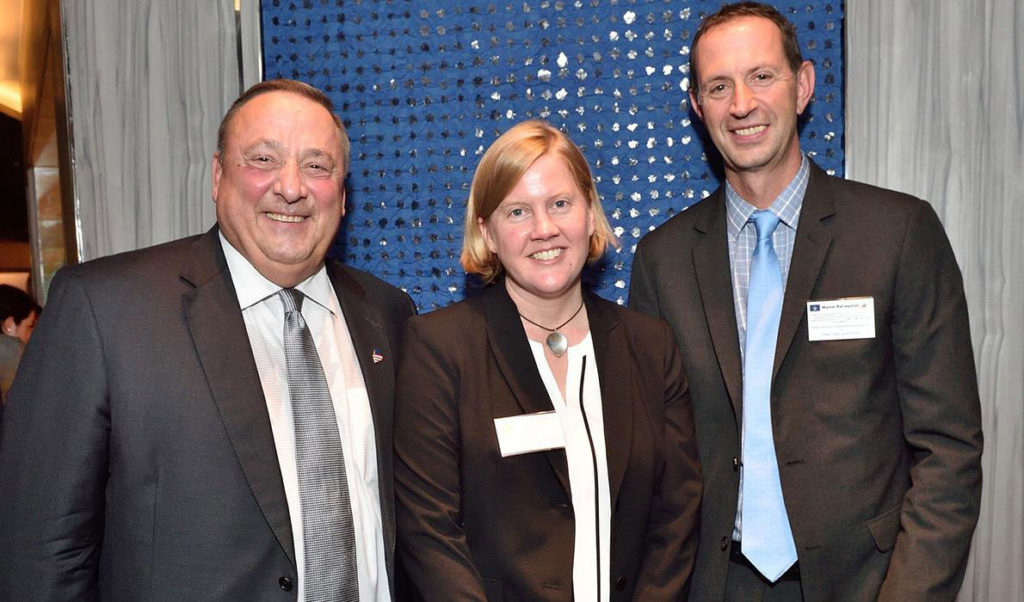