This is the second of our two-part trail map of historical moments and places on Maine’s journey to achieving statehood in 1820. This series covering 1700 to 1820 is just a smidgen of the history of Maine, which really begins about 13,000 years ago with the native Wabanakis.

Let our 10-location trail map be just the starting place to dive into the state’s fascinating stories and heritage. Many museums, historical societies, and of course, the state’s bicentennial committee had wonderful events planned for this bicentennial year, and while many of those have been cancelled or postponed, you can still access their resources. Check these out:

Maine Historic Preservation Commission’s “Present at Statehood,” an online exhibit featuring historic properties in Maine listed on the National Register of Historic Places that were in existence as of 1820: https://www.maine.gov/mhpc

1. Peterborough (Peterboro) Cemetery, Warren: As mentioned in the first part of this series, many former Revolutionary War soldiers moved to the District of Maine after the war to seek their livelihoods. Among those former soldiers was Amos Peters, born around 1737 in Plymouth, Mass. Of African and Wampanoag Indian ancestry, Peters enlisted in the Continental Army for the first time in 1776.

At some point during his service, he encountered General Henry Knox, who, after the war, gave, for reasons unknown today, 150 acres of land near South Pond in Warren to Peters, said Kate McMahon, whose master’s thesis at the University of Southern Maine was on the African-American community of Peterborough.

Peters married an African woman named Sarah, who had been kidnapped from her native Guinea and sold by a ship captain from Damariscotta to the McIntyre family of Warren. In 1784, while living as a slave to the McIntyre family, Sarah learned, through word of mouth, that a series of court cases in Boston which concluded in 1783 deemed slavery illegal in all of Massachusetts, including the District of Maine. For a dollar, she hired a local lawyer to help her gain her freedom.

Together, Amos and Sarah Peters and their extended family founded the community of Peterborough. They carved out what became an multiracial enclave that was integral to building the Midcoast’s physical infrastructure and its economy by owning and farming the land, working in the maritime trades as ship builders, seamen, and coopers, and helped build in the area, including Knox’s mansion, Montpelier, said McMahon, who currently works as a museum specialist at the Smithsonian Institution’s Center for the Study of Global Slavery that’s part of the National Museum of African American History and Culture.

The last of Peterborough’s residents left in the 1950s, but numerous descendants of Amos and Sarah Peters live in the region, and far beyond, today.

Visit: From Route 1, turn onto Sandy Shores Road. By the Sandy Shores RV Resort, take a slight left onto Bunker Hill Road. About a half mile down the road, you’ll see a sign for the cemetery on the left (across the street is a large rock with an American flag painted on it). Park the car on the road and walk the path to the cemetery.

2. Fort Edgecomb, Edgecomb: Through the first decade of the 1800s, not much headway was made to separate Maine from Massachusetts, partly because everyone was preoccupied with the effects of the Embargo Act of 1807, followed by the War of 1812.

Such actions were infuriating and something had to be done, so Congress passed the Embargo Act at the end of 1807, which made exports from the U.S. illegal.

It didn’t do squat to rein in the misbehavior of Britain and France. What it did do was crush the economy of Maine, which depended heavily on export trade with other countries. Mainers were not happy with this turn of events.

“People want to believe in their government and they want to toe the line, but if the kids are screaming from hunger how long can you keep that up?” said Joshua Smith, a maritime historian (who got his PhD at the University of Maine in Orono) and author of Borderland Smuggling: Patriots, Loyalists, and Illicit Trade in the Northeast, 1783-1820 and Blockhouse and Battery: A History of Fort Edgecomb.

Mainers began by protesting in a reasonable manner, first by logging legal petitions with the courts in Massachusetts, but soon enough, frustrated and desperate people were shouting in town meetings for secession and some resorted to outright defiance with violence and smuggling.

In order to curb the smuggling, the federal government erected so-called embargo forts at a number of locations along the coast, including at Edgecomb. The government told Mainers the forts were there to protect the coastal communities from British attack, Smith explained in an article he wrote on embargo forts for the scholarly publication, Maine History, but Mainers didn’t buy that explanation.

Fifteen months later, the Embargo Act was revoked. For many in Maine, however, the damage had been done, and they hardly had time to catch their breath before the country was plunged into war with Britain in 1812.

Visit: 66 Fort Road, Edgecomb. The octagonal fort on Davis Island is a state historic site subject to park admission fees. Go to the state’s Bureau of Parks and Lands website to get info about park visitation: https://www.maine.gov/dacf/parks/about/index.shtml

3. The Todd House, Eastport: While Mainers had largely been lukewarm on the idea of separating from Massachusetts, the War of 1812 flipped the switch for many people. That’s because Massachusetts treated the District of Maine very badly.

In the summer of 1814, the British captured the islands of Passamaquoddy Bay and communities such as Castine and Eastport. Leadership in Maine turned to Boston for support, but Boston balked.

Understandably, Mainers blew a gasket over this betrayal. With outrage at Boston at an all-time high, Maine leaders held a convention at the end of 1814 to discuss separating from Massachusetts, but then the war ended and convention membership backed off. However, the cause of separation had finally taken hold.

Visit: 1 Capen Ave., Eastport. Now a bed and breakfast, the Todd House, built around 1781, is thought to be the oldest home in Eastport and was occupied by British officers from 1814 to 1818, when Britain finally relinquished the seaport. Go to http://toddhousemaine.com for more information.

But, there was a pesky detail: Massachusetts required a 55.5 percent majority. The separationists did not have that majority, but that didn’t stop them. When they met in convention at the Congregational Meeting House (present-day First Parish Church) in Brunswick, some misbehavior occurred, including some creative math, to magically achieve the needed majority. Separation opponents and leadership in Boston, however, weren’t fooled, and once again, there would be no statehood for Maine.

5. The 1774 Inn, Phippsburg: After the 1816 debacle, William King and his cohorts regrouped. King lobbied leadership in Washington D.C. to get the Coasting Law (a sticking point for coastal communities) changed. When that happened in 1819, the separationists knew statehood was in the bag. On July 26 of that year, separation from Massachusetts passed by a margin of 10,000 votes.

The district’s petition for admission into the Union was submitted to Congress on Dec. 8, 1819. Expectations were that the bill would sail through. But no. Instead, Maine’s bid to become a state became entangled with the national debate on expanding slavery to new states joining the Union.

Debate in Congress was heated. A compromise was offered: admit Maine as a free state and Missouri as a slave state and prohibit slavery permanently in the unorganized territory of the Louisiana Purchase, north of latitude 36 degrees and 30 minutes.

Maine’s congressional delegation faced a quandary of epic proportions: vote against the expansion of slavery in Missouri and pass up Maine’s chance at becoming a state or vote for Maine’s statehood and allow the continuation of slavery.

Ultimately, the Missouri Compromise passed in Congress, but when it came to the final vote, five of Maine’s seven delegates voted against it. Maine became the Union’s 23rd state on March 15, 1820.

Visit: 44 Parker Head Road, Phippsburg. Mark Hill was one of the seven delegates to Congress that fateful year, and was one of the two who voted for the Missouri Compromise. His home in Phippsburg is now a bed and breakfast. Go to www.1774inn.com for more information. 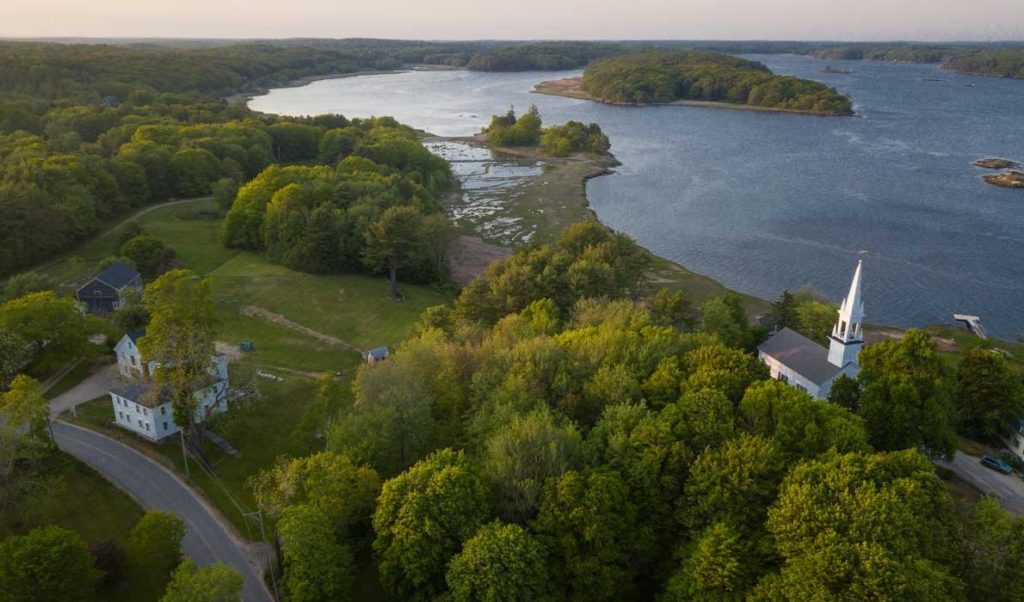 The 1174 Inn in Phippsburg is visible at left of image. PHOTO: MICHELE STAPLETON