In 2012, according to the U.S. Federal Bureau of Economic Analysis, arts and culture production accounted for $698 billion, or 4.32 percent of the nation’s economy. Surprise: that’s more than construction, transportation or tourism.

In Maine, by 2014, there were 3,262 arts-related businesses sustaining 10,667 jobs. In other words, the arts account for almost 4 percent of the total number of businesses in Maine and 1.6 percent of total employment.

Everywhere we turn, Maine communities are in transition—and our downtowns are coming back to life. The economies that made Maine what it is—extractive industries such as timber and fishing, and industrial-era manufacturing of textiles and shoes—began to steam slowly into the distant horizon 40 years ago. New economies continue to slowly arrive in their wake, but we don’t always recognize or nurture them. Often, they make us feel caught in a dangerous rip tide we don’t have the skills to navigate.

So here’s some good news. As the role of U.S. workers in the global economy continues to change from the manufacturing of goods to the creation of ideas and services, Maine—with our long history of creativity, arts and innovation, and strong population of artists—is perfectly poised to take advantage of this shift. With better recognition, acknowledgement and investment, the arts and creative industries can increasingly provide the fuel Maine needs to blast into its next era of greatness.

The evolution of Rockland—featuring this summer’s grand opening of a newly designed and constructed the Center for Maine Contemporary Art (CMCA)—is a case study in the importance of arts and culture to the revival of Maine’s historic down towns.

“The great landing place,” once driven by shipbuilding, lime production and fishing, has become a mecca in Midcoast Maine for those wanting to experience and make art and culture—as well as for those who want to live and work in a culturally vibrant environment.

Anchored by the internationally-renowned Farnsworth Museum and Library and the renovated Strand Theater, Rockland and the area draw sell-out crowds from throughout Maine and beyond to special cultural events such as the North Atlantic Blues Festival, the Camden International Film Festival and the Island Institute’s own Archipelago Artists and Makers Conference.

The new CMCA, relocating from its former modest home in Rockport, is designed by one of the stars of U.S. architecture, Toshiko Mori (who formerly worked with Edward Larrabee Barnes, the famed designer of the Haystack Mountain School of Crafts on Deer Isle) to be a destination in its own right.

And all those people visiting museums and seeing shows, buying and making art and relocating to a place with a great quality of life? They also drink lots of locally roasted coffee and locally brewed beer and eat lots of locally caught fish and locally farmed produce.

Nonprofit arts organizations, drawing people to events, exhibits, classes and more, are the seeds for this type of healthy, diversified growth: the coffee bar doesn’t pop up on its own. For the tiny investment we make in our cultural nonprofits our communities reap great returns: generating almost five times the amount in local, state, and federal revenues above what government allocates to them, according to Americans for the Arts.

While the economic impact of the arts and cultural sector is often overlooked and underfunded by policy makers—greater investment equals greater return—it’s not the money alone that should turn our heads or influence policy. Learning in and through the arts enhances student learning in all subjects. And it doesn’t take data or test scores to tell us what we know in our hearts: art makes the human spirit—and the communities in which these spirits gather—sing.

Linda L. Nelson was for 17 years the founding executive director of Opera House Arts, which restored and revived the 1912 Stonington Opera House, on the National Register of Historic Places, on Deer Isle. She is currently Assistant Director of the Maine Arts Commission. 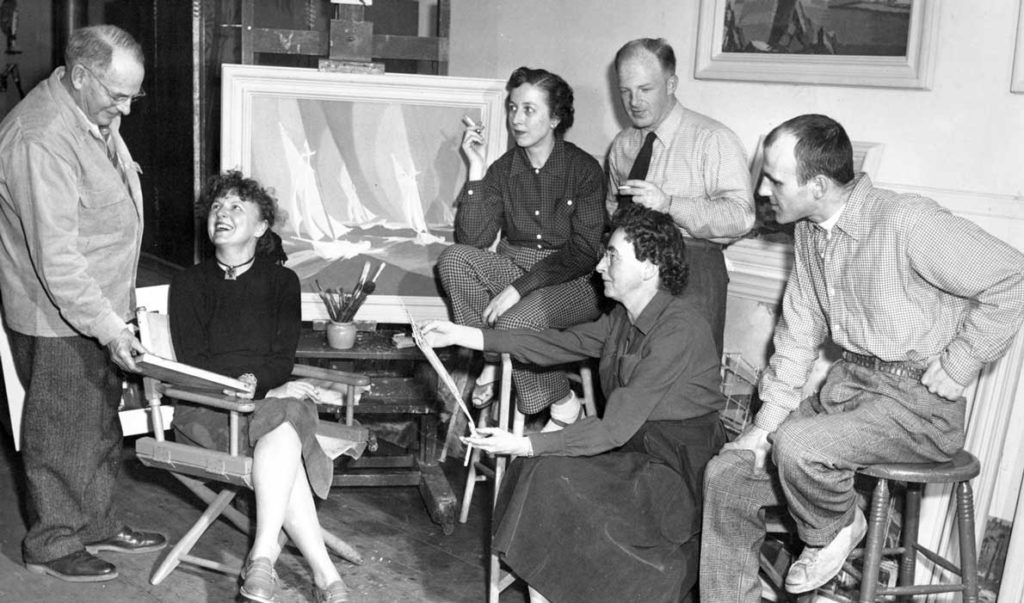 Some of the early members of Maine Coast Artists