Maine Maritime Academy students, officers and crew will depart Castine on Saturday, Jan. 2 at about 10:30 a.m. on the training ship State of Maine for a two-week training voyage to St. Croix, U.S. Virgin Islands. The ship will carry 210 students and crew and is due to arrive on Jan. 8.

Under the direction of Capt. Leslie B. Eadie III, master of the State of Maine, preparations for the educational voyage began in Castine on Dec. 30. Captain Eadie, of Brewer and a 1976 graduate of the Academy, assumed command of the vessel in 2011. Well-wishers are welcomed and encouraged to view the vessel departure and return from the Maine Maritime Academy waterfront or via webstream at www.mainemaritime.edu/streaming. Friends, family, and fans are invited to follow the ship’s journey through the cruise blog at cruise.mainemaritime.edu and the cruise Facebook page (www.facebook.com/mainemaritimecruise). The training ship will depart St. Croix on Jan. 11 and return to Castine on Jan. 16, weather permitting. Training activities will continue in port through Jan. 19.

In response to an increase in sea time and instruction required by STCW (Standards for Training, Certification and Watchkeeping,) as of the admission of the Class of 2017, the summer cruise was lengthened to 90 days. During transition to the new 90-day/45 and 45 model, the winter cruise was planned to include juniors for a 15-day training cruise in January 2015 and January 2016 in order to make sure those students could satisfy their sea-time requirements.

Students pursuing an officer’s license from the U.S. Coast Guard as a third mate or third assistant engineer are now required to train at sea for at least 300 days during their first three years at the Academy. Freshmen and juniors sail aboard the MMA vessel while sophomores are assigned to merchant ships worldwide. In past years, MMA training cruises have taken students to Aruba, Bermuda, Belgium, Brazil, Canada, Estonia, France, Germany, Iceland, Italy, Malta, Poland, Puerto Rico and Russia, as well as other European and Caribbean countries.

The 500-foot, 16,000-ton State of Maine, originally commissioned as the USNS Tanner, served as a Navy oceanographic research vessel before being converted in 1997 to accommodate the training needs of the college. The fourth vessel to bear the name State of Maine, the ship is a modern, technologically advanced training vessel.

Maine Maritime Academy is a co-educational, public college offering 18 degree programs in engineering, management, scienc, and transportation. The college serves approximately 950 undergraduate and graduate students in career-oriented programs of study. Maine Maritime Academy was ranked the #1 Best Public College on Money magazine’s Best Colleges lists released in 2014 and 2015. The college’s persistence, retention and graduation rates are well above national averages, and the job placement rate is in excess of 90 percent within 90 days of graduation. For more information, visit mainemaritime.edu. 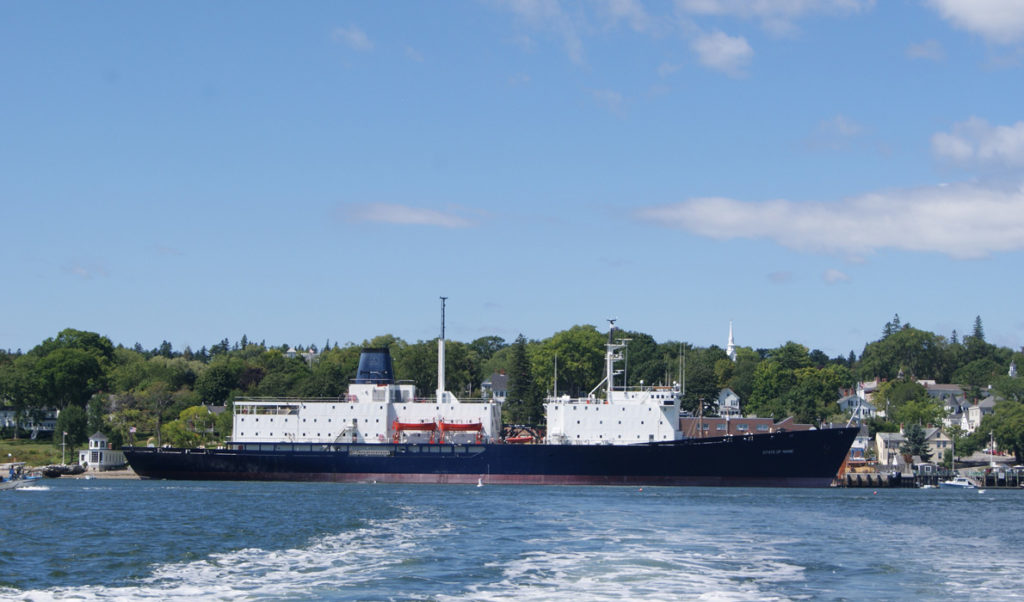