No, Mainers were not watching movies in 1820 when the state was established. But celebrating Maine’s role in film is an appropriate facet of the bicentennial celebration, say Mike Perreault and Tom Wilhite, who are producing the “Maine in the Movies” film festival.

The festival brings more than 25 films to 15 venues across the state, from March 6 through March 15. The selections include stories set in Maine, films based on works written by Mainers, and films shot here.

“These films all reflect the different facets of Maine,” says Perreault, who is the executive director of the Maine Film Center, the organization that sponsors the annual Maine International Film Festival in Waterville. How Maine sees itself, and how others in the larger world see the state are worthy of consideration, he argues, and the films spark thought about both.

The idea for the festival originated with Perreault and Wilhite, a producer and former Disney executive. They developed last year’s “John Ford 125 Years” film festival, honoring the work of the late Portland native who won four Oscars as a director.

The selections for Maine in the Movies range across genres and eras, and from the mainstream to the obscure.

The double bill for March 9 at Bucksport’s Alamo Theatre, featuring 1936’s Captain January, starring the perennially cheery Shirley Temple, paired with 2019’s The Lighthouse, a dark film about a descent into madness, suggests the festival’s guiding principles. Both movies are set in lighthouses, and, interestingly, both are shot in black and white and an almost square camera frame, yet that is where the similarities end.

Captain January is based on a story by the prolific author Laura E. Richards, who lived most of her life in Gardiner and is further distinguished for having been the first recipient of the Pulitzer Prize in biography. Though it is a musical comedy, some serious themes emerge, such as rural simplicity and purity vs. automation and institutionalization, with Maine served up as a prototype of the former.

The Lighthouse had its genesis in a fragment of a story by Edgar Allen Poe, and is classified as a horror film. Maine may be understood here as a bleak, harsh setting that challenges sanity.

Bambi, perhaps unknown to many, has definitive ties to Maine, says Wilhite.

Maurice “Jake” Day, an animator at Disney who grew up in Damariscotta, lobbied studio head Walt Disney to have the story set in Maine. Day had spent time sketching in Millinocket and at Baxter State Park, he said, “And the art department used that material to get the look and feel of the film.”

Disney also worked with state government to have two fawns sent by train to Hollywood where they lived at the Disney Studio so animators could study their movements. Bambi’s other connection to Maine is its musical score and songs—composer Frank Churchill came from Rumford.

Maine’s relationship with motion pictures also includes some resistance to how the state is depicted. Peyton Place (1957), filmed in Belfast, Camden, and Rockland, brought star power and excitement to the area, but it painted a picture that included rape, illegal abortion, and class oppression.

Acclaimed documentarian Frederick Wiseman’s Belfast, Maine (1999) showed the town’s poverty as well as its more prosperous side, and was panned at the time by community boosters.

Perreault and Wilhite note two other films that speak to Maine’s complicated relationship with movies: the Rodgers & Hammerstein musical Carousel (1956), filmed in part in Boothbay Harbor and Camden, and The Shawshank Redemption (1994), based on a Stephen King short story. Carousel might seem like a lighthearted musical, but it includes class tensions and an incident of domestic violence. Shawshank Redemption has comedic moments, but is set in a corrupt, violent Maine prison.

“Maine is a state of mind,” says Perreault, himself a native of Van Buren and a graduate of Colby College, the University of Maine, and Maine Media. But that state of mind varies based on perspective—from the distance of Disney’s 1940s Hollywood or the New England insider proximity of Peyton Place author Grace Metalious.

The festival also offers up historical nuggets, such as the fact that before Rin Tin Tin, Toto, and Scooby Doo, the first animal movie star was Jean, the “Vitagraph Dog,” a collie from Eastport who appeared in 22 short films from 1902 to 1914, directed by her trainer, Robbinston-born Laurence Trimble.

A short trailer, which artfully blends clips from many of the films featured in the festival, may be seen here: http://bit.ly/35PXNgk

For the complete schedule, see: MaineMovies200.com

Venues participating in the Maine in the Movies film festival

Films included in the festival 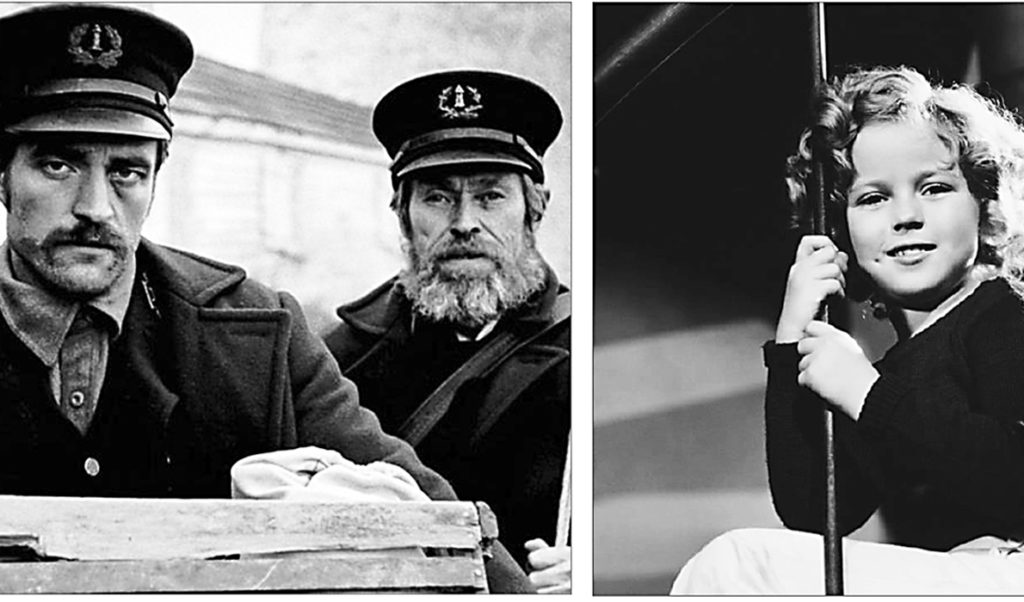 Production still from The Lighthouse (2019) and Captain January (1936)