We’ve all heard stories of Ye Olde Gulf of Maine. Once upon a time, fish swam up Maine’s rivers by the billions while herring gulls—these days known as “flying rats”—were nearly wiped out.

In still earlier times, whales could be spotted from shore and pursued by oar. And just before the dawn of recorded history, our gulf was much less salty, and mastodons roamed and grazed across what is now Georges Bank. The Gulf of Maine has been through many transformations.

The Gulf of Maine is changing again, but this time it’s much more rapid. The rate of recent warming far exceeds what we’ve seen anywhere in the ocean, and so we have an exclusive front-row seat at the premier screening of the Climate Change Show.

The fast warming has sent a jolt through the ecosystem. Many of the recent changes—from the decline of northern shrimp and cod to the arrival of green crabs and jellyfish—have been well reported, though we’re only just beginning to understand the implications. But funding for research is tight, many places along the coast are remote, and there are surely many developments that we haven’t yet recorded.

As early witnesses to the effects of climate change, we in Maine have a special responsibility. By the nature of climate, some areas of the world will be hit sooner and faster than others. In the Gulf of Maine, change has come sooner. Those that experience it later will look to the Gulf of Maine as a case study. Our responsibility, therefore, is to learn. We need to observe what’s happening, record it, and try to understand it, for the benefit of Maine and elsewhere.

When it comes to observing the changes unfolding, we all have contributions we can make. Two years ago, when jellyfish began showing up in droves, there was no funding for a scientific survey. I turned to citizen reports as a source of information, and last summer, I received hundreds.

My email was flooded with detailed accounts and inquiries of the unexpected happenings off our coast. I enjoyed some entertaining and insightful exchanges with all sorts of people. With that information, I’m able to start filling in the map of jellyfish blooms. There were massive blooms in Midcoast (moon jellyfish) and Downeast Maine and New Brunswick (whitecross jellyfish).

I’m collecting jellyfish reports again this year, and if you encounter something that’s not a jellyfish but seems noteworthy, please send that along as well. As we build toward multiple years of data, we might be able to better understand and predict jellyfish blooms.

By opening up an email address to collect reports last summer, I got more than just jellyfish sightings. Along with the reports, people passed along other context, such as, “We’ve seen more jellyfish than in the past 60 winters,” or anecdotes about growing up on Maine’s coast in the 1930s.

It’s clear that there’s a valuable source of knowledge along our coast. That knowledge should be a part of the equation as we observe and learn about the remarkable changes happening in the gulf.

In addition to my jellyfish reporting program at Bigelow Laboratory, there are lots of opportunities for people to contribute, like the Gulf of Maine Research Institute’s Vital Signs program, or MDI Biological Laboratory’s community-based eelgrass project, as well as many local land trust volunteer programs, to name a few.

I encourage anyone who spends time on the water or on the coast to seek ways to contribute your knowledge and observations. If we get as many eyes on the gulf as possible, we’ll have a better chance at understanding these rapid changes, which can benefit Maine and other places that likely have similar disturbances in their futures.

To report a jellyfish sighting, email the date, time, location and description to jellyfish@bigelow.org or enter your sighting information at this website: https://jellyfish.bigelow.org/jellyfish/

Dr. Nick Record, who is a guest writer for this month’s Fathoming column, is a senior research scientist at Bigelow Laboratory for Ocean Sciences. 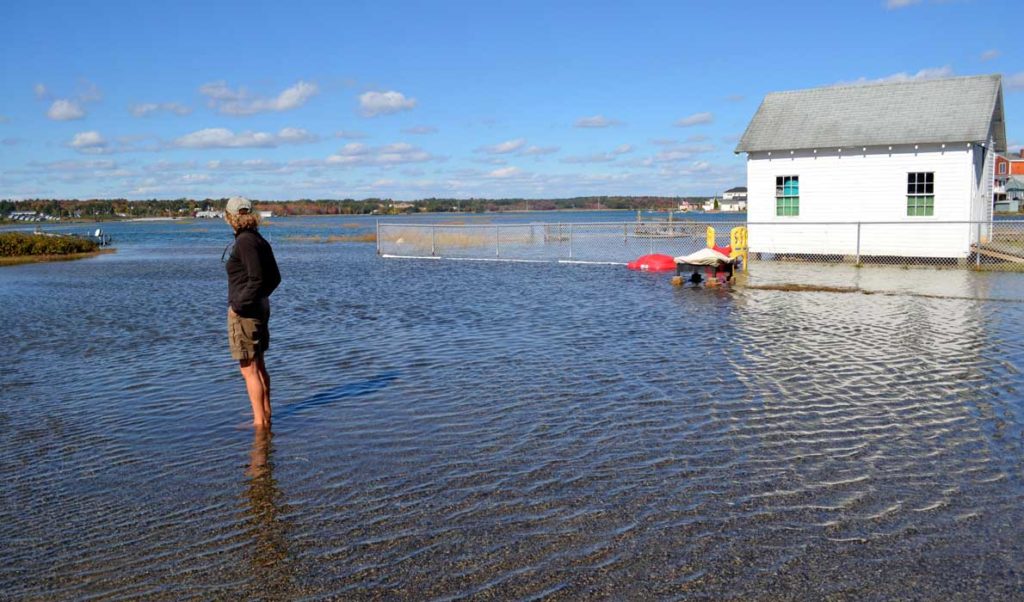 The highest tide of the year in Wells.