Maine natives and cousins Jim Tselikis and Sabin Lomac had customers lined up 50 deep the moment they began selling fresh Maine lobster rolls from their food truck in Los Angeles.

A few months later, they were on television’s reality investment show “Shark Tank,” partnering with real estate mogul and investor Barbara Corcoran, who promptly steered them into national expansion of their business, Cousins Maine Lobster.

In short order, Corcoran got them appearances on national programs such as “The Katie Couric Show,” “The Today Show,” and “MasterChef.” They sold $250,000 worth of their family-recipe lobster pot pie in the four hours following their “Good Morning America” segment.

Today, the company has food truck franchises in 11 major cities across the U.S., a thriving mail order business for live and processed lobster as well as prepared dishes, and sales projections of more than $7 million for 2015. They were named the L.A. Hot List’s No. 1 Food Truck two years in a row.

“You take a risk,” said Tselikis, reached by phone in L.A. “I moved across the country, left my family and friends and a secure paycheck. But it was for the greater good of doing something I’m passionate about.”

Tselikis grew up in Cape Elizabeth and Lomac in Scarborough, in Southern Maine. As cousins, they spent childhood time together. Tselikis went off to Worcester, Mass., to study political science, then lived in Boston working for a medical device company. Lomac, after studying drama in New York, decamped to California’s sunnier clime for a real estate career. During the grueling winter of 2011, Tselikis visited Lomac to get a little sun.

“We had an amazing time,” Tselikis said. “We have similar personalities, the same work ethic, same interests.”

Tired of corporate life, Tselikis and Lomac thought they should do some type of enterprise together. As it happened, L.A. was in the midst of a food truck movement. Jonathan Gold, for Smithsonian Magazine in 2012, wrote that food trucks were “the new incubators of culinary innovation” for food that was “novel, inexpensive and fast.” The movement’s roots could be found in L.A., Gold wrote, largely due to the success of taco trucks, followed by similar trucks offering various national cuisines.

“We said, ‘Let’s do something we grew up with and care most about. Let’s do a food truck and sell Maine lobsters,'” Tselikis recalled. They invested $85,000 to open their first truck in April 2012. Sales were $65,000 the first month and have climbed ever since.

They soon caught the attention of the producers at ABC’s “Shark Tank.” Before shooting the show in July, they went into full prep mode.

“The big thing was understanding the show and the investors,” said Tselikis. “We watched every episode that ever aired, learned about the questions the investors would ask—finances, distribution, supply, sales. Learned about their competencies so we would know whom we wanted to target. We knew our business 100 percent, so we felt comfortable, going in, that they wouldn’t ask a question we didn’t have an answer to.”

The resulting partnership with Corcoran brought a $55,000 upfront investment. But her advocacy and mentoring have been worth far more, said Tselikis.

“Barbara has been unbelievable—and still is, two-plus years later.”

In USA Today, Corcoran says Cousins is one of her favorite “Shark Tank” entrepreneurs—and, she said, “They’re so young and good-looking and they flirt with me.”

The cousins expanded from food trucks to online marketing, selling live and processed lobster, as well as lobster roll “kits,” prepared dishes and even whole meals.

The Casco Bay Lobster Bake, for example, includes two Maine lobster tails, eight ounces of mussels, five to six bay scallops, four Atlantic red crab claws, four shrimp, and two ears of Maine corn, delivered in a foil pouch with lobster-infused butter and alder wood chips for aroma. All the customer needs to do is toss the pouch in the oven or on the grill. There are specialties such as lobster mac and cheese, crab cakes, lobster bisque, gelato from Brunswick-based Gelato Fiasco, and Maine’s iconic dessert, the whoopie pie.

The prepared items, based on family recipes, are cooked and packaged in Southern Maine. Future plans include opening a brick-and-mortar restaurant in West Hollywood, and continued expansion of the franchise.

“This is not just a guy who popped up in a truck somewhere and said, ‘Hey, I want to try this,'” said Tselikis. “What we’re proud of, and what we think is important, is that we are two guys born and raised in Maine, we call Maine home, our families are there. The story and the brand are traceable back to Maine. We know the difference in the lobster product, and we’re honored to be using Maine lobster. 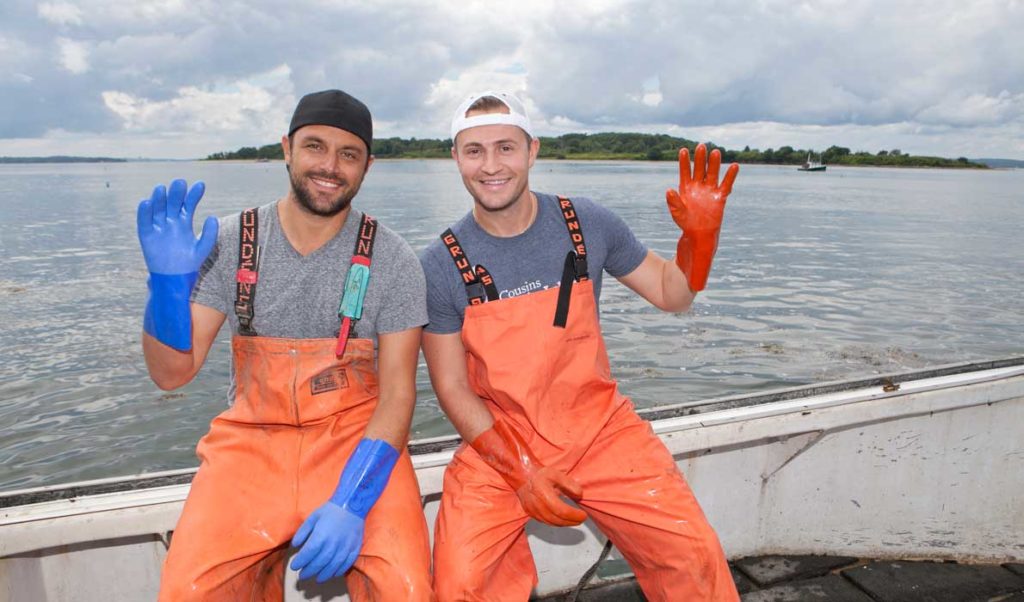