A day-long conference devoted to beaches on the coast of Maine, in July, might seem like, well, a day at the beach. In fact, beaches here are at the center of threats and debates.

The conference, sponsored by Maine Sea Grant with the collaboration of many other groups, was held at Wells High School, just a mile or so from Moody Beach. That beach was at the center of a landmark court case in the late 1980s that resulted in Maine’s highest court finding that beachfront property owners held title to the intertidal zone, the land between the high tide and low tide lines.

John Duff, an associate professor of environmental law at the University of Massachusetts Boston presenting at the conference, traced the history of the law governing public access to the shore in New England.

Maine and Massachusetts are what he called “low-water states,” meaning that control of the intertidal zone is held by upland property owners. The Colonial Ordinance of 1647, which held sway in the regions that are now Maine and Massachusetts, dictated that public use of the intertidal zone was restricted to “fishing, fowling, and navigation.” Maine’s highest court—the Supreme Judicial Court, known in legal circles as the Law Court—cited the 1647 law in finding for the land owners in the Moody Beach case.

New Hampshire, with its 14 miles of coastline, is a “high-water state,” Duff said, meaning that private ownership ends at the high-tide mark.

More recent Maine cases, such as one involving Goose Rocks Beach in Kennebunkport, offered the Law Court the opportunity to expand the list of acceptable uses of the intertidal zone beyond “fishing, fowling, and navigation,” Duff said, but no substantive change has come. The lack of action may be because landowners along the entire coast could claim such a ruling devalued their land and they could file damages claims.

In a 2011 case, the Law Court ruled that scuba divers in Eastport had access to the intertidal zone, though Duff said half the justices said the activity was a form of navigation, while the others found it was “time to recognize an evolving set of uses.”

Another path toward broadening public access could come through prescriptive use, said Amy Tchao, an attorney with the firm Drummond Woodsum, who has represented the parties in some key access cases. One of those cases was in Harpswell, the town with the longest shoreline in the state, at 220 miles.

The public had used Cedar Beach Road for decades to get to the beach, but the private landowner recently blocked it.

“That was a perpendicular access case,” Tchao said, differentiating it from what she termed “lateral” access cases, such as with Moody Beach. Recent Law Court rulings suggest that “public prescriptive easements are disfavored,” she said.

If the public and private landowners can negotiate before litigation begins, Tchao said, workable solutions often can be found. The Goose Rocks Beach case included some 270 parties and most have signed a use agreement allowing access.

Ben Leoni, an attorney with the firm Curtis Thaxter, represented the company Acadian Sea Plants in a recent case in Washington County. At the Superior Court level, a judge ruled that rockweed—which grows in the intertidal zone and is harvested by his client—is owned by the upland property owner. The court also ruled that harvesting the rockweed, which is often done from a boat, is not a form of fishing, and so does not comply with the “fishing” component of the Colonial Ordinance.

Leoni said the decision was appealed to the Law Court. He will argue there that colonists harvested seaweed, taught to do so by native people to fertilize gardens. Rockweed can live for decades, he said, and sheds up to 60 percent of its biomass each year, so harvesting a portion does not threaten its health.

“You might be able to guess where the law is going,” Duff said, “but you can’t be quite sure.”

Another presenter, Keri Kaczor of the University of Maine Cooperative Extension, reported on the Maine Healthy Beaches Project, which tests waters at beaches where people swim. Beaches in Wells, Portland, Camden, and Lincolnville have failed to meet federal safety standards for fecal matter, she said.

But in about 85 percent of cases, Kaczor said, retesting has shown the beaches to be clean, suggesting that Maine’s tides have a flushing effect. Still, fecal bacteria can regrow in sediment and seaweed long after the source is gone, she said.

The group has a website where the status of beaches is listed: MaineHealthyBeaches.org.

Kaczor reported on an effort to lower the threshold at which the Environmental Protection Agency deemed beaches to be unsafe. The move followed a suit against EPA from an environmental advocacy group after a New Jersey sewer treatment plant released contaminated water. She said stricter standards may not be necessary in Maine, and could hurt tourism.

The changing face of beaches, or their accretion and erosion, which is how scientists describe it, is being monitored by volunteers working for a state mapping program. Ten Southern Maine shores, with 29 data sets, are being measured by volunteers throughout the year.

As one example, at Goose Rocks Beach in Kennebunk, four stations were established and measurements are taken in winter and summer from the tideline to the dunes. At one end of the beach, the dune has grown, while beach is eroding at the other end.

Up to 25 feet of beach have disappeared at the river end, Pete Slovinsky of the Maine Geological Survey reported, while at the other end, 15 feet has been added.

A related issue, federal flood zone mapping, which can dramatically raise home insurance, was discussed by Jim Nadeau, a surveyor. He related an incident in which a home in Berwick sustained damage from a co-called 100-year storm. The homeowner believed she was free from threat for another 97 years, when in fact the house faces a 1 percent annual risk.

Nadeau also reported a case in Standish where a house was 30 feet above sea level, yet the homeowner was paying $5,000 a year for required flood insurance without challenging the mapping. When the height above sea level was established, the insurance cost dropped. 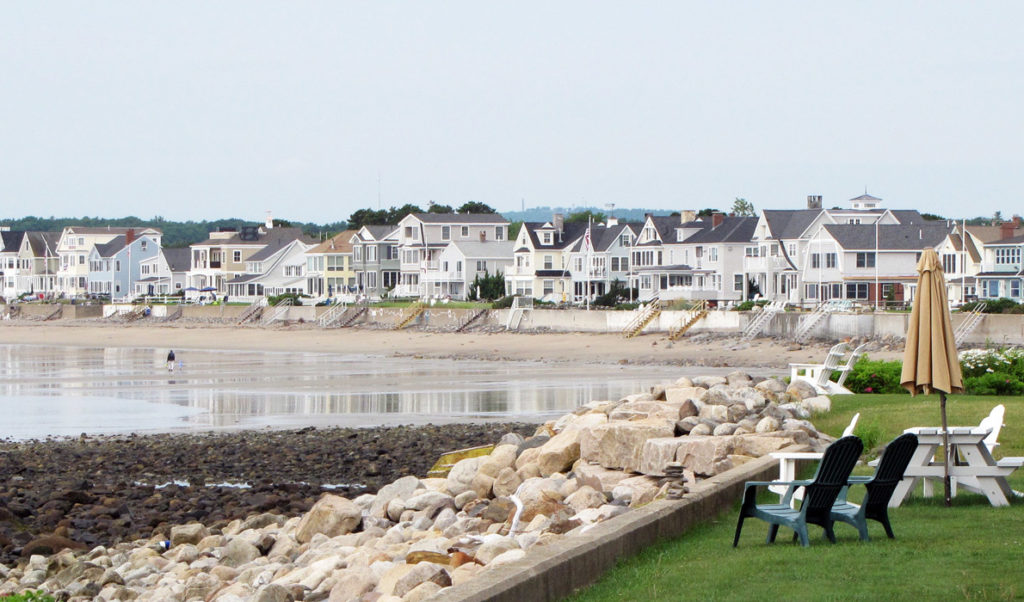 Houses close to the shore on Moody Beach in Wells