The elements that would fill the magazine he has published for 30 years were all at hand. John Hanson remembers that day in the late 1980s clearly, sailing with artist friends through the Fox Islands Thoroughfare, eating a gourmet lunch, watching dinghy races.

“This is what I want to write about,” he recalled thinking, describing the idyllic moment, with shingle-style mansions in view, and the conversation touching on creative endeavors, fine food, and boats.

“And just then, porpoises crossed the bow,” putting a sublime topping on the experience.

Within a year, Hanson would launch Maine Boats & Harbors magazine, which later would be rechristened Maine Boats, Homes & Harbors. Adding the “homes” part of the name was not an after-thought or a change in mission, but rather the result of a threat of a lawsuit from a like-named (though editorially different) publication.

Homes, furniture, and other lifestyle amenities always were part of the concept, Hanson said, and though the newer name is a bit of a mouthful, it does convey what the magazine aims to bring to readers.

By way of example, he notes that the first issue included a story about an estate on Islesboro.

“We try to look at all that life on the coast with the sensibility of a boater,” he said. 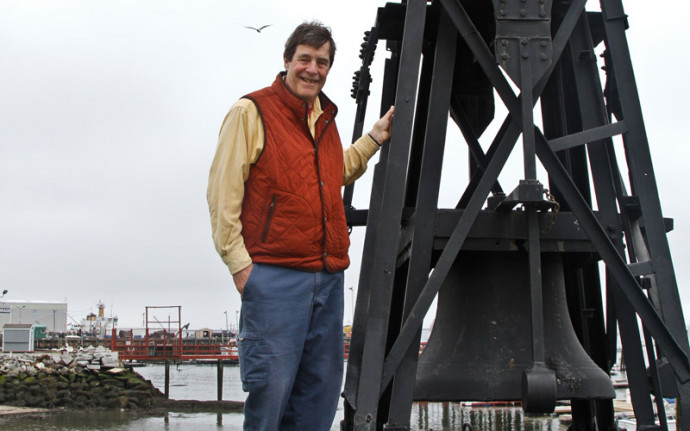 It’s an alluring mix, making for lively fare and lovely images for the reader. There are stories to satisfy the hard-core boat crowd, those for whom references to nautical terms and boat designers don’t need to be explained. But there also are profiles of artists, features on distinctive houses, historical pieces, and regular columns from boating luminaries.

Surviving and thriving in the competitive and increasingly challenging publishing world is nothing like that leisurely sail that inspired the magazine. Hanson, 66, has had to adapt and consider new ideas.

But learning and growing have characterized the course he’s followed since arriving in Maine in 1973, a period when many baby boomers were looking for a richer, if less financially rewarding life in rural locales like coastal Maine.

“I wanted to do something rewarding and socially significant. It was really exciting that you could invent yourself” in a setting like Maine, he said.

Boats were an early love. He still owns the 1958, 3-horsepower Evinrude outboard he bought as a boy.

As a young adult in the early 1970s, when fiberglass boats were supplanting traditionally built vessels, he found he had a passion for the craftsmanship associated with wooden boats. That led to a job at Hinckley Yachts on Mount Desert Island. The three-year stint there “was almost like graduate school,” Hanson said.

He and a friend then started their own boat-building business, the Southwest Harbor Skiff Company, in an old chicken farm they rented for $20 a month. The place was big enough to rent space to other craftspeople, leading them to name it, informally, “Chicken Sh— Industrial Park.” Hanson chuckles at how little he knew about the boat business then.

“I think we were better with names than we were with boatbuilding,” he said.

In 1976, he wrote about the boat racing event in the Olympics in Montreal for Wooden Boat magazine, which led to a job at that magazine, eventually as advertising director.

He loved the publication, “But it wasn’t covering all the things I wanted to cover,” and after that fateful boat ride, he started his own magazine. Part of the impetus was altruistic.

“I wanted to help my friends,” artists and craftspeople, “and get them out to an audience that could afford those things.”

His approach to the topics the magazine explored was that of someone “passionately ignorant about” such things, he said, leading to answering questions like, “Who built that house? What kind of boat is that?”

Early in the magazine’s life, Hanson recalled seeing stories in the Bar Harbor Times that he wished he had in his publication. The then-editor of that newspaper, Polly Saltonstall, is now Hanson’s wife and editor of Maine Boats, Homes & Harbors.

“She used to drive me absolutely crazy,” Hanson recalled, laughing, when he saw the newspaper beating him to the punch on stories. Saltonstall, a veteran journalist, has been editing the magazine for about three years now, and her knowledge of the coast is apparent in the offerings.

Fifteen years ago, the magazine added a new element to its operation, a three-day show on the Rockland waterfront, featuring exhibitors showing boats, art, building designs, furniture, and related merchandise and services.

At that time, Hanson was publishing the magazine five times a year—it’s now up to six, and circulation averages 20,000—and the show was understood as “the sixth issue,” or “a live version of the magazine,” he explained, where readers can meet and talk with advertisers. Some 8,000-10,000 people attend.

The challenge now is to reinvent the show each year. Last year, it was hosting a Boston Whaler rendezvous.

“People love them and they loved to show them off,” as evidenced by 40 boat owners participating.

“We’ve always tried to do new things,” he said.

This year, a “small-boat love-in” is planned, aiming to draw owners of everything from antique boats to ice boats.

Another addition to the business plan is the website U.S. Harbors, which Hanson purchased about five years ago. The site features tide, weather, and local information for 1,200 harbors along the U.S. coast, and boasts of 4 million users and 15 million page views annually.

“We’d like to do a better job with the local knowledge thing,” he explained, adding information for boaters about showers, laundry facilities, and restaurants.

But the magazine remains at the heart of the enterprise.

“I see magazines as maintaining,” Hanson said. “We’ve really wanted to make a great publication,” and he is proud of the work the staff of ten produces.

The topics—Maine and its harbors, boats, and homes—he readily agrees, are among the things that make life here rich and rewarding

“We just want to spread that joy.” 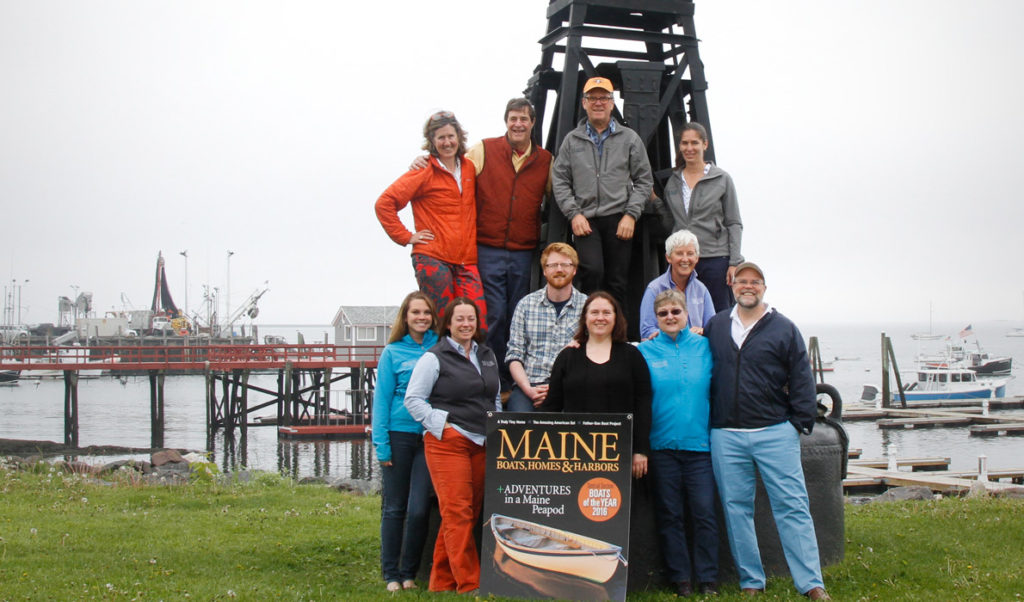 The crew that publishes Maine Boats