Ben Edwards planned to begin harvesting in mid-September, but a new variety of hemp matured almost overnight, possibly in response to heavy rains.

“For whatever reason, this strain is maturing really quickly,” said Edwards, pointing to plants with yellowing leaves. “Ideally, some of these would have stayed out here for another five weeks.”

Weather is only one of a dozen unexpected twists Schoppee Farm has encountered in its second year of operation. Located on the coast in Machias, Schoppee is Washington County’s first and, for now, only hemp farm. Ben, his wife Allison Edwards, and brother Peter Edwards last year set out to grow organic hemp for the wholesale market, where it would be turned into CBD oil and other health and wellness products. Then, the market took a nosedive.

“The wholesale price for hemp products is about 10 or 15 percent of what it was last year,” said Ben. “So that’s about an 85-90 percent price drop, which is extreme.”

Edwards attributes the price drop, in part, to market saturation. Nationwide, thousands of acres of hemp were planted on speculation that large companies would incorporate it into consumer goods, such as drinks or supplements. But the U.S. Food and Drug Administration has not yet released its guidance for consumable hemp products, putting that sector into a costly holding pattern.

So the Edwards took matters into their own hands, shifting from wholesale to direct-to-consumer sales.

“It was never our intention to be a consumer-facing company, but it became pretty obvious that we were going to be in trouble if we didn’t,” said Ben.

Turning on a dime, the Edwards created a boutique line of products they sell through their website, shopschoppee.com. Customer reviews are glowing, and Schoppee’s CBD-infused products range from confections, called Pâté de Fruit, to oils to topical creams.

When the fields were planted last year, many locals assumed the rows of green bushes were marijuana. Though hemp and marijuana are both members of the cannabis family, hemp is grown for its high concentrations of cannabidiol, or CBD, a chemical compound effective in the treatment of a growing list of conditions including anxiety, sleeplessness, chronic pain, and epilepsy, via an FDA-approved drug called Epidiolex.

Unlike its cousin tetrahydrocannabinol (THC), found in large concentrations in marijuana, CBD is not psychoactive, meaning it does not impart a “high.”

“Industrial hemp is simply a classification for cannabis that has a negligible amount of THC,” said Edwards.

The research on hemp’s 100-plus active compounds is still in its infancy, so the Edwards family has partnered with local doctors to stay on top of the findings.

Schoppee Farm also added two new Edwards to the workforce with the return of Ben and Peter’s brother Matt Edwards, and father Dr. John Edwards, who returned to Maine after coronavirus outbreaks loomed large in California. Now they can be seen criss-crossing the farm in ATVs and on motorcycles, helping with a harvest suddenly moving at breakneck speed.

Schoppee Farm has always been a family affair. Ben, Allison, Peter, and Matt are the eighth generation to farm it, and it’s been in their family for more than 200 years. Peter says it was always their intention to restore the land to some kind of agriculture, and briefly considered returning to its roots as a dairy farm.

“We were looking for any crop that was good for the land and soil and also something that was functional enough that we could make the farm sustainable,” said Peter. “[Hemp] was the first crop that looked like it had real potential.”

Future generations and the local economy figured into the choice of hemp, and their choice of business partners. Almost all of the fertilizer comes from Washington County, including organic manure from Tide Mill Farm in Edmunds, and organic sugar kelp grown just off the Machiasport coast, by Nautical Farms.

Maine recently announced its hemp program has been approved by the U.S. Department of Agriculture, which means that beginning Nov. 1, Maine’s hemp growers will need to comply with strict federal guidelines. Unfortunately those guidelines are so restrictive, Ben isn’t sure what, if any, strains of hemp can meet them. When taken together with banking and insurance issues, plummeting prices and other hurdles typical of a nascent industry, it’s fair to wonder—why is Schoppee Farm still bullish on hemp?

“It works,” said Ben. “That’s the bottom line. We have phenomenal results from so many people with so many different issues. There are so many obstacles to get there, but CBD works for a wide range of issues, and it doesn’t hurt people. I love that.” 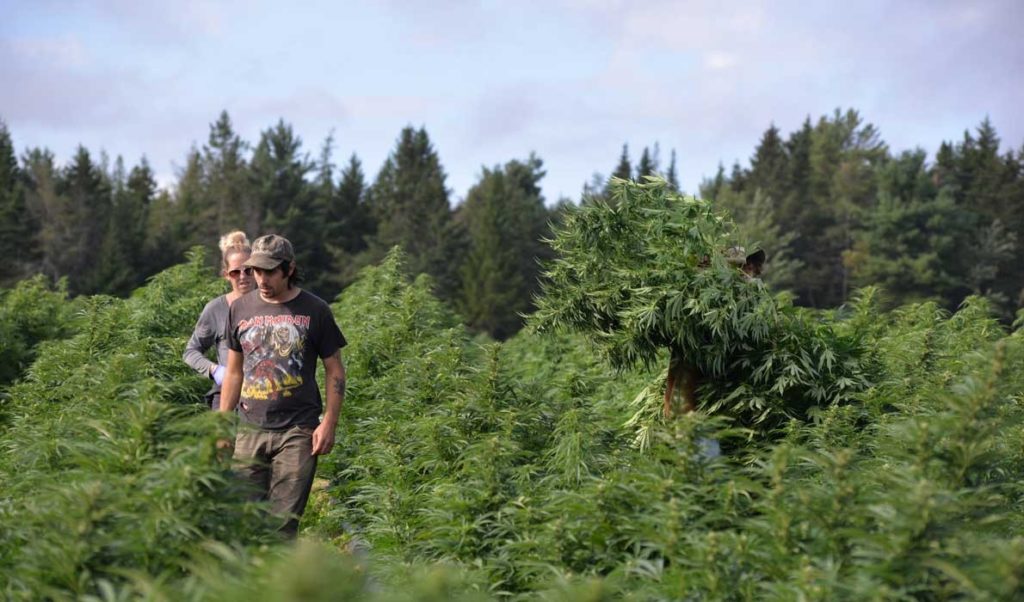 Harvesters walk the rows of hemp, selectively harvesting plants which have unexpectedly matured. When the harvest is fully underway, Schoppee Farm will employ between 50 and 100 local people per month, a well-received addition to the Washington County economy. PHOTO: SARAH CRAIGHEAD DEDMON