Tugboats are the work horses of the maritime world, and seem, by design, to be steady, sure-footed, and safe. But the April Commercial Fisheries News reports on an odd, and probably unusual, tugboat mishap.

Two tugs, the 40-foot Helen Louise and the 80-foot Capt. Mackintire, collided on Feb. 22 off Portsmouth, N.H. while the smaller vessel was towing the larger. No one was aboard the Mackintire, and no crew members were injured aboard the Helen Louise.

A U.S. Coast Guard cutter began towing the Mackintire to Portland, but the tug began taking on water, “forcing the crew to cut the towline, and the tug sank in about 160 feet of water,” the paper reports.

A consistent critique of the state’s lobster fishery is its lack of processing capacity. Too much of the catch goes to Canada, where it is cooked, cut into component parts, and used in prepared food products. This added value brings revenue to the plant owners, meaning Maine fishermen are reduced to selling a commodity.

But there’s good news, the Portland Press Herald reports. Ready Seafood announced in March that it plans to build a large processing facility in Saco, brining the total in Maine to seven.

“We feel it is the right thing to do for the industry, which certainly needs more processing infrastructure,” John Ready, the company’s co-founder, told the newspaper.

The plant is expected to open in the summer of 2019.

Employees were told the company would rebuild the facility, but it could take two years.

In other lobster news, David Cousens resigned—well, retired—after 27 years serving as board president of the Maine Lobstermen’s Association. Cousens has been an effective advocate for the business—smart, articulate, plain spoken, a savvy businessman, and, because of this combination of qualities, ultimately very persuasive.

The board’s new president, Kristan Porter of Cutler, is being hailed as the right man for the job.

Maine lobstermen are apprehensive about possible federal action responding to the deaths of right whales, some the apparent result of entanglement in fishing gear, some from being struck by ships. At the annual Maine Fishermen’s Forum in Rockport in March, fishermen pointed out that no right whale deaths have been attributed to entanglement with Maine lobster gear, but some have died in Canadian waters.

The Quoddy Tides reports the issue was discussed at the Grand Manan Fishermen’s Association’s annual meeting in February. Representatives of the Campobello Whale Rescue Team offered a workshop on techniques and equipment for disentanglement.

Fishermen are starting to take the problem seriously and accept that without solutions the provincial fisheries minister could shut down the fishery, said the association’s Amy Howe. “They understand the importance of the ecosystem,” she adds, and are “respectful of the situation.”

Who says stinky working waterfronts and good food can’t co-exist? The Camden Herald reports that a food truck with a wood-fired oven will serve pizza, burritos and tacos in Rockport Harbor this summer. The Flatbread Company was granted a permit to operate the truck by town selectmen.

The truck will operate 11:30 a.m. to 6 p.m., June 15 through Oct. 30. Rockport Harbor Master Abbie Leonard spoke in support of the application.

In early April, the Maine Superior Court found in favor of the town of Kennebunkport in the contentious Goose Rocks Beach legal conflict. The lawsuit has pitted shorefront property owners against the town. The court granted title rights to the town “of all beach areas in front of all but one of the 23 plaintiffs’ beachfront properties down to the low water mark,” the York County Coast Star reports.

The battle began in 2009, when 23 beachfront property owners filed suit against the town.

“This is an important win for the town of Kennebunkport and for all who believe that Goose Rocks Beach should be open for all to enjoy, not just to those fortunate enough to own property fronting the Beach.” Amy Tchao, the attorney representing said, the paper reported.

It’s a safe bet that the property owners will appeal the decision to the Maine Law Court.

The Maine Ocean School, a public magnet high school with a marine-based curriculum, which we’ve reported on before, is scheduled to open in Searsport for the fall 2018 semester, Mainebiz reports.

The curriculum includes marine science, marine transportation, marine engineering, and marine management. Enrollment is expected to be capped at 30 students in the school’s first year. 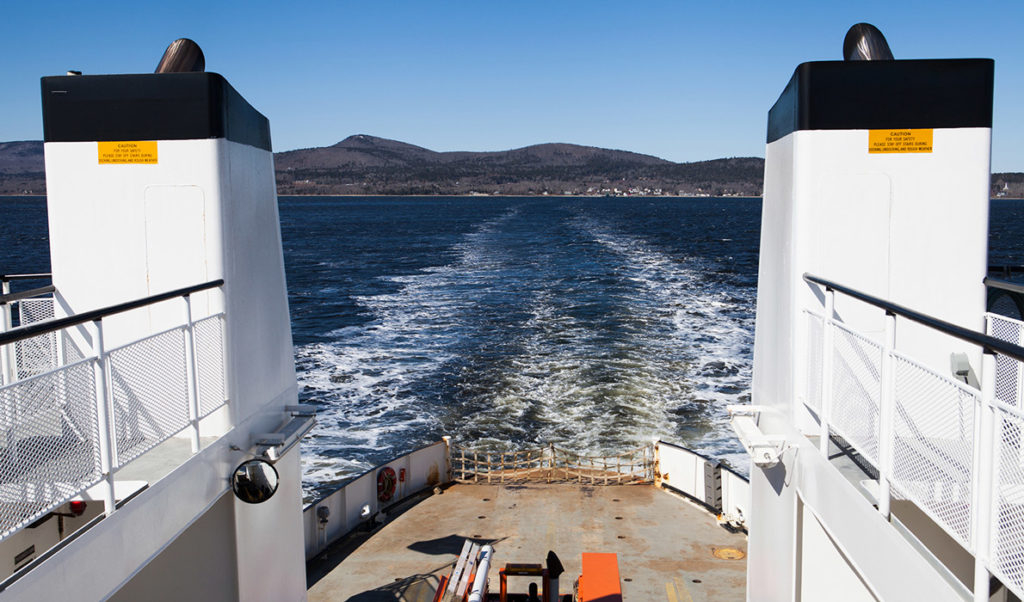 A view to the Camden Hills from the Islesboro ferry.