The ship, a 100,000-ton, 750-foot-long cargo transport, was in heavy weather. The anchor was banging away against the bow. Weighing around 1,600 pounds, it could do considerable damage.

The captain, Mike Flanagan, responded to the emergency by telling a crew member, “Secure the anchor.” The crew member refused.

Flanagan, 67, a Rockland native, is a master mariner and captain, and for 36 years has operated and commanded U.S. Navy support ships. Under his watch, ammunition and other supplies are transported to aircraft carriers. He’s also served on hospital ships, like the Mercy out of Singapore, with 1,000 beds and 12 operating suites, one of the vessels aiding victims of the Pacific tsunami in 2004.

With his experience at sea, Flanagan has learned as much about what not to do, as he has about what to do. He has observed a type of command that results in an “intimidating bridge presence,” which he describes as a captain who is so intimidating that communications come to a stop.

The most important job for a ship’s captain, he says, is building trust. When the crew member refused to secure the anchor, Flanagan realized the man was right to balk. It was too risky.

“The merchant marines is more about asking than telling,” he says.

It’s a strange world, with hours and hours that pass with the status quo, the same routine holding sway, and then the rare moments when life and death decisions must be made. Losing a split second in those moments could mean the loss of a life. Like when Flanagan was captain of the U.S. Navy ship the Washington Chambers.

He was shooting the breeze on the “phone talker,” as he calls the communication device, while guiding an aircraft carrier into place in port, when he heard that a man from the U.S.S. Kidd, a destroyer on his starboard side, had gone overboard.

A later investigation found that a line hadn’t been fastened properly. It broke loose and a woman got a badly broken leg, and a young man, just 19 years old, was thrown overboard. Flanagan reacted quickly, the man was rescued, and airlifted out.

Flanagan would rather have a nervous rookie aboard than a complacent old timer, because when a hurricane or typhoon is near, “It’s like a cobra in the grass.”

Before getting underway, he checks the map for low pressure systems that are 1,000, and even 2,000 miles away. Storms, like snakes, can change direction.

That point leads to the SS El Faro, which lost propulsion en route to Puerto Rico during Hurricane Joaquin, a category 4 cyclone. The ship sank on Oct. 1 of last year with all hands lost. Two members of the crew, a man and a woman, were from Rockland.

He is meticulous about safety: “Drills, drills, drills, double check, triple check” are his routine, he says. Things like getting into your “Gumby suit”—the emergency suit that keeps you warm and afloat in cold water—in a matter of seconds involves training.

Flanagan has his crew practice in the dark, and he pays attention to the little details that can keep you alive. At sea you have to make sure everything is “locked down,” a responsibility that is ultimately the captain’s. And he’s been in some rough seas: “Up to about 60-foot waves, for days.”

After the first 15 years Flanagan began to appreciate his work as a ship captain at a deeper level. He had friends all over the world and he has the satisfaction from a job well done.

This dream began in the 1990s when he was recruiting for Military Sealift Command. Impressed with the numbers of men and women from Maine seeking a career at sea, he and some colleagues came up with the idea—and now the reality—of the Maine Ocean School in Searsport, “a public magnet school for marine science, technology, transportation and engineering.”

Flanagan hasn’t hauled down the sails for good though. He’s planning to be underway again by the middle of November on an ocean-going salvage tug, like the one that NOAA used to help locate the Civil War-era USS Monitor. He’ll be stationed out of Pearl Harbor.

Of his maritime career, he says, “It’s a pretty cool job if you’re from Maine.”

For more information about the school, see: maineoceanschool.org. 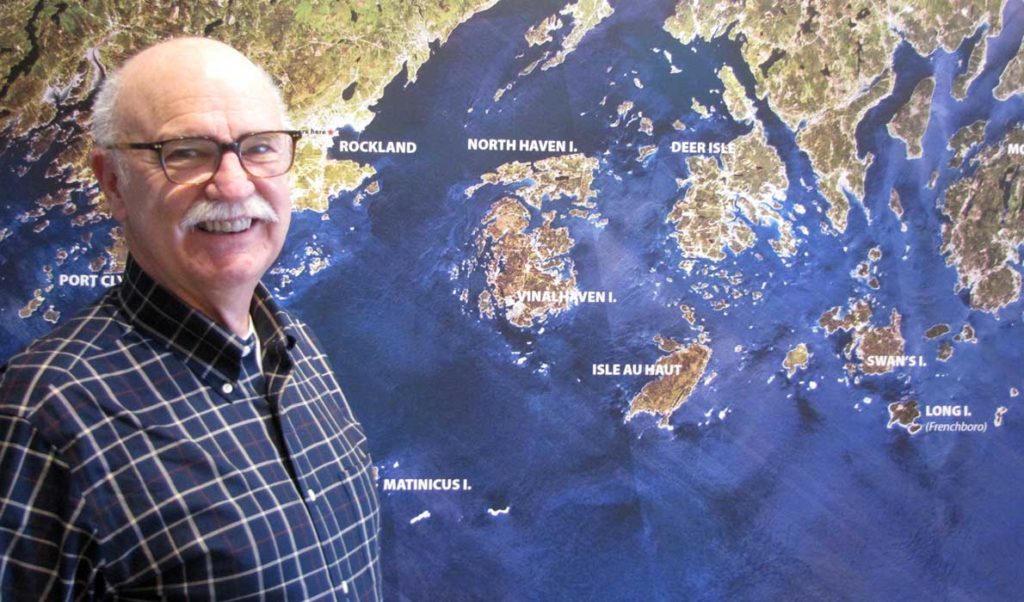