Despite an abundance of egg-bearing adult lobsters and record-breaking harvests, the number of young lobsters continues to fall in the Gulf of Maine.

That’s the 2016 update from the American Lobster Settlement Index, an international monitoring program founded in 1989 by University of Maine marine scientist Rick Wahle.

The settlement index, a collaboration between fishermen and scientists, annually quantifies the population of newly settled American lobsters (Homarus americanus) at more than 100 sites in lobster-producing regions of New England and Atlantic Canada.

In the Gulf of Maine, most monitoring sites from Beaver Harbour, New Brunswick to Cape Cod Bay reported some of the lowest settlements since the late 1990s or early 2000s.

This trend of high egg production but declining numbers of baby lobsters has been occurring since about 2007. Scientists and fishermen are working to better understand the changing lobster population and what those changes could mean for the marine economy.

“If we were to see a collapse in the lobster catch, it would mean that we’re already seven to eight years into a decline in the population,” Wahle says. With the settlement index, “We can get an early warning of what might happen to the catch.”

New England lobster landings have recently been stronger than ever; 80 percent of the landings came from the Maine coast and about three-quarters of the state’s overall fishery value comes from lobster, so “a downward trend in lobster production could significantly impact the state’s coastal economy in the future,” says Wahle, a research professor in the School of Marine Sciences based at the Darling Marine Center in Walpole.

A new data time series is shedding light on the conundrum of falling settlement at a time of increased egg production.

Plankton monitoring off the New Hampshire coast since the 1980s has indicated the abundance of early-stage lobster larvae rises in sync with the surge in broodstock, as would be expected, Wahle says.

But the number of late-stage larvae has been decreasing since about 2007, which strongly correlates with the downward trend in seafloor settlement at multiple monitoring sites from Midcoast Maine to Cape Cod Bay.

Wahle says this suggests recent heightened levels of larvae mortality during the month-long gauntlet between the first and last lobster larval stage before settlement.

Larval lobsters hatch in the early summer. Released into the water, they become better swimmers in the currents. Four to six weeks later, the larvae mature to the post-larval stage and settle on the seafloor.

Changes in quantity or quality of the food that lobster larvae eat could be a mortality factor, Wahle says. The downward trend in lobster settlement parallels the declining abundance of the also-monitored copepod Calanus finmarchicus, which is food for larval lobsters.

Wahle says an increase in waterborne predators of lobster larvae and copepods also could explain the decline in both populations and explain why fewer baby lobsters survive to settle on the seafloor.

“Clearly, we need to better understand these linkages to know whether larval food supply could be a limiting factor in recruitment of Gulf of Maine lobster and the implications of these trends for the future of the fishery,” he says.

To learn more about the ALSI and read the annual updates, visit the Wahle Lab website. 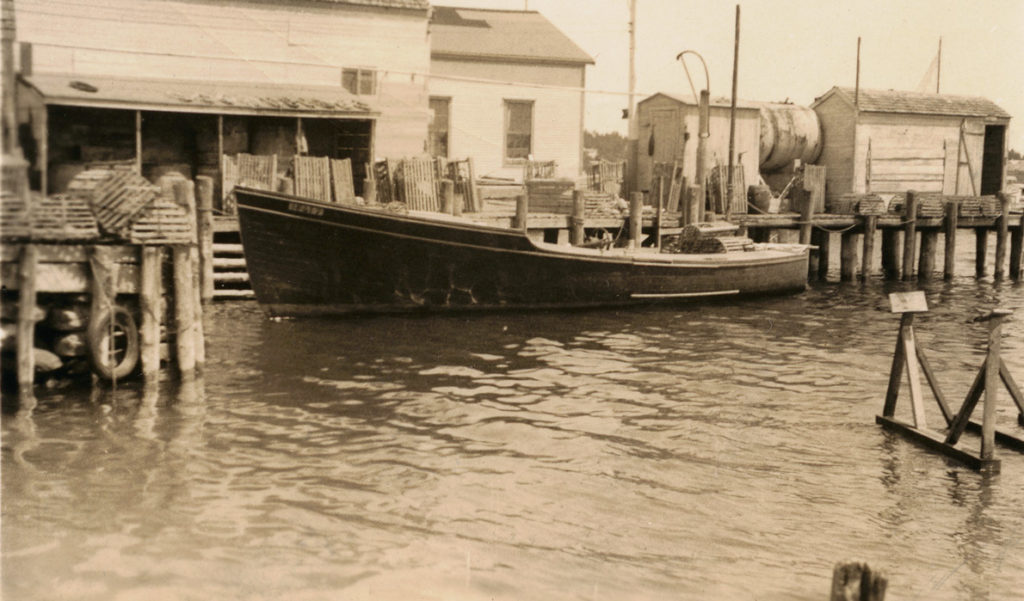 A turn-of-the-20th-century photograph of a lobster boat.