Formed in the midst of the price crisis during the summer of 2012, the Maine Lobstering Union will mark its third anniversary in September. The prices fishermen get have rebounded, but the union remains strong and growing.

The group has over 600 members, and its leaders believe it has become a powerful voice at the state house for matters relating to the industry. And it may return to the price issue with a plan that would make fishermen bigger players in the market.

Rock Alley, 58, of Jonesport, the group’s president, said the union has changed the dynamic between fishermen and larger forces, such as state government.

“The legislative part of it, all of these bills and laws and regulations that come out every year that affect our livelihoods,” he said, seemed to leave fishermen feeling defeated.

“We always come out of there dragging our heads,” he said of the legislative process. Now, by attending hearings and work sessions as members of the union—which is part of the International Machinists and Aerospace Workers union—the fishermen are seen as part of a greater group, Alley said.

“Our voice is being heard,” he said. “I’ve had as high as 50-odd lobstermen standing at the state house, and we’ve all got our union shirts on.”

Among the accomplishments he lists is defeating the law that would have allowed draggers to keep and sell lobsters caught in their gear.

“That wouldn’t have been defeated if it hadn’t been for the union,” Alley said.

Another victory he counts is the passage of a bill that changed the rules on lobster licenses for military reservists. Previously, those in the reserve had one year to renew or apply for their lobstering license, while enlisted men and women got a seven-year window.

Alley’s youngest son served 13 months in Iraq, and it seemed unfair that he would lose his place in line, waiting for a license. Alley put it more bluntly: “It pissed me off.”

Even after contacting then-Marine Resources Commissioner George LaPointe, then-Gov. John Baldacci and a local legislator to submit a bill that would have changed the law, “It never got done,” he said.

But recently, Alley and several fishermen from Vinalhaven worked with a lawyer for the union and drafted a bill that won passage.

The majority rule nature of the union appeals to him.

“It’s a majority decision on anything we do,” Alley said. “Instead of sitting back and jawing, [the union] gets [fishermen] involved. I like that part of it. I’ve held meetings from Kittery to Cutler,” to hear what members want, he added.

Though he is vague about details, Alley said the union is looking into purchasing an existing lobster buying company which members hope could eliminate one of the middle men between fishermen and the market and thereby boost prices.

“We want to buy and sell lobster all along the state,” he said, like a big coop, “so we can get a fair price for our lobster. We’re hoping to get word real soon” on that proposal.

Alley likes the support fishermen get at the state house from other unions, such as those at Bath Iron Works and paper mills around the state. And as the union president, state officials and elected officials lend him their ears.

“The minute I walk through the door they all know me,” he said, so it is not always necessary to pack a hearing room with fishermen to have influence. 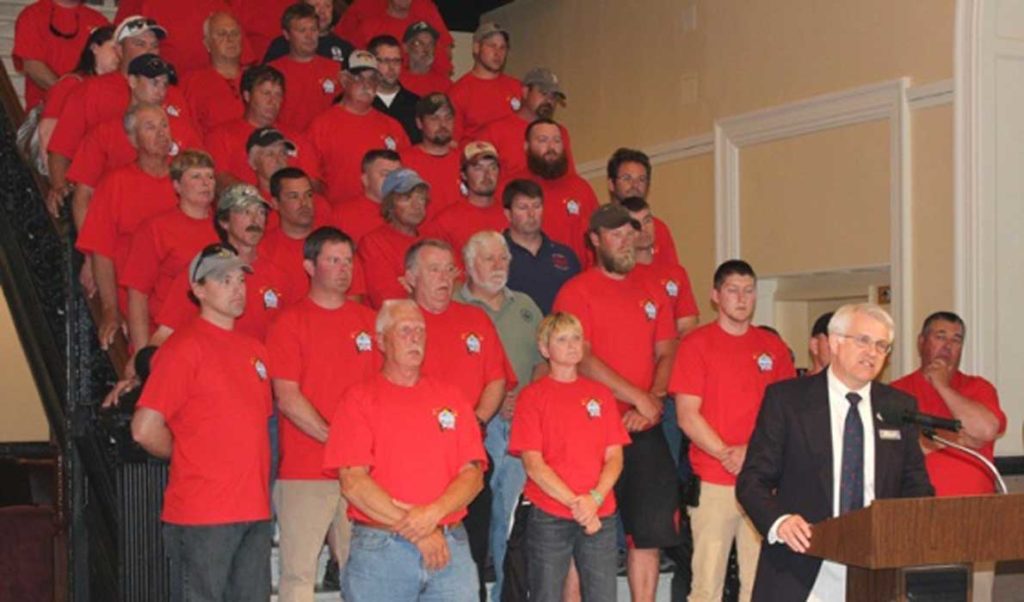