It was a strange year for the lobster fishery. In 2019, the scarcity of bait was a concern, and lobster landings were incredibly slow through the summer months.

The July catch was the lowest recorded since at least 2008, the year the Department of Marine Resources began logging verifiable landings data. In July of last year, landings by pounds were down 60 percent from July 2018 . Fishermen reported the lobsters were around all summer, but just weren’t trapping.

DMR’s lead lobster scientist Kathleen Reardon described how the Eastern Maine Shelf buoy (off Mount Desert Island) at 27 fathoms deep (162 feet) was a full 2-4 degrees Fahrenheit cooler all summer than recent warm years like 2012 and 2016. It wasn’t until September of last year that landings started to be comparable to recent years; October through December landings matched or exceeded last year.

Reardon noted—and EMOLT (Environmental Monitors on Lobster Traps) temperature data confirmed—the jump in landings corresponded with a couple of October storms, which mixed warmer surface water with colder bottom water, causing water temperatures to jump. The Central Maine Shelf buoy (off Pemaquid, south of Monhegan) recorded a rise of nearly 2.5 degrees in October at 165 feet deep, with a total jump from 50.8 degrees on Oct. 1 to 53.2 degrees on Nov. 1. Landings then increased and continued to be above the ten-year average until the end of the year.

While landings were down from 2018 across all zones, Zone A (the easternmost zone) had the highest landings of all zones for the first time ever. After the slowest start in nearly a decade, the fishery still broke 100 million pounds total for the ninth year in a row.

Concerns around bait availability and bait price were high early on in the season. It’s likely that the decline in the number of trips taken (lowest total trips in May, June, and July since data collection started in 2008) alleviated some of the pressure on herring availability. Fishermen took advantage of local menhaden (known as pogies), which ended up equaling the total herring fishery.

Going into the 2020 lobster season, there will be another assessment of herring stocks, and unless there is an improvement in juvenile abundance, there will be the same low, or even lower catch levels, allowed for herring. Fishermen reported seeing a lot of herring juveniles in 2019, which if caught in the review, could push up catch limits.

Dr. Rick Wahle of the University of Maine and the Lobster Institute had good news to report for the first time in years from the cooperative monitoring project known as ALSI (the American Lobster Settlement Index). Numbers of baby lobsters on the sea floor were up across the coast.

For the first time since this nearshore survey recorded a surge in 2005 to 2008, there was good news all the way from New Hampshire to Beaver Harbor in New Brunswick. A deeper look into lobster settlement also revealed promising signs for fishery.

With the expansion of warming water in the Gulf of Maine, Wahle and industry partners, including Ready Seafood, are surveying deeper waters for settling lobsters, a habitat which was formerly inhospitable for the temperature sensitive babies. By just sampling in shallow waters, it was thought scientists and managers might be missing or underrepresenting lobster settlement as a whole.

Sure enough, they have found settlers in deeper waters (up to 215 feet) in both the southern and eastern Maine coast, with depth having more of an impact in southern Maine because of a sharp thermocline (the transition layer between warmer mixed surface water and cooler deep water).

Contrary to what might be expected, eastern Maine’s bottom waters are more similar in temperature to surface waters because the water is better mixed than in southern Maine. In southern Maine, deep-water settlement appears to mirror the thermocline, with numbers higher in the 16-66 foot depth site and fewer settlers in the colder, deeper waters at 135-215 feet.

Other updates from DMR’s suite of historic monitoring surveys and new research endeavors match what fishermen are reporting on the water. DMR’s ventless trap survey, targeting sublegal sized lobsters that could escape from a normal trap, continues to catch high numbers of small lobsters. New data on female lobster size at maturity, from DMR scientist Jes Waller, also aligns with what fishermen are seeing on the water. As water temperatures are rising, size at maturity is decreasing.

For example, in the Boothbay Harbor area, size at maturity has declined from a 3.5-inch carapace length during the 1990s to 3.3 inches today. This has implications for the growth of female lobsters and the quantity and quality of eggs produced. Once a female reaches maturity, her overall growth rate slows because she alternates between egging out and molting. Smaller females may produce lower quality eggs that may be less likely to successfully turn into lobster larvae.

While fishermen warily await further direction on a Maine whale plan, which could determine the fishery’s immediate fate, there is plenty of data from fishermen, managers, and scientists to contemplate to try to better understand the causes of an unusual 2019.

Susie Arnold is a marine scientist with the Island Institute working on the impacts of climate change and ocean acidification on marine resources and fisheries-dependent communities. 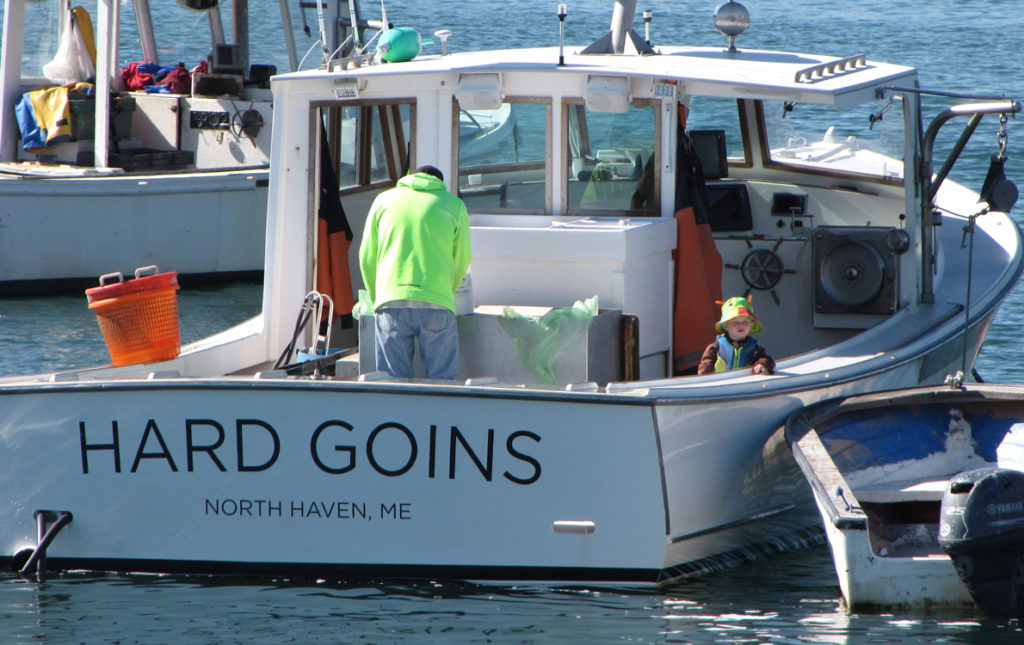 A lobsterman and his young helper in the Fox Islands Thorofare.