Train, traveling from his home on Long Island, off Portland, joined Matt Jacobson, the Maine Lobster Marketing Collaborative’s executive director; Barton Seaver, an Esquire magazine chef of the year, author and leader in the sustainable seafood movement who lives in South Freeport; and staffers from Weber Shandwick, the global public relations firm hired by the collaborative in December 2014 to expand existing markets and find new ones.

“We toured multiple restaurants—Craft and Bar Americain, for example.” The two restaurants are owned by celebrity chefs Tom Colicchio and Bobby Flay respectively, and the group spoke with their executive chefs.

“And we went into the Conde Nast offices, met with people from Bon Appétit and the Wall Street Journal, went to the kitchen where they film Rachel Ray’s show—a lot of different media outlets. It was non-stop.”

Given previous interviews he’s done and the 3-4 hours of media training provided through Weber Shandwick for this trip, Train felt the junket went off without a hitch—and was a lot of fun.

“We would go in and the three of us did a tag team thing,” he said. “Matt would tell the story of the industry and why we’re promoting Maine new-shell lobster. Bart spoke of the benefits of Maine new-shell lobster—its flavor and succulence, it’s sweet and tender—and how to use to cook it. And I spoke about the lobstering experience and about being a harvester. What was really amazing, when we were doing this—we would go into restaurants where people didn’t realize they could get new-shell lobster, and yet they were so close to New England.”

“They loved the new-shell lobster,” said Train. “They couldn’t believe it. We knew there was a difference. And we like the hard-shells, too, but we like new-shell more.”

The trip was part of a series of initiatives devised by Weber Shandwick to position new-shell lobsters as a particularly tasty delicacy that also speaks to consumer trends for healthy, sustainably harvested, traceable product with a story to tell about producers—in this case, Maine’s thousands of fishermen rooted in fishing communities for generations. Lobster become “new shells,” or “soft shells” when they shed the shells that hardened up over the winter and begin to grow new shells that allows them to grow larger, a process that starts in the summer and lasts well into the fall. Maine landings are predominantly new-shell.

The appointment of Weber Shandwick came two years after a 2012 market glut caused a price crash. The collaborative was formed in 2013, replacing the previous Maine Lobster Promotion Council. An increased harvester and dealer license surcharge created an incremental budget: $1.5 million for 2015 and $2.4 million annually through 2018, when the program will be reviewed. This compares with the predecessor budget of less than $400,000 in its final year.

Because about 90 percent of lobster in the U.S. is consumed in restaurants, outreach is focused on chefs as well as traditional and social media, said Jacobson.

One-on-one meetings have proven especially effective, he said, particularly in partnership with fishermen, who have included Train; Frank Gotwals, the collaborative’s board chair and a Stonington fisherman; and Brian Rapp, a captain on Lucky Catch in Portland.

“We had a focus on New York and had some success at Craft and Bar Americain,” said Jacobson. “Oceana, in New York City, is also a big supporter, along with their executive chef, Ben Pollinger. We also brought several chefs to Maine.”

The collaborative launched a new website (lobsterfrommaine.com) in mid-June, which toots the horn for “Maine New Shell,” using slogans such as “Everything Else is Just Lobster” and referring to Maine lobster as “Hand Caught.” The group successfully petitioned Maine’s senators to sponsor a resolution to designate Sept. 25 as National Lobster Day, which was written up in more than 100 publications, receiving over 153 million impressions. On social media, the #NationalLobsterDay hashtag reached over 14 million users.

When that was accomplished, Jacobson asked Sen. Angus King’s chief of staff, Kay Rand, to ask the White House to pardon a lobster on that day. The White House couldn’t work it into the schedule—the Pope was coming that morning, and there would be a state dinner that evening with Chinese President Xi Jinping. So Rand successfully persuaded the White House to serve Maine new-shell lobster at the state dinner. The menu was highlighted in more than 67 Chinese media articles, Jacobson said.

The collaborative has other promotions in the works. Tailgate parties for lobster tails, posted on the collaborative’s Facebook page, received 2.1 million “likes.” Through Oct. 1, 2015, the collaborative secured 471 million media impressions with an ad equivalency of $1.79 million—a media value that alone exceeds the 2015 budget of $1.5 million.

“Couple that with our social media reach and our chef outreach, and we are creating value above our cost,” said Jacobson.

“It will be a big year for us and we are very optimistic and excited,” Jacobson said.

“I think it’s effective and I think it will grow,” said Train. “It takes time. Once, we were landing 20 million pounds of lobster. If we want to sell 120 million pounds, we need to find consumers. The budget is still very low and tools like this are a great way to go about it. The marketing techniques that Weber Shandwick is having us use appear to be very effective.” 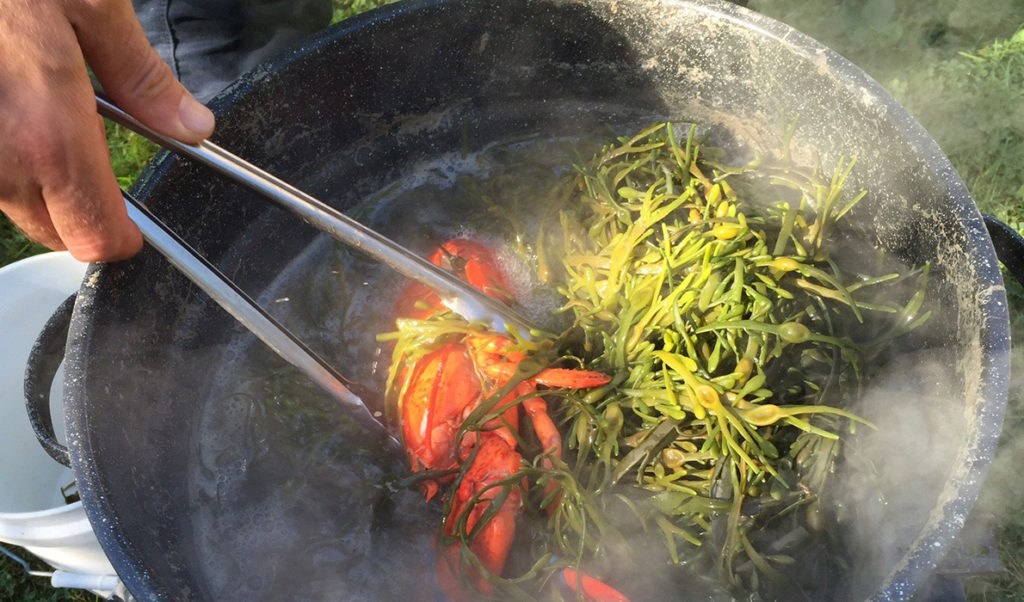