Bobby Beckman is just 22, but when it comes to the lobster business, he takes the long view.

“I figure, lobsters have been here millions of years,” he says, foot propped up on the console of his boat in Vinalhaven Harbor. “I think there’ll always be lobsters.”

Some worry about, or even predict, a collapse in the fishery—even after fishermen enjoyed record-breaking catches in the last two years.

Though he is young, Beckman isn’t a neophyte, ignorant of the recent past and its highs and lows. A fourth-generation lobsterman, he remembers his father, Sig Beckman, taking him fishing when he was just five years old. At seven, he was fishing traps from a canoe.

But then came the summer of 2012, when the price plummeted. It was Beckman’s first summer home after a year at the University of Maine at Presque Isle, and fishermen on Vinalhaven—which lands the second most lobster in the state—”were going on strike,” tying up their boats, rather than lose money by firing up their engines and heading out.

“I was glad to be going back to school,” he says.

This late June, the catch has been light, with “shedders”—the lobsters that have burrowed under rocks to find safety during and after their molt—just beginning to emerge. Blake Reidy, Beckman’s girlfriend and sometime stern man before she returns to the University of New England in the fall, observes that she has found herself tossing a lot of lobster overboard that are half-an-inch shy of being legal.

Once the shed is over, the lobster will grow fast, Beckman says, so the slow early catch “might even out” in the coming weeks.

“This is probably the worst spring I’ve had,” he says, which he attributes to the cold waters left over from the brutal winter; the lobster are hunkering down. But he feels good about his future on the water.

A collapse in the lobster population may come, Beckman allows, but “not in my lifetime.”

When Beckman’s great-grandfather was fishing, there was little long-range thinking and planning in the business. Today, the state Department of Marine Resources (DMR) and half a dozen other organizations devoted to studying and supporting the lobster industry keep a close watch on the fishery.

The most recent “settlement” survey—which samples newly hatched and juvenile lobster as they settle in the water column—conducted by DMR and its counterparts in coastal New England and eastern Canada suggests a smaller adult lobster population is coming.

The 2014 update of the survey notes continued “dramatic shifts in lobster populations that may have important consequences for the fishery,” describing “another mediocre showing in 2014.”

Densities of newly settled lobster “were highest in the central and eastern Gulf of Maine,” and lowest in southern New England, suggesting what fishery scientists have said for some time, that warmer waters are driving the populations north.

The bottom line is that “generally, fishery recruitment will begin to fall back to long-term averages in the next several years,” the report concluded.

But the law of supply and demand is complicated when it comes to lobster. Both supply and demand rise in the summer and fall in the winter (except during the Christmas and New Years holidays, and during some Asian holidays).

Further complicating matters is the variety of lobster: shedders, also known as soft-shell; hard shell and selects. Each may end up in very different markets.

At Linda Bean’s Perfect Maine buying station on the harbor where Beckman sells his catch, he was getting $3.10 a pound for shedders, $5.10 for hard shell and $5.60 for selects. In addition to the per-pound price, Bean pays a daily bonus of 50 cents per pound. She was selling herring as bait at $25 per bushel and pogies at $36 per bushel.

In Vinalhaven, fishermen have three options for selling their catch: Bean’s large operation (the company did not return phone messages asking for an interview), with its new buildings and docks (and elevator for hauling up full lobster crates, which Beckman likes); two “smack” boats that travel out from the mainland to buy and transport the lobster back to market in an open well; and the nonprofit Vinalhaven Lobsterman’s Coop.

Emily Lane has worked with the coop for years, helping rescue it, along with the late Ted Johansen, from near bankruptcy a decade ago. Lane confirmed Beckman’s observations about the cold waters depressing the catch. Similar results have been seen in Canada this late spring and early summer.

But there is cause for optimism.

“There’s a huge demand, particularly in Asia,” Lane said, “and the live market is very strong.”

Lobster processors, which buy in large amounts to create frozen and value-added products, have had to wait until larger catches are available, she said, slowing that market.

An effort that could help boost and stabilize the price that Beckman gets for his lobsters is just getting into high gear. The Maine Lobster Marketing Collaborative, created almost two years ago and funded with fees from fisherman and dealers, has contracted with a national firm to build demand for and understanding of the product.

The collaborative’s contractor, Weber Shandwick, is working to network with top chefs and food writers around the country, pushing the “new shell” lobster, a category of catch that often doesn’t fetch a high price in part because it doesn’t survive shipping in as high rates as hard shell, as a delicacy.

The collaborative launched a new website (lobsterfrommaine.com) in mid-June, which toots the horn for “Maine New Shell,” using such slogans as “Everything Else is Just Lobster” and referring to Maine lobster as “Hand Caught.”

Matt Jacobson, the collaborative’s director, who came on board last summer, told its board members at a recent meeting that he’s focusing on promotion events, such as the Lobster Roll Rumble in New York City and the National Restaurant Association’s annual conference in Chicago, which draws 85,000.

Jacobson attended the Chicago event and found “every food on the planet, except for lobster. I don’t understand why we’re not there.”

Wisconsin, he noted, had its own pavilion, touting its cheese products. Though paying for such presence can be costly, Jacobson believes ground can be gained in the Midwest.

Frank Gotwals, a lobsterman from Stonington who serves on the collaborative’s board, echoed that view, suggesting the Chicago event might be more fruitful than Boston’s seafood show, where most attending probably know about Maine lobster.

Another focus will be the 18-29 population group, which, Jacobson says, eats out 50 percent more than any other age segment. Ninety percent of lobster is consumed in restaurants, he adds, which supports targeting chefs.

“Anything we can do to promote lobster,” she said, will create “avenues to move the product whenever it’s backed up,” such as was the case in during the high-volume catch of 2012.

Another factor is planning for hard times, Lane says.

Older fishermen “remember the times when there were very few lobster,” while younger fishermen “have only seen the banner years.”

Bleak settlement forecasts remind the industry that “We’re still at the mercy of Mother Nature,” she says.

Lane credits fishermen like Beckman for his approach to what is, after all, a small, owner-operated business. His 21-foot boat, powered by a 115 horsepower Yamaha outboard, isn’t likely to win any beauty contests. But it’s paid for, in cash.

And he works hard. He’s fishing 350 traps and owns 450, which are, like the boat, paid for. In addition to hauling his own traps, he works as a stern man on his father’s boat.

But it’s a great way to make a living on the island he loves.

“For me, this is better than any job around here,” Beckman says. 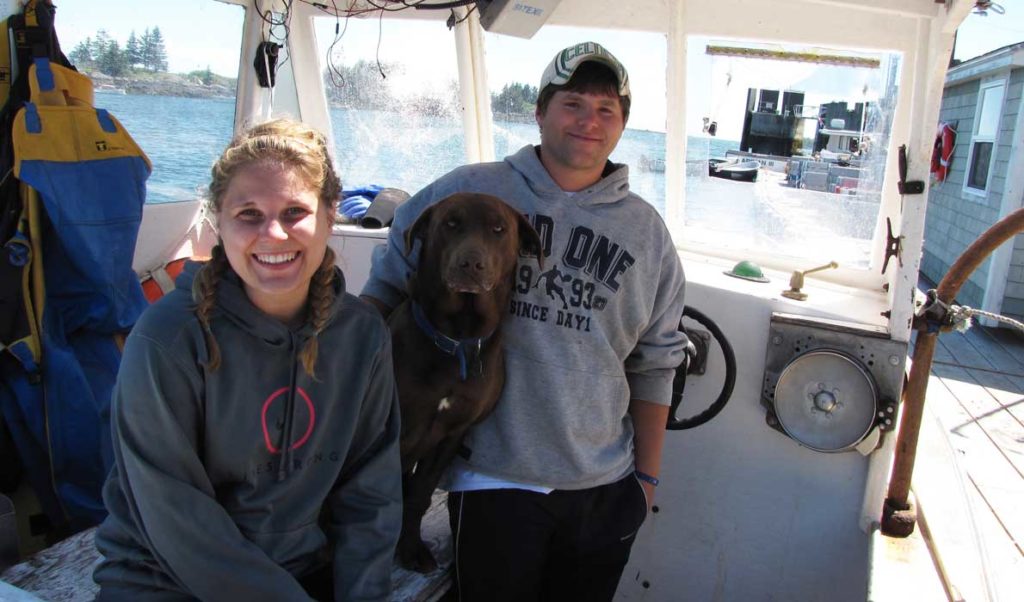