VINALHAVEN — At the end of a typical summer day, an 18-wheeler will roll onto the mainland-bound ferry loaded with 300-400 crates of live lobster packed in seaweed. The lobster—40,000 pounds of it, provided by the island’s lobster coop—is then trucked to a dealer who will sort and distribute the product to restaurants, processors and others.

Creating and maintaining this vital link between fisherman and market is what the Vinalhaven Fisherman’s Coop has been doing since the 1970s. The coop is one of several in Maine, and is second only in volume to Stonington Lobster Coop, selling 3 million pounds a year.

Ted Johansen, a retired businessman who has been advising the coop for the last eight years, believes the fishermen-owned group is the best option for selling lobster.

“It’s difficult for anyone to compete with a well-run coop,” he asserted.

In simple terms, a coop allows individual, self-employed fishermen to band together and offer their catch to a larger market. The strategy ensures a better price for fishermen and a reliable source of product for buyers.

The 80 members pay a $200 membership fee to join and must win an approval vote from the coop’s board of directors. The Vinalhaven Fishermen’s Coop does not insist that members sell only to it, though many coops do require that exclusivity.

“We expect you to sell a meaningful amount of the lobster you catch” to the coop, Johansen said, although it also buys from non-members.

If members are not active with the coop for three years—either not fishing or selling elsewhere—a vote of the members can revoke a fisherman’s membership. Revocation also is possible if a member violates the rules—written and unwritten—of the fishery.

Though the coop can boast of its strength-in-numbers, it functions in a complex business environment.

In Carver’s Harbor, where it’s almost possible to walk from lobster boat to lobster boat at the height of the season, fishermen have two alternatives to selling their catch to the coop.

The new kid on the block is Linda Bean’s Perfect Maine Lobster. The L.L. Bean heir launched her business in Port Clyde in 2007 and more recently built two large steel-sided buildings on the harbor, where she buys lobster from boats.

With Bean’s businesses a dominant physical presence on the harbor and with the competitive price she pays to fishermen for lobster, Johansen and others worry that Vinalhaven could become a company town with just one buyer.

(Bean was contacted for an interview but was unavailable.)

At the same time, he tips his hat to Bean.

“She’s done a great job with her marketing,” he said. “I give her credit for what she’s done,” making Maine lobster understood as a distinct brand.

The third option for island fishermen is one of two smack boats that come from Rockland. Smacks were a 19th century innovation that allowed lobster to be picked up at remote locations, such as islands, and kept alive in a built-in well through which seawater circulated as the product was delivered to urban centers.

The boat arrives in Carver’s Harbor most days and buys lobster from fishermen. Not having to maintain a wharf on the harbor, the smacks have lower overhead costs and can be competitive in what they pay, Johansen said.

In addition to buying lobster, most coops—and the Bean-owned wharfs and the smack boats—sell bait and fuel to fishermen. Johansen said the coop will let members run a tab early in the season to buy their bait and fuel while they await the catch.

“We’ve got guys who don’t get into the black until June,” he said. “We’ve chosen to sell the fuel and bait at cost [to members].” Even so, diesel sells for 40 cents to 50 cents higher on the island than on the mainland. For non-members, the coop is the island gas station. Bait is sold for $25 or so a bushel; these days, the coop favors frozen redfish and rockfish for bait.

Johansen , 77, and his wife moved to Vinalhaven in 1999. He had owned and operated Falcon Shoe Co., which he launched in 1963, in the Lewiston-Auburn area. He later sold the company.

Having lobstered as a teen in his native Swampscot, Mass., he was eager to return to fishing.

“I love the ocean. That first winter I was here, I ‘sterned’ for my neighbor,” Johansen remembers.

The coop was having some financial problems, and Johansen was asked to help out.

The coop had been selling its catch to three different dealers, but more recently, it struck a deal with one large firm, which Johansen declined to name.

“Auctioning off our catch every day is not the way to go,” Johansen said. “You’re talking about a live product, so it’s not a long shelf life.” And while fishermen often tell the tales of dealers getting $30 or $40 per pound for lobster in restaurants in Europe or elsewhere, the counter-argument is that dealers must invest in storage, transportation, and sales staff and absorb the loss of dead lobster.

“When you’ve got 400 crates of lobster to move,” as regularly happens in the summer, “you’ve got to have someone who can take them,” he said

The dealer must sort the catch by size, shell (hard or soft) and quality and then distribute the lobster to the appropriate market. Some are cooked and packaged or used in such products as lobster pot pies, others provide tails that are frozen for the cruise ship market, and still others go fresh to restaurants.

Part of his job is to keep the processor honest. The coop saw the price drop by 50 cents a pound two days earlier, and Johansen worked the phone and learned that the price dropped by the same amount in Jonesport, suggesting that it was an early season correction.

Still, “We beat them up a little bit,” he said, when the price drops, hoping to get the best price possible.

The per-pound price fishermen get is not all it seems.

Coops pay bonuses to members, Johansen explained, usually in the late fall when the season winds down. The coop computes the cost of running the wharf—infrastructure, handling, staff—and holds back some of the funds it receives from the dealer. Typically, that hold-back exceeds the cost of doing business, so the nonprofit coop distributes the money to members on a per-pound basis; last year, the Vinalhaven coop issued 68 cents to members for each pound of lobster they provided in the course of the season.

Fishermen like the bonus, he said, seeing it as a savings account. Many use it to pay for new boat engines, trucks and boat repairs or even for a vacation to some warmer climate.

But in the competitive buying market, the Bean operations and the smack boats have begun matching and topping the bonus payments and paying it at the time of purchase—not at the end of the season.

The coop is considering offering the up-front bonus deal, but perhaps holding back a portion to cover the interest it must pay on loans to allow it to operate through the lean months.

These days, he is looking at finding another person to take over his role. Johansen is afflicted with a rare muscular degenerative disease. He works from his home, which had been a boarding house for quarry workers that he and his wife renovated.

That replacement would do well to spend time with Johansen. His calm, no-nonsense take on the sometime volatile world of lobstering conveys a depth of business knowledge. Where others see conspiracy and collusion, he sees nuance. Johansen believes coops can have more clout. 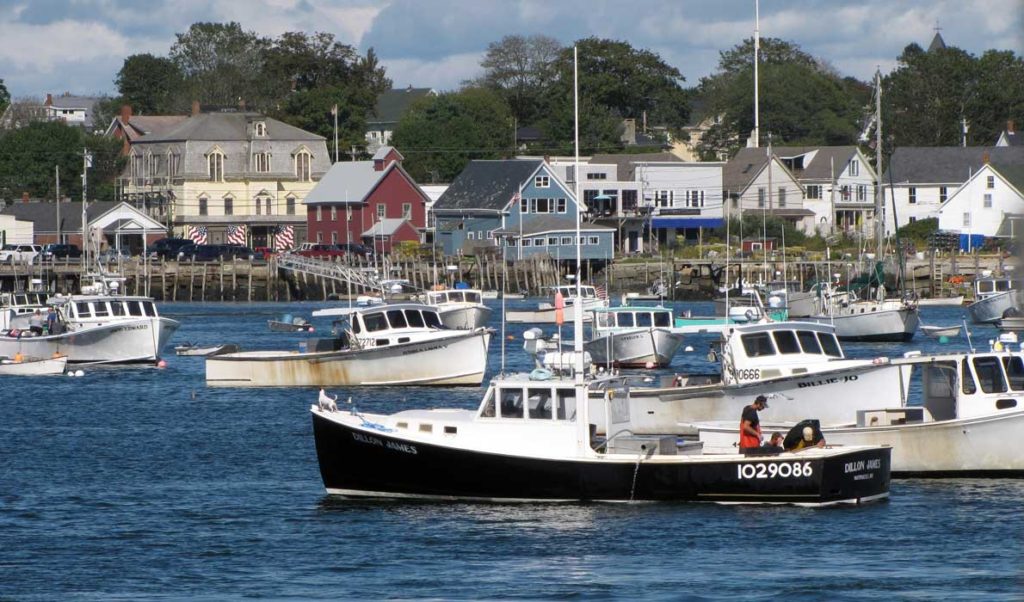 The end of the day on Carver's Harbor

Harvesting the ‘fish that feeds all’