Last year saw another record-setting catch, both in pounds and dollar value, for the Maine lobster fishery. The numbers, announced by the state’s Department of Marine Resources at the March 3 Maine Fishermen’s Forum in Rockport, included more than 130 million pounds, for which harvesters were paid $533 million.

Including bonuses paid to harvesters by lobster cooperatives, reported by 14 of the 19 coops, the value of landings was more than $547 million.

The per-pound price average was at $4.07, the second consecutive year it topped the $4 threshold, DMR reported.

Last year was the first in which the 130 million pound threshold was crossed, and the fifth consecutive year in which 120 million pounds or more were landed.

To put those numbers in perspective, catches were at about 25 million pounds annually in the mid-1980s, according to David Cousens, president of the Maine Lobstermen’s Community Alliance, and in the 40-50-million-pound range in the mid-1990s.

Both scientists and harvesters acknowledge that the current record-setting catches may be short-lived, as warming waters appear to be driving lobster north and east. Fishermen like Cousens have expressed concern about what they are seeing in the water.

Long Island Sound fishermen were catching 11 million pounds a year in the 1970s, but last year caught about 50,000 pounds.

In the 1970s, he told a group in Portland last month, the lobster molt, or shed, was so consistent it could be expected July 17-19. Water temperatures in Maine never reached 60 degrees. By the mid-2000s, water temperatures were above 60 degrees from the end of July to the end of September, Cousens said.

In 2012, when waters were the warmest to date, lobster landings hit 127 million pounds, but the shed came early, causing market disruptions, and a glut of perishable product depressed prices.

Cousens noted that if water temperatures rise a few more degrees, lobster hatchlings could perish before they settle to the bottom.

Still, the news is good for now. Cousens said Penobscot Bay east to the Canadian border is “the sweet spot” for the fishery.

Maine’s softshell clam industry had an overall value of $15 million last year, a 13 percent decline per-pound. Landings dropped by 20 percent. A factor in those lower landings and value was closures between Mount Desert Island to the Canadian border because of concerns about amnesic shellfish poisoning.

Maine’s elver fishery was again the most lucrative commercial fishery on a per-pound basis at $1,430 a pound. Maine harvesters netted 9,400 of the 9,688 available pounds of quota for an overall value of $13 million, an increase of more than $2 million from the previous year. 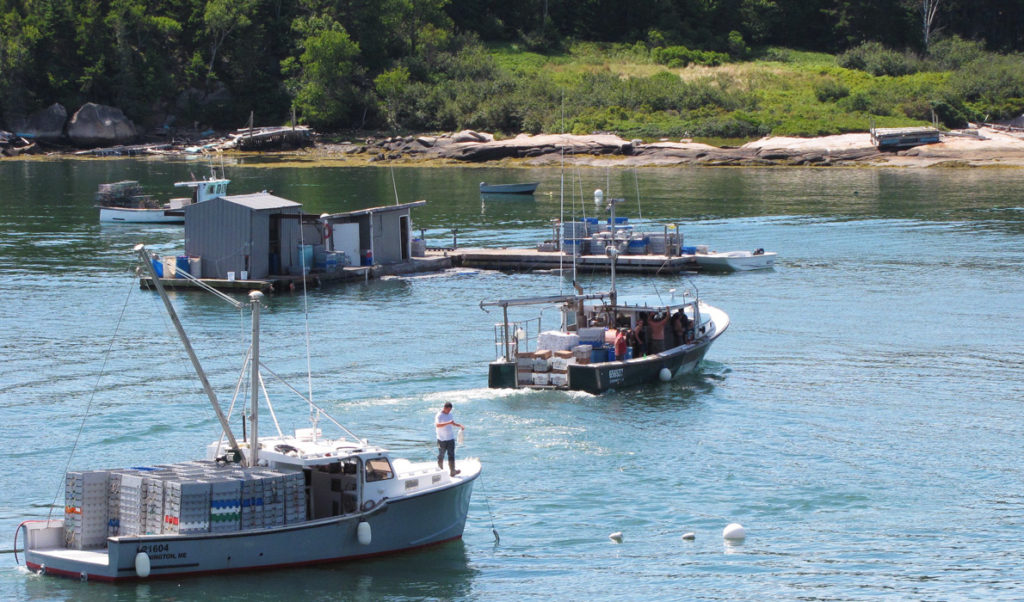 A fishing boat brings its catch to a buying station in Stonington.