The Lighthouse & Me: History, Memoir, & Imagination

It isn’t always the case that storytelling in support of a larger purpose—fundraising for example—can stand on its own as a satisfying literary experience. But The Lighthouse & Me: History, Memoir, & Imagination pulls off that trick nicely, and author Jeffrey Burke’s subtitle is his recipe for success.

The lighthouse is the Isle au Haut lighthouse and Burke is on the town of Isle au Haut’s lighthouse committee, working to raise about $500,000 to restore the structure. He and his wife Judi are retired innkeepers who transformed the adjacent keeper’s house and outbuildings there into a bed and breakfast they operated from 1986 to 2012.

The memoir component is the various experiences of lighthouse life Burke can illuminate, including the effects of living in that setting, memorable events with inn guests, and his wife’s childhood as the daughter of a lighthouse keeper.

The history is a comprehensive one, and I was delighted to find it as fascinating as it is detailed. And the imagination component is the fantasizing by Burke as he “fills in” possible dialogue, imagery, and explanations for past events. Burke integrates the combination of those smoothly, injecting humor and well-chosen, colorful anecdotes as well as illustrations including portraits, diagrams, historical documents, photographs, and wonderful hand-drawn maps. 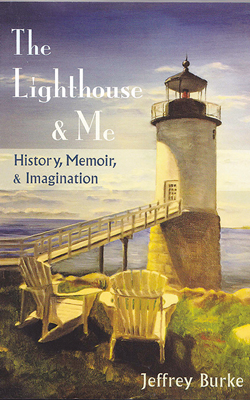 Of course one expects there are many spirits lurking in such a place. One anecdote shared is based on the testimony of Lisa Louise Turner, a native islander and talented master of many skills. Availing themselves of her expertise with jobs at the inn, the Burkes also had her pronouncement about the pantry: “It’s haunted.” Lisa reported hearing an incessant whine there, as if someone were complaining.

A guest, self-described as a devotee of the occult, was asked to check through the house for spirit hot spots and as he entered the pantry, the medallion he used to register activity went “berserk.” He pronounced it a space that “seethes with rancid karma!”

As Lisa left work that day, she said something to the effect that the household spirit was just “an average one” and only needed to be tolerated. She lumped it right in with other problems people from away have: ticks, deer eating the arugula, and mosquitoes.

Isle au Haut Lighthouse, also known as Robinson Point Fog Station, was built in 1907 after fishermen made clear the need for that assistance. The ground fishing fleet was busiest in the lower East Penobscot Bay area in November and December when catches of haddock, cod, and hake were largest. But the timing coincided with ferocious nor’easters. Boats with their trawls set were reluctant to leave until they absolutely had to seek safety. That best harbor was Isle au Haut’s, especially well-sheltered from northeast and easterly winds.

In 1998, the lighthouse was transferred from the federal government to the town, and while it continues to serve as a registered aid to navigation, it is now maintained by the town’s lighthouse committee. As Burke explains, because it is on the National Register of Historic Places, the state office has high standards: All repairs have to match the original materials. This includes using mortar exactly the same color, and old-growth, straight-grained oak having at least 11 growth rings per inch. (As he concludes that description, Burke writes: “Imagine that!”) The original fog bell is an essential feature the lighthouse awaits the return of.

Those who love the lighthouse are helping in various ways. Two women working on Isle au Haut, one an Island Institute fellow and one a National Park Service ranger, swam together around the island this past summer (in 1-2 mile segments) as a fundraiser. And all proceeds from the sale of this book go to that effort. The book is available for purchase at www.isleauhautlighthouse.org.

Tina Cohen is a summer resident of Vinalhaven